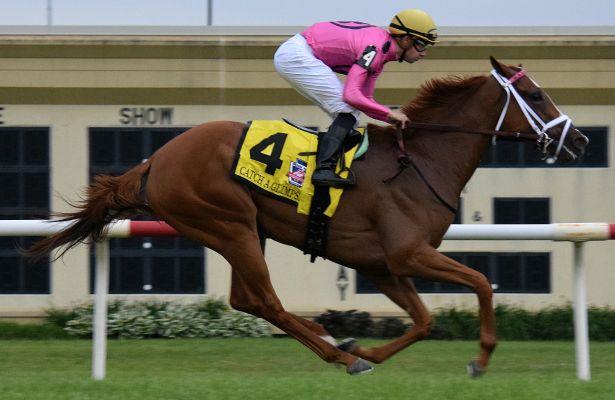 Run for the first time just 3 1/2 years ago on June 2, 2013, Penn Mile runners have already made their presence felt on some of the biggest turf stages in the country.  Jack Milton, third in the inaugural Penn Mile, would go on to win the Makers 46 Mile (G1) at Keeneland in 2015.  2014 winner Bobby’s Kitten hit his career high note taking the Breeders’ Cup Turf Sprint (G1) later that year while 2015 champ Force the Pass won the Belmont Derby (G1) in his subsequent start.  This year, the one mile test for three-year-olds produced eventual Secretariat (G1) victor Beach Patrol, while the Penn Mile itself was won by 2015 Breeders’ Cup Juvenile Fillies Turf (G1) heroine Catch a Glimpse.

For good measure, throw in a pair of American Turf (G2) winners and a quartet of Kentucky Derby starters in the Penn Mile gate since June 2013 and after only four runnings, the 2017 Penn Mile will become the first ever Grade 2 contested at Penn National, being given that designation by the American Graded Stakes Committee at its 2016 meeting this week.  The Penn Mile was one of only five graded races in the United States that was upgraded for 2017.

While it’s been popular with horsemen, it’s also been popular with fans and horseplayers as the Penn Mile card has also easily produced the two biggest wagering days in track history with $3,827,158 handled on the 2015 card and $3,658,996 bet in 2013.

“We’re incredibly proud of the job our entire team has done in elevating the Penn Mile into the upper echelon of three-year-old turf races in the country,” said Penn National’s Director of Racing Eric Johnston.  “We’re once again looking forward to putting on a great show for the fans of our track when the Penn Mile is run as a Grade 2 in 2017.”

The date for the 2017 Penn Mile is expected to be released in the coming weeks along with the rest of Penn National’s stakes schedule.

The Penn Mile joins the Charles Town Classic as the only two Grade 2’s at Penn National Gaming owned venues while its tracks host a trio of Grade 3’s in the Houston Ladies Classic and John Connally Turf Cup at Sam Houston and Charles Town Oaks at Charles Town.  Additionally, the $300,000 Zia Park Oaks, won recently by multiple graded stakes winner Family Tree, was given a bump to Listed status for its next running.