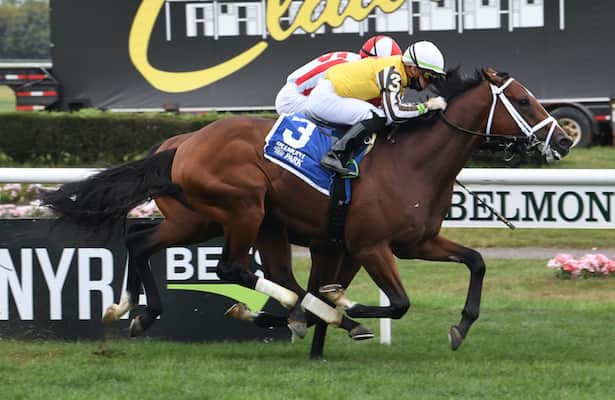 The $400,000 Grade 2 Penn Mile, which drew a field of eight 3-year-olds, will be run this Friday on the evening card at Penn National.

Here is a full-field analysis for the Penn Mile with the official track morning line odds. With post-time scheduled for 7:45 p.m. EDT, the Penn Mile is carded as race 6 out of 11.

1. Annapolis (9-5 – War Front – Todd Pletcher / Irad Ortiz, Jr. – 2: 2-0-0 - $165,000) Annapolis will make his 2022 debut in the Penn Mile after winning both of his starts as a 2-year-old. The home-bred son of War Front won his first start at Saratoga by more than four lengths with a late rally as a heavy favorite going 1 1/16 miles on the grass. He stepped right up to record a Grade 2 victory in the Pilgrim at Belmont Park for Todd Pletcher but this time he pressed the pace beating a pair of Chad Brown runners. Annapolis is the only graded stakes winner in the field. The horse to beat.

2. Wow Whata Summer (12-1 – Summer Front – James Lawrence II / Tyler Conner – 6: 1-0-2 - $63,200) This son of Summer Front has actually never crossed the finish line in front. He was placed first in his debut at Colonial Downs in July after getting bumped turning for home. He then ran four more times as a juvenile, three times in stakes with a third and a pair of fourth-place finishes. Wow Whata Summer ran third in an allowance at Laurel Park in his first start of this year in a turf sprint. His best results were in sprints. Toss.

3. Uncaptured Spirit (10-1 – Uncaptured – Mark Shuman / Angel Suarez – 7: 2-1-2 - $81,680) Uncaptured Spirit has lots of experience in the Mid-Atlantic with nine starts on dirt at three different tracks. He made his first turf start in April at Laurel when he won a sprint with a front-end effort in a first-level allowance. The Florida-bred will race two-turns for the first time in the Penn Mile. Toss.

4. Ohtwoohthreefive (8-1 – Union Rags – George Weaver / Kendrick Carmouche – 10: 1-2-3 - $124,280) This son of Union Rags broke his maiden in his fourth try on the grass at Belmont Park in October and since then has three stakes races and a pair of allowances without a victory. He was second in the Central Park at Aqueduct and fourth in the aforementioned Woodhaven. Use underneath.

5. Noneedtoworry (20-1 – Algorithms – Herold Wylie / Silvestre Gonzalez – 9: 2-1-1 - $77,120) Noneedtoworry will make his first start on the turf after nine races on the dirt. Based at Parx Racing, he broke his maiden there along with winning an allowance during the winter. Since then, he tried stakes company three times, twice on the Kentucky Derby trail at Aqueduct and most recently in the Tesio at Laurel, without finishing better than fifth. Not sure why to expect him to be able to handle graded stakes company on the grass. Toss.

6. Witty (12-1 – Great Notion – McLane Hendriks / Carol Cedeno – 4: 3-1-0 - $204,000) Witty is the winner of his last three starts as he moved from a maiden victory at Parx to win a Pennsylvania-bred juvenile stake there and then he beat open company by seven lengths in the Spectacular Bid at Laurel in January. He has been off since then and has been training at Fair Hill for connections that certainly know a turf horse when they see one. There is plenty of opportunity to exercise on grass at that Maryland training center. Live longshot.

7. Red Danger (5-2 – Orb – Brian Lynch / Paco Lopez – 10: 3-2-0 - $486,182) Red Danger is the leading money winner in the race based on a couple of big purse victories early in his career. He broke his maiden at Saratoga at second asking and then won the $500,000 Juvenile Sprint at Kentucky Downs with a late rally. Since then, he placed in the Street Sense at Churchill Downs on the main track and won the turf Pulpit at Gulfstream Park to end his juvenile campaign. This year, he ran in four turf stakes picking up another second in Florida. Red Danger faced quality competition in his 10 starts which means he should be comfortable in this Grade 2 field. Win contender.

8. Fort Washington (7-2 – War Front – Shug McGaughey / Flavien Prat – 4: 1-1-2 - $215,090) Fort Washington was meant to run on the turf and did so in his four starts. He needed two tries to break his maiden which he did with a late run at Aqueduct in November. He returned to the races in March at Tampa Bay Downs and was third in the Columbia Stakes. In April, Fort Washington was beaten by a nose in the Woodhaven at Aqueduct by a Chad Brown runner, who is currently undefeated in three starts. Win contender.

Summary: The Penn Mile drew an interesting field of eight 3-year-olds lead by Annapolis who was the winner of both of his races for Todd Pletcher last year. He has been off since winning the Pilgrim (G2) in October, but has been training steadily in Florida and at Belmont. Annapolis is the only graded stakes winner in the field.

Fort Washington, Red Danger, and Witty have run well in stakes races and are the main threats to Annapolis.

Witty is an impressive winner of his last three starts on the dirt and the move to the turf is interesting especially with the 12-1 morning line odds. That makes him a live longshot, while Annapolis is clearly the horse to beat.