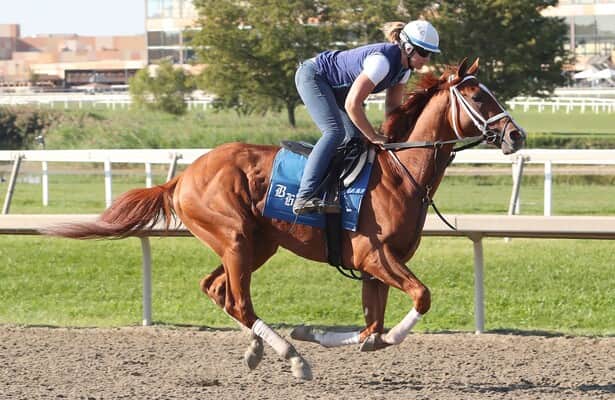 Brad Cox admitted he was not sure how Cyberknife and Tawny Port will like – or not like – the main track at Parx Racing, where they will run Saturday in the Grade 1, $1 million Pennsylvania Derby.

Cox amplified that last part with a wry laugh as he looked forward to seeing his two graded-stakes winners compete against nine other 3-year-olds in what may be a fork in the road to the Nov. 5 running of the $6 million Breeders’ Cup Classic at Keeneland.

Cyberknife (3-1), the only 3-year-old dirt male with two Grade 1 route wins in the U.S. this year, was made the second choice on the morning line. Only Bob Baffert’s shipper Taiba (5-2), who was a close second to Cyberknife on July 23 in the Haskell (G1), carried shorter odds.

“Once again, hopefully he likes the track,” Cox said this week in an interview for Horse Racing Nation’s Ron Flatter Racing Pod. “He settled in there (Tuesday) night. He had a good gallop over the track (Wednesday) morning.”

Tawny Port (6-1), the fourth choice on the morning line, comes back from a competitive, third-place finish July 30 in the Jim Dandy (G2) after a victory the month before in the Ohio Derby (G3).

“Hopefully he takes to the track,” Cox said.

So what is it about Parx, where pacesetters and stalkers have won seven of the last 11 runnings of the Penn Derby?

“It’s probably a little bit more of a deeper, sandy or looser track,” Cox said. “I’m not knocking it or complaining. It just seems to be some things with the track that some horses just don’t take to it. Some horses don’t take to Churchill. We’re hopeful our two do take to it.”

The reigning two-time Eclipse Award winner as North America’s top trainer admitted he is not long on experience at the Bensalem, Pa., track. Since he first took a horse to what still was commonly referred to as Philadelphia Park in 2009, Cox has had three winners from 25 starters there. After Shopaholic scored in a waiver-claiming race in 2015, he won with Fulsome in 2021 and Best Actor last month in the two most recent runnings of the Smarty Jones (G3). Fulsome went on to finish fourth in the 2021 Penn Derby, Cox’s only starter in that race until now.

Since Travers (G1) winner Epicenter is being trained by Steve Asmussen up to the Breeders’ Cup Classic, he may be seen as getting a bye to the final round of the division championship. With Grade 1 winners Cyberknife, Taiba, Zandon (5-1) and White Abarrio (8-1) going Saturday, the Penn Derby may be a de-facto semifinal for 3-year-old colts.

Cyberknife and Zandon, who finished second and third in the 1 1/4-mile Travers last month at Saratoga, are cutting back to Saturday’s 1 1/8-mile distance of the Penn Derby.

“I think it’s only a positive,” Cox said of Cyberknife, who led the Travers field from out of the gate until Epicenter caught him near the end of the second turn. “He obviously did most of the dirty work there in the Travers. The way I saw it, we ran a horse that was doing really well, and he just happened to be second best. He held off some other horses (Zandon and Kentucky Derby winner Rich Strike) for his second-place finish.”

Cox did not necessarily expect – or hope for – the same sort of trip from Florent Géroux on Saturday. West Virginia Derby (G3) runner-up We the People (12-1) seemed certain to try for the early lead with Taiba, Fountain of Youth (G2) victor Simplification (10-1) and allowance-winning shipper B Dawk (20-1) in the mix to keep Cyberknife company.

“I think there are some horses that are naturally quicker away from the gate than he is,” Cox said. “I could envision maybe the Haskell as a trip he could get with maybe three or four in front of him, tracking down on the inside. I’m OK with that trip.”

A stalking trip also worked for Cyberknife in his early Grade 1 victory this year at Oaklawn.

“In the Arkansas Derby they kind of got away from him a little bit into the first turn,” Cox said. “We the People was in that race as well. (Cyberknife) was able to sit down on the inside. We just kind of want to break and go forward. If he gets covered up, that’s fine, just as long as he’s traveling well and into the bridle.”

Tawny Port, who will end a nearly two-month break when he starts Saturday, probably would do best with jockey Irad Ortiz Jr. chasing a faster pace. The $430,000 Pioneerof the Nile colt owned by John and Elizabeth Fort conceded between 3 3/4 and seven lengths early in his three victories this year, including the 1 1/16-mile Lexington (G3) and the 1 1/8-mile Ohio Derby (G3).

Cox said the Penn Derby became the long-term goal for Tawny Port because of how he performed going nine furlongs at Saratoga.

“As soon as the Jim Dandy was completed, we circled it on our calendar and worked our way back,” Cox said. “We brought him back to Churchill. He’s been working extremely well here. He is a horse that appreciates the distance. He likes the mile-and-an-eighth, maybe even more ground, and he should take to it.”

On the other hand, the Penn Derby was not always on Cyberknife’s agenda. The $400,000 Gun Runner colt who is owned by Al Gold and is committed to a post-racing breeding career at Spendthrift Farm will be racing for the 11th time since his debut 363 days earlier.

“We didn’t necessarily zero in on the PA Derby,” Cox said. “With how he worked a week-and-a-half ago (four furlongs in 49.0 seconds), I was just super happy with the way he did it. He was by himself and well, well within himself. It was just a maintenance work, but it’s how he presented himself with his energy level, color, his coat, his weight. Everything was positive.

“A million-dollar opportunity, another Grade 1, I think it would add to his stallion résumé if he was able to win the Pennsylvania Derby. We obviously would like to get him to the Breeders’ Cup and felt, as long as he’s doing well, we may take a swing at a Grade 1 here in late September.”

Cox said he planned to fly Saturday morning from Kentucky to Pennsylvania. The National Weather Service predicted a sunny Saturday with a high near 72 at Parx.