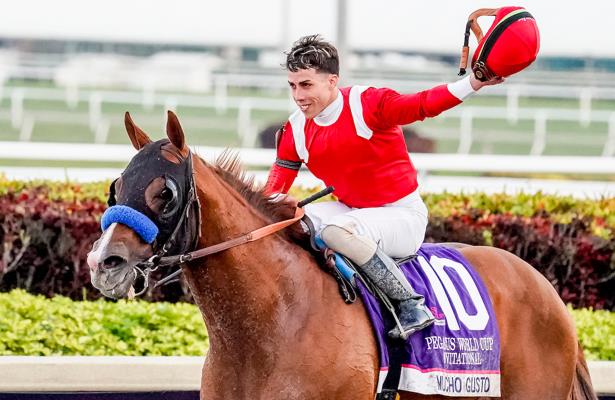 Despite a change in ownership to a member of Saudi Arabia’s royal family and a series Grade 3 victories during his sophomore season, Mucho Gusto didn’t initially receive an invitation to the $20 million Saudi Cup, trainer Bob Baffert said Saturday.

So Baffert told himself, “‘You know what, I’m just going to take a shot at the mile-and-an-eighth and maybe that will get him ready.’”

It did, with Mucho Gusto punching his ticket for an overseas trip by way of a victory in the Grade 1, $3 million Pegasus World Cup at Gulfstream Park.

The 4-year-old son of Mucho Macho Man came in off four straight bullet morning works back home at Santa Anita Park, though he hadn’t run since finishing fourth last September in the Oklahoma Derby (G3).

Until this week, Baffert had considered keeping Mucho Gusto at Santa Anita for the upcoming San Pasqual (G2). A six-furlong work from the gate nine days ago changed priority to the Pegasus.

“Who would know that the race fell apart there [with the scratch of Omaha Beach and Spun to Run], unfortunately,” Baffert said.

Mucho Gusto swung out off the turn and powered to a 4 1/2-length victory over pace-setting Mr Freeze, with War Story third in the Pegasus’ field of 10.

Per the Saudi Cup’s website, the Pegasus winner is guaranteed an invitation to the Feb. 29 race. Before the Pegasus’ purse plunged from $9 million, however, its entire top three were said to receive automatic invitations; that no longer appears so.

Maximum Security is expected to lead the Saudi Cup along with top mare Midnight Bisou and McKinzie, another Grade 1 winner from the Baffert barn. A public list of invitations for the race and its lucrative undercard at King Abdulaziz Racetrack have not been released.

The Hall of Famer Baffert left on-site duties for the Pegasus to his assistant, Jimmy Barnes, and watched the race from California.

“He looked great in the warm-up,” Baffert said, with Mucho Gusto his second Pegasus winner following Arrogate in the 2017 edition. “Irad Ortiz did a pretty masterful job. He had me a little bit worried the way he was down inside like that, but he knew what he was doing.

“When he tilted out at the quarter pole, all I could say was, ‘Damn, I wish I would have flown down there!’ But it was pretty exciting.”

Mucho Gusto entered the Pegasus with Grade 3 victories in the Bob Hope Stakes at age 2, as well as the Robert B. Lewis Stakes, Lazaro Barrera Stakes and Affirmed Stakes at 3. He also owns multiple Grade 1 placings, including a second to Maximum Security in the Haskell Invitational.

“We’ve always wanted to see him run a race like that,” Baffert said of the Pegasus, “but he got beat by Maximum Security. He’s been chasing some really good horses. It was a different field today.”