Pegasus mount is a 'dream come true' for Angel Cruz 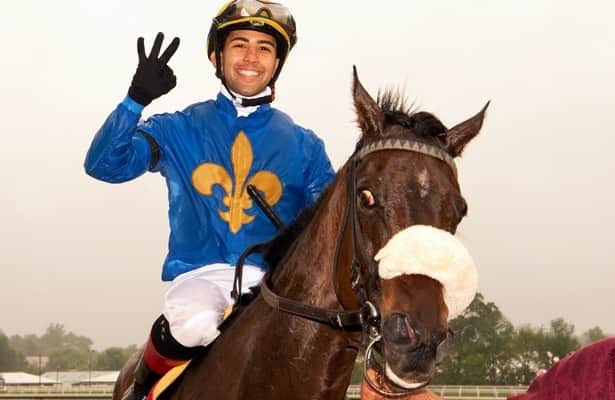 After taking care of business at home, jockey Angel Cruz will head south to take part in the biggest race of his life.

Cruz, 25, is named on four horses when live racing returns Friday to Laurel Park — You Are Awesome in Race 3 and Seattle Ric in Race 9 for trainer Jerry Robb, Dream Happy in Race 5 for trainer Donald Barr, and Golden G in Race 8 for trainer Rodolfo Sanchez-Salomon.

Following the races, the Puerto Rico native and finalist for the 2014 Eclipse Award as champion apprentice will board a plane headed for Hallandale Beach, Fla., where he is named aboard Harpers First Ride in Saturday’s Grade 1, $3 million Pegasus World Cup Invitational at Gulfstream Park.

“I’m so happy. It’s going to be my first time riding in a big race like this, like a big, known race,” Cruz said. “I’ve won big races, but this is going to be my biggest one. It’s a $3 million race. I’m going to be riding against the top riders, and it’s a dream come true.”

Cruz has ridden 5-year-old gelding Harpers First Ride in seven of his 17 lifetime starts, including each of the last five, with five wins and a second. Four of the wins have come in stakes, led by the Pimlico Special (G3) Oct. 3 on the undercard of the Preakness Stakes.

“I love Harper. I have a lot of confidence in him, and he does in me,” Cruz said. “And Claudio, he has him ready. We’re going ready to the Pegasus.”

Of Cruz's 538 career wins, three have come in graded-stakes. Besides Harpers First Ride, he won the Alcibiades (G1) with Dancing Rags and Sycamore (G3) with Renown in 2016 at Keeneland. Their respective trainers, Graham Motion and Elizabeth Voss, both are based in Maryland.

Cruz grew up in Puerto Rico with Eclipse Award-winning brothers Irad Ortiz Jr. and Jose Ortiz, coming to the U.S. at the age of 11. He won his first race on April 8, 2014, at Charles Town and spent time riding in California and New York, where he captured Aqueduct’s 2015 spring title.

Overall, Cruz ranked fifth with 64 wins at Maryland tracks in 2020. His uncle Joel Hiraldo and grandfather Jose Hiraldo were jockeys, and his cousin, 19-year-old John Hiraldo, is a 10-pound apprentice at Laurel. Cruz is represented by agent Paul Plymire.

Harpers First Ride drew Post 8 in a field of 12 for the Pegasus World Cup, where he is listed at 10-1 on the morning line behind multiple Grade 1-winning favorite Knicks Go (5-2), another Maryland-bred. Harpers First Ride arrived at Gulfstream Jan. 11 and had a half-mile breeze over the main track Jan. 16. Gonzalez has been in Florida since Jan. 13.

“I think he’ll love the weather. In the summer, when I first started riding him, he loved the weather,” Cruz said. “Gulfstream is a fast track. I think he’s going to like it because there will be a lot of speed and it’s going to play out for him, I think. Knicks Go and a couple of other horses have speed and I think Harpers is going to do really well over there. Claudio’s going to have him ready. He’ll be a good fit for that race.”