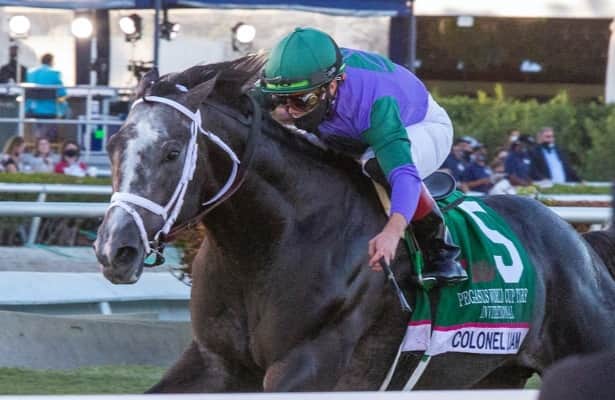 All three races are for 4-year-olds and up. The Pegasus World Cup and Pegasus Turf are both contested at 1 1/8 miles while the Pegasus Filly & Mare Turf, previously known as the Marshua’s River, will be run at 1 1/16 miles.

Robert and Lawana Low’s Colonel Liam won the Tropical Park Derby during the 2020-21 Championship Meet as a prelude to his Pegasus Turf victory by a neck over stablemate Largent. Colonel Liam won on to win the Muniz Memorial (G2) and Turf Classic (G1) and was eighth in last June’s Manhattan (G1) in his most recent start.

“We’ve kind of had in mind that our best approach for him to try and defend his Turf title is just to train up to it. He had some time off and he’s a horse that we think will run well fresh,” Hall of Fame trainer Todd Pletcher said. “He’s put enough into his training that hopefully we can have him ready to run a good race off the layoff.”

Largent and Never Surprised are also on the list of Pegasus Turf invitees. Eclipse Thoroughbred Partners and Twin Creeks Racing Stables’ Largent won the 2020 Fort Lauderdale (G2) as a prep for the Pegasus Turf and went unraced until finishing fourth in the Jan. 8 Tropical Turf (G3) at Gulfstream. Repole Stable’s Never Surprised, placed in three graded-stakes, became a three-time stakes winner with his triumph in Gulfstream’s Tropical Park Derby Dec. 26.

“Never Surprised, we were happy with his race over the course. It’s kind of similar to what Colonel Liam did last year, going from the Tropical Derby to the Pegasus,” Pletcher said.

Atone and Space Traveller are joined on the also-eligible list by Bob and Jackie, English Bee, Flavius and Law Professor.