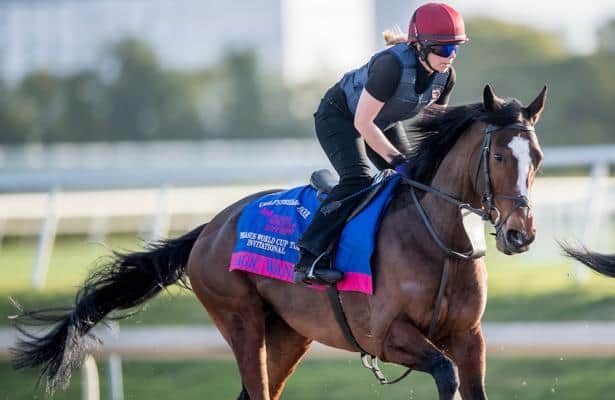 A year after serving as a launchpad for soon-to-be champion Bricks and Mortar’s perfect season, the Grade 1, $1 million Pegasus World Cup Turf runs for the second time Saturday at Gulfstream Park, where the lady looks like the one to beat.

Globetrotting mare Magic Wand ships in for trainer Aidan O’Brien, who sent her to run in six countries on four continents in 2019 with a breakthrough Group 1 victory in Australia. This time, she and Pegasus rivals will run 1 3/16 miles free of race day medication, while connections are no longer required to stake entry fees, hence a diminished purse from the inaugural running.

With Grade/Group 1 winners Arklow, Mo Forza, Next Shares, Sadler’s Joy and Without Parole also signed on, here’s a look at the field with morning line odds, trainers and jockey assignments.

1. Zulu Alpha, 12-1 (Mike Maker/Tyler Gaffalione): Rather than try for a repeat in the W.L. McKon the undercard, this former claimer will seek a bigger prize. But Zulu Alpha has seemed to pick up his best finishes in lucrative events that didn’t include the division’s best. He could be a bit out-classed, and could be covered up with this draw. But the distance is no question.

2. Arklow, 6-1 (Brad Cox/Luis Saez): He’s raced 24 times, yet there’s always some mystery in how he’ll position early in races, falling into fields at different points. Here, with an expected modest pace, he should be close early and has every reason to hit the board.

3. Without Parole, 4-1 (Chad Brown/Frankie Dettori): This Group 1 winner abroad runs for Justify’s breeders, who had some stud options as the horse went off form overseas. Moved to Brown’s barn at the end of 2019, he came off the bench to finish third in the Breeders’ Cup Mile. It was a total reversal, and that he’s back for another season signals this one’s thriving with Brown.

4. Sadler’s Joy, 8-1 (Tom Albertrani/Javier Castellano): Last season didn’t pan out due to a late start that caused him to ultimately miss the Breeders’ Cup. But he may have built some confidence when showing up to win the Red Smith (G3) on Nov. 23 at Aqueduct. It was this Grade 1 winner’s first victory since March of 2018. He'll be looking to rally.

5. Channel Cat, 10-1 (Todd Pletcher/John Velazquez): He’s run respectably in high-level events and stole Saratoga’s Bowling Green (G2) last summer on the front end. Here, Channel Cat won’t get away with much. He looks in to cash a check at the most.

6. Instilled Regard, 10-1 (Chad Brown/Irad Ortiz Jr.): He broke through locally last time in the Fort Lauderdale (G2), getting the decision over a few of his Pegasus rivals. Lightly raced, he’s tried dirt and turf within the last year, and it took a perfect trip against some lower-class foes to get him that victory.

7. Admission Office, 30-1 (Brian Lynch/Flavien Prat): A consistent runner who just turned 5, he knocked on the door of a graded win all throughout 2019. This is a tough ask to get over the hump beginning 2020. He’ll want all of this distance and as fast a pace as possible.

8. Henley’s Joy, 30-1 (Mike Maker/Julien Leparoux): A victory in the Belmont Derby (G1) is an aberration in this colt’s form, with his best finishes since then a pair of fourths. He seems in desperate need of a class break, yet now will go against older competition for the first time in an even tougher spot.

9. Next Shares, 30-1 (Richard Baltas/Jose Valdivia Jr.): Baltas didn’t give up on this veteran last season, and he rewarded connections by winning Del Mar’s Seabiscuit (G2) most recently. That looks like the type of big effort he’s unlikely to repeat. Baltas says his charge also prefers softer turf than he figures to run over Saturday.

11. Sacred Life, 12-1 (Chad Brown/Jose Ortiz): A more recent French import for the Brown barn, he ran a big one to be second to Next Shares in Del Mar’s Nov. 30 Seabiscuit (G2). With a better trip, the order may have been reversed. That race ran at 1 1/16 miles, raising the question of whether his late kick will be as devastating going longer.

12. Magic Wand, 7-2 (Aidan O’Brien/Ryan Moore): She won’t have to tangle with Bricks and Mortar this time. After finishing second in the inaugural Pegasus Turf, the mare’s back following a globetrotting campaign that included a Group 1 victory in Australia. If bet to favoritism here, there’s always a question of when all the travel will catch up.

Tusk, the former claimer and recent local winner at Gulfstream Park, is an also-eligible should any defections occur before the scratch deadline.

Analysis: Without Parole delivered a promising effort in the Breeders’ Cup and, frankly, connections could have retired him then. That they didn’t indicates confidence there’s more to be done, and this looks like an ideal spot with the Pegasus lacking in its international flavor.

Only odd circumstances seem to stop Arklow, while Brown may have another star in Sacred Life. Sadler’s Joy should be respected as a longshot board hitter given his back class and a recent win.