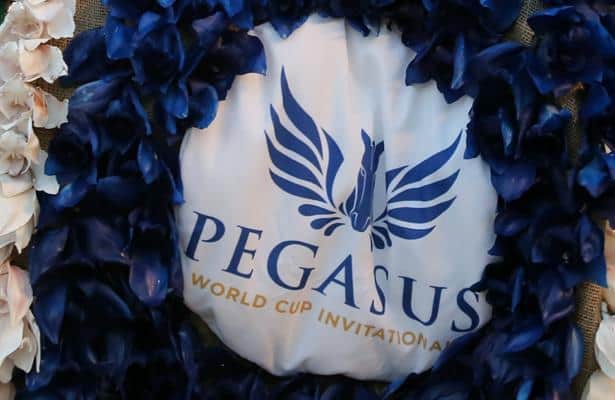 Korea Racing Authority’s Knicks Go, the favorite to be named 2021 Horse of the Year next month, is most prominent among the 12 names on the second invitation list for the 1 1/8-mile stakes for 4-year-olds and up, which will headline a card that also will feature the $1 million Pegasus World Cup Turf Invitational (G1) and the $500,000 Pegasus World Cup Filly & Mare Turf (G3).

Others on both the first and second invitation lists include Breeders’ Cup Dirt Mile winner Life Is Good, Ginobili, Happy Saver, Sir Winston and Super Stock.

The reserves on the second list of invitations include American Theorem, Commandeer, Endorsed, Forewarned and Happy American.

Here are the invitations for the Pegasus World Cup, showing the updated list this week as well as the first list issued last Sunday:

Michael Iavarone’s Flavius, a Juddmonte homebred who was purchased at the Keeneland November sale, has been added to the list of invitees for the Pegasus World Cup Turf Invitational, a 1 1/8-mile turf stakes for 4-year-olds and up.

The multiple-stakes winner formerly trained by Chad Brown replaced Two Emmys among the second invitations. The list once again is headed by defending champion Colonel Liam, who captured last season’s Pegasus Turf by a head over stablemate Largent.

Other horses on both the first and second invitation lists include Channel Cat, Cross Border, Doswell, Field Pass, Hit The Road, March to the Arch, Never Surprised, Point Me By, Sacred Life and Space Traveller.

The reserve invitees on the second list for the Pegasus Turf are Atone, Bob and Jackie, English Bee, and Law Professor.

Others on both the first and second invitation lists for 1 1/16-mile turf race for older fillies and mares include Alms, Bodhicitta, Gift List, In a Hurry, Lady Speightspeare, Nicest, Regal Glory, Shifty She, Summer in Saratoga and Sweet Melania.