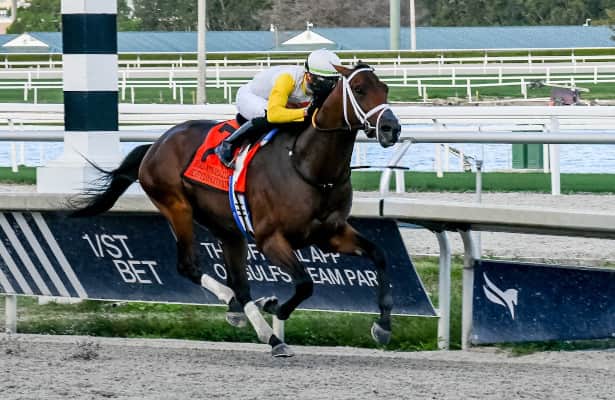 A full field of 12 was drawn for Saturday’s $3 million, Grade 1 Pegasus World Cup Invitational at Gulfstream Park, and Cyberknife was named the 5-2 morning line favorite.

In its six-race history, the Pegasus has been dominated by short prices and favorites with odds ranging from .80-1 last year when Life Is Good was the winner to the longest odds of 3.40-1 by Mucho Gusto in 2020.

Here is full-field analysis for the 1 1/8-mile Pegasus World Cup with the official track morning-line odds. The Pegasus is scheduled as race 13 with post time set for 5:40 p.m. EST.

1. Proxy (9-2 – Tapit – Michael Stidham / Joel Rosario – 13: 4-5-2 - $971,220) Proxy became a Grade 1 winner in the Clark when he pressed the pace against a small field of six. In 2021, he ran three times on the Kentucky Derby trail at Fair Grounds getting a pair of seconds in the Lecomte (G3) and the Risen Star (G2) and fourth in the Louisiana Derby (G2) that was won by Hot Rod Charlie. The Pegasus distance is good for Proxy, but this field is much stronger than the Clark. He is in excellent form and is a consistent performer. Win contender.

2. Simplification (15-1 – Not This Time – Antonio Sano / Paco Lopez – 13: 3-1-4 - $794,500) Simplification finished third in the Harlan’s Holiday (G3) at odds of 2-1. He returned to Gulfstream where he had notched the three victories in his career, but that move back to his home base did not get him back to the winner’s circle. The 2022 Fountain of Youth (G2) was the last win for Simplification. Since then he raced exclusively in graded stakes, mostly Grade 1s. Toss.

3. Ridin with Biden (20-1 – Constitution – Butch Reid / Emisael Jaramillo – 20: 7-5-1 - $475,000) Ridin with Biden ships south from Parx, where he just won two stakes races in a row with pace-pressing efforts. He also was the winner of the long-distance Greenwood Cup (G3) at his home track. As a 3-year-old Ridin with Biden finished second in the Dwyer (G3) at Belmont Park. Toss.

4. White Abarrio (10-1 – Race Day – Saffie Joseph Jr. / Tyler Gaffalione – 10: 4-1-2 - $1,062,550) White Abarrio is another one with all of his victories happening at Gulfstream. He won four of his first five career starts at the Florida track, with the most recent coming in the Florida Derby (G1). His best results since then were a second in the Ohio Derby (G3) and a third in the Cigar Mile (G1). White Abarrio was 16th in the Kentucky Derby, seventh in the Haskell (G1) and fifth in the Penn Derby (G1). Trainer Joseph got two recent bullet works from his stable star in preparation for the Pegasus. Win contender.

5. Defunded (6-1 – Dialed In – Bob Baffert / Irad Ortiz Jr. – 15: 5-3-1 - $608,100) Defunded became a Grade 1 winner in the Awesome Again (G1) at Santa Anita on Oct. 1 and followed that with another front-end victory in the Native Diver (G3) in November. Baffert is the only trainer to win the Pegasus twice, which he did with Arrogate and Mucho Gusto. With those consecutive graded-stakes victories, Defunded is in the best form of his career. Use underneath.

6. Art Collector (10-1 – Bernardini – Bill Mott / Junior Alvarado – 20: 10-1-0 - $2,332,490) Art Collector makes his first start since October, when he was fifth in the Lukas Classic (G2) at Churchill Downs. Before that the now 6-year-old won the Charles Town Classic (G2) with a front-end effort. With wins in half of his starts, you see plenty of layoff lines in his past performances, but this time Art Collector will have to run after four months without a start. He is the leading money winner in this field, with $2.3 million in earnings. Trainer Bill Mott will try to win the Pegasus for the first time although he did win the Donn Handicap, which was replaced by this race, three times including twice with Cigar. Art Collector’s signature win was the 2021 Woodward (G1) over Maxfield. Win contender.

7. Skippylongstocking (5-1 – Exaggerator – Saffie Joseph Jr. / Jose Ortiz – 14: 4-1-3 - $777,810) Skippylongstocking returned to racing at Gulfstream where he had won twice before and responded with a convincing two-length victory in the Harlan’s Holiday after pressing the pace. That win gave Skippy his second Grade 3 victory to go with the West Virginia Derby in August. In three Grade 1 starts, he was ninth in the Pennsylvania Derby, third in the Belmont Stakes and fifth in the Preakness. Top choice.

8. Get Her Number (15-1 – Dialed In – Peter Miller / Luis Saez – 15: 5-2-1 - $700,661) Get Her Number was last seen running second in the Cigar Mile (G1) at Aqueduct when he had the lead in the stretch and was run down by the always determined Mind Control. Four of his victories were at sprint distances with his only two-turn win coming as a 2-year-old in the American Pharoah (G1) in 2020. Get Her Number did not hit the board in two starts at the Pegasus distance of nine furlongs. Toss.

9. Last Samurai (20-1 – Malibu Moon – D. Wayne Lukas / Frankie Dettori – 21: 4-4-4 - $1,101,039) The most recent victory for Last Samurai was in April of 2022 in the Oaklawn Handicap (G2). He was fourth in the Clark at Churchill and last month he was second in the Tinsel at Oaklawn falling a neck shy of the win after a late rally. Last Samurai is one of five horses in this field with more than $1 million in career earnings. Toss.

10. Cyberknife (5-2 – Gun Runner – Brad Cox / Florent Geroux – 12: 5-4-1 - $2,087,520) Cyberknife will make his first and only start as a 4-year-old in the Pegasus as he will head to stud duty after the race. His only start against older horses was in the Breeders’ Cup Dirt Mile when he lost a stretch battle to Cody’s Wish by a head after having the lead. Off since that November start, Cyberknife has been training at Fair Grounds for Brad Cox, who will try to win the Pegasus for the second time. Cyberknife won a pair of Grade 1s in the Arkansas Derby and the Haskell in 2022. Since the Monmouth Park victory, the son of Gun Runner had two seconds and a third at that elite level. The one to beat.

11. Stilleto Boy (30-1 – Shackleford – Ed Moger Jr. / Mike Smith – 19: 3-4-7 - $1,131,675) Stilleto Boy ships to the East Coast to run in the Pegasus for the second time, having finished third last year at 26-1 odds. This 5-year-old spent the rest of 2022 competing in top stakes races in California for the handicap division with mixed results. He won the Californian (G2) in April on the front end and had top-three finishes in a pair of Grade 2 races, including a second in the San Antonio last month behind Country Grammer. Live long shot.

12. O’Connor (10-1 – Boboman – Saffie Joseph Jr. / Javier Castellano – 20: 10-5-2 - $225,544) O’Connor came to the barn of Saffie Joseph Jr. last year from Chile, where he recorded nine of his 10 victories as a long-distance specialist. In his American debut in October, O’Connor won an allowance race at Gulfstream Park by six lengths. In the Harlan’s Holiday, which served as the local prep race for the Pegasus, he was fourth after he ran evenly behind a couple of the more favored horses in this field. Toss.

Summary: The 2023 Pegasus World Cup does not have a heavy favorite like Arrogate, Gun Runner, Knicks Go and Life Is Good, who ran to their odds and registered popular victories.

Cyberknife is the 5-2 morning line favorite in this year’s field of 12, and handicappers have to be thinking that maybe the winner could come with a record price. That would not mean that a long shot would be in the winner’s circle since Mucho Gusto had the highest Pegasus win payoff at $8.80 in 2020.

Pegasus 2023 is not easy to handicap. The pace scenario should be fair because some horses prefer to be part of the early pace and others use a late run. Some of the horses who are favored in the morning line are coming back from three- to four-month layoffs. Five of the horses earned at least $1 million in their careers.

You have to admire the determination Cyberknife showed in the Breeders’ Cup Dirt Mile, a race that produced Pegasus winners in the past.

Skippylongstocking looked strong winning the Harlan’s Holiday for Saffie Joseph and will be the top choice.