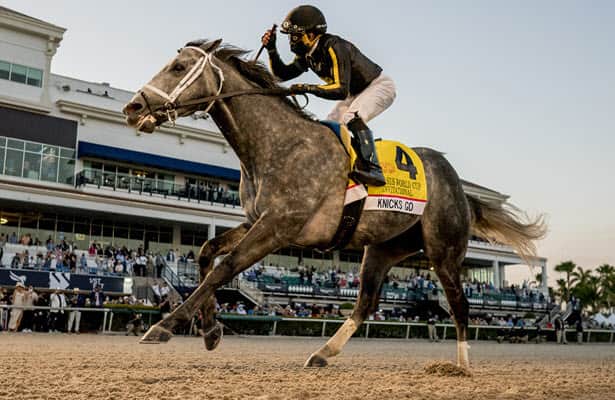 Now just 11 days until the field is drawn for the Grade 1, $3 million Pegasus World Cup at Gulfstream Park on Jan. 29, the prospective lineup is starting to take shape.

Last Sunday, Gulfstream Park sent out invitations to compete to 19 horses from coast-to-coast, led by last year's winner Knicks Go and Breeders’ Cup Dirt Mile hero Life Is Good. Both have long been confirmed as targeting the race. But as for the remaining 17 invitees, which includes seven also-eligibles, the connections for only three have committed.

Below is a look at the status of the 19 initial invitees for the Pegasus. Per the conditions of the race, Gulfstream Park will send out revised invitation lists both on Sunday and Jan. 23, two days before the race is drawn.

While Knicks Go and Life Is Good figure to tower over the field, the connections for the three long shots also listed are planning to run, Horse Racing Nation confirmed this week.

Sir Winston, the 2019 Belmont Stakes winner, will be back on dirt following a string of good efforts over the synthetic surface at Woodbine for Hall of Fame trainer Mark Casse. After a layoff of nearly a year, Sir Winston returned in late summer last year and was runner-up in both the Durham Cup (G3) and Autumn Stakes (G2) before winning the Valedictory (G3) most recently on Dec. 5.

Trainer Mike Maker said Endorsed would run “if he gets in.” Given the expected defections from the main body of the invited field, that seems likely. Endorsed has not won since May of 2020, a string of 15 starts. Most recently, he was second a close second to Pegasus invitee Officiating in the seven-furlong Mr. Prospector (G3) at Gulfstream Park.

Dallas Stewart, trainer of both Title Ready and Chess Chief, told Horse Racing Nation Wednesday that Title Ready would “maybe” run if he makes the field. Later on the Ron Flatter Racing Pod, he also left the door slightly ajar for Chess Chief, though it is unlikely.

The status of Eight Rings remains unclear for Bob Baffert, who has twice won the Pegasus (Mucho Gusto in 2020, Arrogate in 2017). The 5-year-old Empire Maker horse was fourth in the Breeders’ Cup Dirt Mile in November and most recently checked in third in both the Native Diver (G3) at Del Mar and the Dec. 26 San Antonio (G2) at Santa Anita.

Trainer Saffie Joseph Jr. said Officiating would not compete, “unless the owners want to run.”  Prior to winning the Mr. Prospector, the 4-year-old Blame colt owned and bred by Vegso Racing Stable won the Bear’s Den Stakes at Gulfstream and was never a factor when trying Gulfstream’s new Tapeta track in the Nov. 6 Showing Up Stakes.

Fearless, Dr Post and Happy Saver are all potential candidates for next month’s Saudi Cup and will not contest the Pegasus, their trainer Todd Pletcher told Horse Racing Nation this week. Rather than the Pegasus for any of those three, Pletcher previously indicated the $150,000 Fred W. Hooper (G3) going a mile on the undercard could instead be used as a potential prep for the Saudi Cup.

Neither Ginobili nor Express Train will make the cross-country trip from Southern California, their respective trainers told Horse Racing Nation this week. John Shirreffs said Express Train, winner of the Dec. 26 San Antonio (G2) at Santa Anita, would stay home and run in the $200,000 San Pasqual (G2) on Feb. 5 followed by the $650,000 Santa Anita Handicap (G1) on March 5 if all goes to plan.

Ginobili is working steadily at Santa Anita, but trainer Richard Baltas said he has not decided on what might be next for the Breeders’ Cup Dirt Mile runner-up.

Mandaloun and Midnight Bourbon are set to meet in the Jan. 22 Louisiana Stakes (G3) at Fair Grounds as a prep for the $20 million Saudi Cup. Concert Tour runs Saturday in the Fifth Season Stakes at Oaklawn Park in his first start since last year's Preakness.