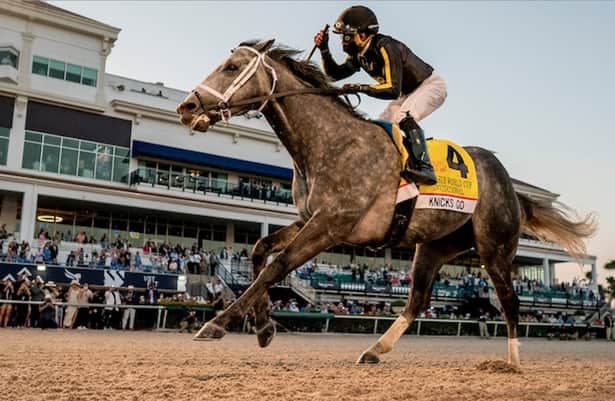 As expected, Knicks Go was made the morning-line favorite by track announcer Pete Aiello, getting odds of 6-5. Life Is Good was installed as the 7-5 second choice.

Asked about the inside draw for Knicks Go, trainer Brad Cox said, “Don’t mind it one bit.”

Making the final start of a career that has included five previous Grade 1 victories, Knicks Go will be out to defend the victory he scored last year, when jockey Joel Rosario coasted him to the wire 2 3/4 lengths ahead of Jesús’ Team and Independence Hall. Cox brings the 6-year-old Paynter horse to South Florida on a four-race winning streak, including the Breeders’ Cup Classic last fall.

About four hours before that race, Life Is Good won the Breeders’ Cup Dirt Mile, making him 2-for-2 in open company. If not for a neck loss to Jackie’s Warrior in the H. Allen Jerkens Memorial (G1) during the Saratoga summer, the 4-year-old colt by Into Mischief would be undefeated coming into his first time going as far as 1 1/8 miles. Trainer Todd Pletcher has called again on Irad Ortiz Jr., who has won in both his rides on Life Is Good.

Sir Winston, best known for his victory in the 2019 Belmont Stakes, is the only other Grade 1 winner in the field. He drew post 6 and was given odds of 12-1. The 6-year-old sired by Awesome Again most recently won the Valedictory (G3) going 1 1/2 miles for trainer Mark Casse on the synthetic track at Woodbine.

The 6-year-old horse Chess Chief, trained by Dallas Stewart and ridden by Reylu Gutierrez, was made the 10-1 third choice after winning last month in the Tenacious Stakes at Fair Grounds. He drew post 2.

Drawn into post 6 with odds of 12-1, Stilleto Boy is the only other Pegasus starter who has hit the board in a Grade 1 race. Although he was far behind the winners, the 4-year-old Shackleford gelding was second to Medina Spirit in the Awesome Again and third to Flightline in the Malibu, both last year at Santa Anita.

After a possibility of showers Wednesday, Thursday and Friday, the National Weather Service has predicted a mostly sunny Saturday for the Pegasus card with a high near 64 and a northwest wind of 17-20 mph with gusts to 23 mph. That would be a tailwind in the homestretch.