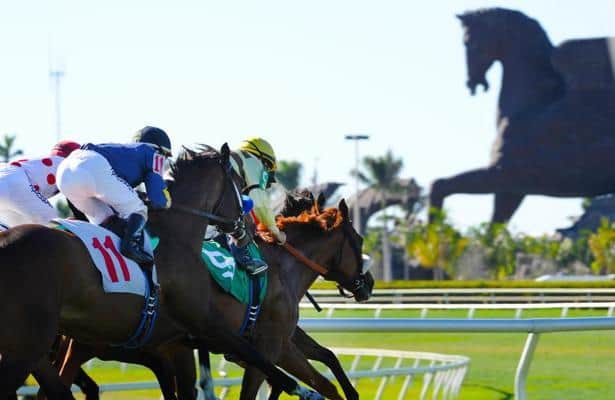 A field of nine was drawn for Saturday’s Grade 1, $3 million Pegasus World Cup Invitational and will feature the highly anticipated match-up between Knicks Go and Life Is Good.

In a process that began Jan. 9, Gulfstream Park had to revise their list of invitees a few times but ultimately Knicks Go and Life Is Good will provide what many experts describe as a meeting of the two best older male dirt horses in the country. On the heels of their victories in the Breeders’ Cup, Knicks Go was made the 6-5 morning line favorite with Life Is Good close behind at 7-5.

Here is a final analysis of the field for the Pegasus World Cup with the Gulfstream Park morning line odds.

1. Knicks Go (6-5 – Paynter – Brad Cox / Joel Rosario – 24: 10-3-1 - $8,673,135) Knicks Go won five Grade 1 races that include a pair of Breeders’ Cup races, the Whitney, last year’s Pegasus World Cup, and the Breeders’ Futurity. He is currently riding a four-race winning streak. Wins in the 2020 Breeders’ Cup Dirt Mile and the 2021 Pegasus made it clear that when Knicks Go gets to the lead going two-turns that he has been almost impossible to beat. The winner's of four of the first five Pegasus World Cup's prepped for the race with a victory in the Breeders’ Cup. Knicks Go did that before his 2021 Pegasus win and, of course, looks to do it again following his victory in the Breeders’ Cup Classic in November. If you are into workouts, Knicks Go fired a bullet at the Fair Grounds on Sunday with the best five-furlong breeze out of 58. The one to beat.

2. Chess Chief (10-1 – Into Mischief – Dallas Stewart / Reylu Gutierrez – 30: 5-4-4 - $810,338) Chess Chief won the Tenacious last month and the New Orleans (G2) at Fair Grounds. All five of his victories happened at that New Orleans track. He has never raced at Gulfstream where he will not be able to use Lasix which was present in his most recent wins. Chess Chief will have a fast pace to aid his late running style. Use underneath.

3. Stilleto Boy (20-1 – Shackleford – Ed Moger, Jr. / Kent Desormeaux – 12: 2-3-4 - $540,675) Stilleto Boy will ship to the east coast for the first time in his career. He won the Iowa Derby at Prairie Meadows with a front-running effort during the summer. The 4-year-old was second in the Awesome Again (G1) at Santa Anita behind Medina Spirit which prompted a fifth-place finish in the Breeders’ Cup Classic and then a third in the Malibu (G1) behind the speedy Flightline. He has run well on the lead and off the pace, but he will have to rally in this field. Use underneath.

4. Life Is Good (7-5 – Into Mischief – Todd Pletcher / Irad Ortiz, Jr.– 6: 5-1-0 - $1,059,200) After an almost six-length victory in the Breeders’ Cup Dirt Mile (G1), Todd Pletcher made it clear that the Pegasus World Cup would be the next race for Life Is Good. In the Dirt Mile, he went right to the front and extended his lead throughout using the same running style as Knicks Go. Life Is Good had a brief freshening at WinStar Farm after the Breeders’ Cup and has been preparing for the showdown with Knicks Go at Pletcher’s Florida training base at Palm Beach Downs. He will have to run the best race of his career to be able to beat the future Horse of the Year for 2021 in Knicks Go. Win Contender.

5. Empty Tomb (20-1 – Speightstown – Rob Falcone. Jr. / Paco Lopez – 24: 5-5-5 - $358,306) Empty Tomb was entered in the Jazil at Aqueduct last Saturday, but the connections opted to accept a late invitation to the Pegasus. He was claimed for $80,000 at Saratoga by trainer Rob Falcone, Jr. whose horses are running well at Aqueduct this winter. Since the claim, Empty Tomb ran in three listed stakes with a second in the December Queens County at the Big A. He finds a very tough spot because he does his best running as part of the early pace and will have to face classier and faster horses. Toss.

6. Sir Winston (12-1 – Awesome Again – Mark Casse / Edwin Gonzalez – 19: 6-4-1 - $1,189,873) Now a 6-year-old, Sir Winston became a graded stakes winner again when he took the 12-furlong Valedictory Stakes (G3) at Woodbine for the sixth victory of his career, which is highlighted by his classic triumph in the 2019 Belmont Stakes (G1). Following his win on Dec. 5, Sir Winston went south to continue his training at Palm Meadows in Florida for Mark Casse. Gulfstream Park will become the 10th different track at which he has raced. There will be plenty of early pace for this late runner. Lots of respect for the career that Sir Winston has put together, but the nine-furlongs might be too short and the pace may just be too fast. Top four finish possible.

7. Title Ready (20-1 – More Than Ready – Dallas Stewart / Tyler Gaffalione – 28: 5-6-5 - $673,480) This 7-year-old was a winner a year ago in the Louisiana Stakes (G3) which prompted a trip to Meydan for the Dubai World Cup where he did very little running. As often happens, those trips to the Middle East caused a long layoff. Title Ready returned to race after six months and ran twice with a third in an allowance and a sixth in a stake at Oaklawn Park. Toss.

9. Commandeer (30-1 – Street Boss – James Toner / Julien Leparoux – 10: 3-2-2 - $142,114) Last year as a 3-year-old Commandeer faced older horses only once in an allowance which he won at Laurel Park in October. He won another allowance in November at Churchill Downs on a sloppy track. The now 4-year-old will make his 2022 debut while racing in the first stakes race of his career at a new racetrack. It sounds like a lot to ask of this gelding. Toss.

Normally when a race is loaded with early speed, handicappers will look for the winner to come running from off the pace. Knicks Go and Life is Good seem destined to battle on the lead and put up fast Grade 1 fractions. They have plenty of speed but also have plenty of talent and class.

The late runners in the field, led by Chess Chief and Sir Winston, appear to be getting an ideal set-up but can handicappers expect both Knicks Go and Life Is Good to come up empty down the stretch? The closers will have to worry about getting too far behind and having too much ground to make up. Usually when late-runners are asked to stay close to the lead early in a race, they come up empty down the stretch.

Bottom line is that Knicks Go and Life Is Good are just much better than the rest of the field. Frankly, I will be rooting for Life Is Good, but Knicks Go is the most likely winner because he is the best horse in training right now.