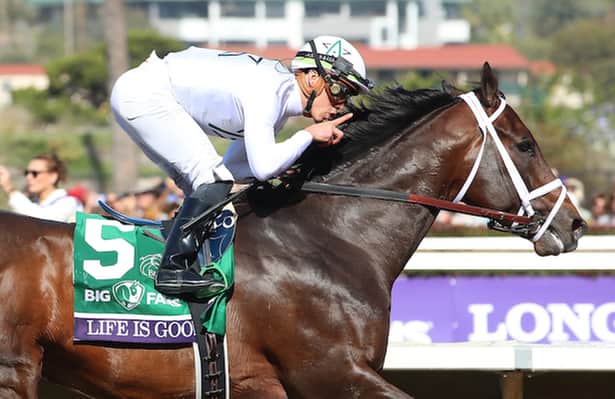 Knicks Go headlines the list of 19 horses that were invited to the $3 million, Grade 1 Pegasus World Cup Invitational, which will be run at Gulfstream Park on Jan. 29. Knicks Go will seek the sixth Grade 1 victory of his career as he tries to become the first horse to win the Pegasus World Cup twice.

The list of 19 possible horses for the Pegasus was divided, with 12 listed in the main body of the race and seven as “also eligibles.”

Breeders’ Cup Dirt Mile (G1) winner Life Is Good leads four horses from the barn of Todd Pletcher who were invited to the Pegasus, along with Dr Post, Fearless and Happy Saver.

Trainer Brad Cox had three horses among the invitees with Concert Tour, Knicks Go, and Mandaloun. In a recent interview with Horse Racing Nation, Cox indicated that Mandaloun would make his next start on Jan. 22 at Fair Grounds in the Louisiana Stakes. And Concert Tour was entered in the Fifth Season at Oaklawn Park on Saturday.

Eight of the 12 invitees in the main body of the race have at least a single Grade 1 victory in their past performances, and six of them have earned more than $1 million in their careers. Knicks Go leads the field in both of those categories, with five Grade 1 victories and earnings of more than $8.6 million.

Here is a projected look at the field for the Pegasus World Cup with possible morning-line odds from Horse Racing Nation. The horses are listed in alphabetical order with odds, sire, trainer, most recent jockey and career record:

Dr Post (20-1 – Quality Road – Todd Pletcher / Irad Ortiz, Jr. – 12: 4-1-3 - $887,802) The now 5-year-old son of Quality Road won a pair of Grade 3 races last year, including the Monmouth Cup at Monmouth Park in July and the Westchester at Belmont Park in May. Grade 3 is the best level of success for Dr Post, who fell short when he stepped to Grade 1 competition in 2021 although he did run third in the Woodward and the Pacific Classic. Pletcher is considering the one-mile Fred Hooper (G3) on the Pegasus undercard for Dr Post. Use underneath.

Eight Rings (20-1 – Empire Maker – Bob Baffert / John Velazquez – 13: 3-1-2 - $450,451) You have to go back to 2019 to find Eight Rings' only stakes win, which came in the American Pharoah (G1) in his third start. Since then, the Bob Baffert runner finished in the top three in graded stakes five times. His only win last year was in an allowance at Santa Anita before his fourth-place finish in the Breeders’ Cup Dirt Mile. Most recently, Eight Rings was third in the San Antonio (G2) behind Express Train and Hot Rod Charlie. Not sure why we should expect a better result in this kind of field. Toss.

Express Train (15-1 – Union Rags – John Shirreffs / Victor Espinoza – 15: 5-4-3 - $815,800) The recent upset victory in the San Antonio (G2) over Hot Rod Charlie at odds of 7-1 was the finest in his career. Last year, Express Train also won the San Diego (G2) and the San Pasqual (G2). His best finishes in Grade 1 company were seconds in the Santa Anita Handicap and the Malibu. In 15 career starts, there is only one outside of California and that resulted in a third in the Oaklawn Handicap (G2). As his career stats show, Express Train rarely runs a bad race. Use underneath.

Flightline (7-2 – Tapit – John Sadler / Flavien Prat – 3: 3-0-0 - $259,800) With brilliant victories in his three career starts, Flightline became a Grade 1 winner when he blitzed the field in the Malibu. We all know about the best speed figures of 2021 that he ran and the combined winning margins of 37 1/2 lengths. But trainer John Sadler said after the Malibu that his next start is likely to be in March or April as they look to send Flightline around two turns. You can’t blame Gulfstream Park for inviting the much-discussed son of Tapit to the Pegasus because the presence of his speed in the field would make the race sensational. Unlikely to run.

Ginobili (30-1 – Munnings – Richard Baltas / Drayden Van Dyke – 15: 3-2-1 - $457,325) At Del Mar this summer, Ginobili stepped up from an allowance win to get his only stakes win in the Pat O’Brien (G2). In the Breeders’ Cup Dirt Mile, he was second to Life Is Good and that was commendable. When he shipped east for the Cigar Mile (G1), Ginobili pressed the pace but then faded to finish sixth. As a horse that does his best when pressing the pace, he will have a tough time keeping up with the likes of Knicks Go and Life Is Good. Unlikely to run.

Happy Saver (15-1 – Super Saver – Todd Pletcher / Tyler Gaffalione – 8: 5-2-1 - $705,300) Happy Saver won the first five races of his career, including the 2020 Jockey Club Gold Cup (G1) as a 3-year-old. Trainer Todd Pletcher picked spots for this son of Super Saver very carefully. Happy Saver ran second in his most recent starts in a pair of Grade 1s behind Maxfield and Max Player. The lack of workouts since the Clark in November makes it unlikely that he will be ready to run in the Pegasus in less than three weeks. Pletcher mentioned the Saudi Cup as another possibility. Not in full training.

Knicks Go (2-1 – Paynter – Brad Cox / Joel Rosario – 24: 10-3-1 - $8,673,135) Knicks Go won five Grade 1 races: a pair of Breeders’ Cup races, the Whitney, last year’s Pegasus World Cup and the Breeders’ Futurity. He is riding a four-race winning streak. Wins in the 2020 Breeders’ Cup Dirt Mile and the 2021 Pegasus made it clear that when Knicks Go gets to the lead going two turns he was almost impossible to beat. To his credit, Knicks Go was able to get a comfortable lead and then carry his speed to impressive victories during his string of wins. But Life Is Good will be expected to make things uncomfortable for Knicks Go on the lead. The one to beat.

Life Is Good (5-2 – Into Mischief – Todd Pletcher / Irad Ortiz, Jr.– 6: 5-1-0 - $1,059,200) After an almost six-length victory in the Breeders’ Cup Dirt Mile, Todd Pletcher made it clear that the Pegasus would be the next race for Life Is Good. In the Dirt Mile, he went right to the front and extended his lead throughout the race, using the same running style as Knicks Go. Life Is Good had a brief freshening at WinStar Farm after the Breeders’ Cup and has been preparing for the showdown with Knicks Go at Pletcher’s Florida training base at Palm Beach Downs. Top choice.

Mandaloun (10-1 – Into Mischief – Florent Geroux / Brad Cox – 8: 5-1-1 - $1,651,252) Mandaloun became an official Grade 1 winner in the Haskell Stakes back in July when he raced most recently. He finished second in the Kentucky Derby (G1) and with the results still pending he still could become the winner of the Run for the Roses. He has been training at Churchill Downs and Fair Grounds to prepare for his 4-year-old debut, which Brad Cox recently told HRN would be in the Louisiana Stakes at the New Orleans track. It makes sense that he would avoid his stablemate Knicks Go in the Pegasus. Unlikely to run.

Midnight Bourbon (15-1 – Tiznow – Steve Asmussen / Joel Rosario – 13: 2-5-4 - $1,167,970) The past performances of Midnight Bourbon are short on victories but are loaded with top three finishes in Grade 1 races such as the Clark, Pennsylvania Derby, Travers and Preakness. That made Midnight Bourbon a millionaire. His only stakes victory was in the Lecomte (G3) on the 2021 Kentucky Derby trail. Trainer Steve Asmussen, who won the Pegasus in 2018 with Gun Runner, has Midnight Bourbon in serious training at Fair Grounds. Asmussen is considering running him in the Louisiana Stakes against Mandaloun. Unlikely to run.

Sir Winston (30-1 – Awesome Again – Mark Casse / Patrick Husbands – 19: 6-4-1 - $1,189,873) Now a 6-year-old, Sir Winston became a graded-stakes winner again when he took the 12-furlong Valedictory Stakes (G3) at Woodbine for the sixth victory of his career, which is highlighted by his classic triumph in the 2019 Belmont Stakes (G1). After his win on Dec. 5, Sir Winston went south to continue his training at Palm Meadows in Florida for Mark Casse. If he runs in the Pegasus, Gulfstream would become the 10th track at which he has raced. Lots of respect for the career that Sir Winston has put together, but the nine furlongs might be too short. Toss.

Super Stock (30-1 – Dialed In – Steve Asmussen / Luis Contreras – 15: 4-3-3 - $1,181,677) Super Stock made nine starts in 2021, which began on the Kentucky Derby trail, included a victory in the Arkansas Derby (G1), a 16th-place finish in the Run for the Roses, and two more listed stakes wins. Super Stock is part of Steve Asmussen’s barn at Oaklawn Park, where he is training after running second there in the Poinsettia. In the Pegasus, Super Stock would face older horses in a non-age restricted race for the first time. Toss.

Summary: Four of the five winners of the Pegasus World Cup - Arrogate, Gun Runner, City of Light and Knicks Go - prepped for the race with a victory in the prior Breeders’ Cup Championships.

In this year’s field, Knicks Go and Life Is Good could continue that trend. Of course, Knicks Go will try to do it again in 2022, but this time after his victory in the 2021 Breeders’ Cup Classic. Life Is Good was the winner of the Dirt Mile at the World Championships.

That trend only reinforces the notion that this year’s Pegasus World Cup looks like a battle between Knicks Go and Life Is Good. It is hard to find a way to separate the two of them with the similarity in running styles and the success on the track. Knicks Go has an extensive record, but Life Is Good has youth on his side.

Life Is Good might be a better price at the windows, so I will make him my top choice.