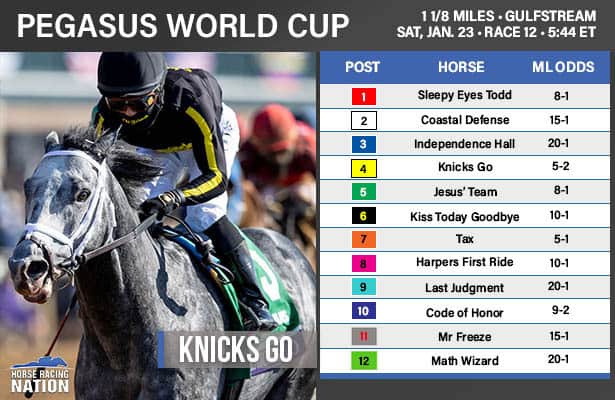 In the first three runnings of the Grade 1 Pegasus World Cup, it was easy to pick the winner because they all had a victory in a Breeders’ Cup race. Arrogate, Gun Runner and City of Light also had won other Grade 1 stakes in their careers heading into the rich race at Gulfstream Park.

Last year, Mucho Gusto went against that trend since he never ran in the Breeders’ Cup and did not have a Grade 1 win to his credit, although he was second in the Haskell and third in the Travers.

Knicks Go will be the favorite in the $3 million Pegasus on Saturday based on his front-running 3 1/2-length win in the Breeders’ Cup Dirt Mile. The field of 12 contains only two other horses with Grade 1 victories — Code of Honor and Math Wizard.

Here is a look at the field for the Pegasus with the official track morning line odds. It is listed as race 12 with post time of 5:44 pm ET.

1) Sleepy Eyes Todd (8-1 – Paddy O’ Prado – Miguel Angel Silva / Jose Ortiz – 15: 8-2-0 - $744,825) With four wins in his last six starts, including the Mr. Prospector (G3) at Gulfstream and the Charles Town Classic (G2), this 5-year-old is in the best form of his career. Trainer Miguel Angel Silva said his versatile runner will sit off the pace and not challenge Knicks Go on the front end. He has the feel of a horse that is going to get more than his share of attention at the betting windows. Between victories, Sleepy Eyes Todd ran a distant fifth in the Awesome Again (G1) at Santa Anita in September. Use in exotics.

2) Coastal Defense (15-1 – Curlin – Dale Romans / Corey Lanerie – 9: 2-2-0 - $156,266) Class is a significant issue for this 5-year-old who did not begin his career until 11 months ago. He needed four tries to break his maiden and eventually became an allowance winner at Churchill Downs in September. Even with two fourth-place finishes in a graded stakes races, he is over-matched. Toss.

3) Independence Hall (20-1 – Constitution – Michael McCarthy / Flavien Prat – 7: 4-1-0 - $315,600) He became a Grade 3 winner in his second career start as a 2-year-old. On the 2020 Kentucky Derby trail, he began with a win in the Jerome but could not keep up when the fields got tougher in Florida. A trainer change sent him to Michael McCarthy, the winner of the 2019 Pegasus with City of Light. In California, he won an allowance but then could not contend with the step-up in class in the Malibu (G1). Toss.

4) Knicks Go (5-2 – Paynter – Brad Cox / Joel Rosario – 17: 5-3-1 - $1,348,528) Knicks Go will go to post as the favorite with three wins a row since going to the barn of trainer Brad Cox. He will look to become the fourth winner of a Breeders’ Cup race to make his next start a victory in the Pegasus. He has a significant pace advantage for his early speed with no other horse that appears likely to challenge him early in the race. With class and pace advantages, Knicks Go is the one to beat. The favorite.

5) Jesus’ Team (8-1 – Tapiture – Jose Francisco D’Angelo / Irad Ortiz Jr. – 13: 3-4-3 - $518,540) This guy hit the board in three Grade 1 and 2 races last year with a string of noteworthy performances in the Haskell, Jim Dandy, Preakness and Breeders’ Cup Dirt Mile. He finally got a stakes win in the restricted Claiming Crown Jewel at Gulfstream last month. Handicappers will have to decide whether that win and a preference for Gulfstream make him a win contender or a horse to definitely use in the exotics. Use underneath.

6) Kiss Today Goodbye (10-1 – Cairo Prince – J. Eric Kruljac / Mike Smith – 11: 3-0-3 - $230,802) Before his victory in the San Antonio (G2) at Santa Anita on the day after Christmas, this 4-year-old had not won above the allowance level. His late-running score over a field that included last year’s Pegasus winner was an eye-opener. With two wins in a row he became a horse that will come with good odds and is worth using in your wagers. Worth your consideration.

7) Tax (5-1 – Arch – Danny Gargan / Luis Saez – 13: 4-3-1 - $957,060) Tax returned from a seven-month layoff to win the Harlans Holiday (G3) at Gulfstream Park at odds of 2-1 by more than four lengths. He easily handled the field of seven in the local prep race for the Pegasus. Tax had big wins in his career in races such as the Jim Dandy (G2) and the Withers (G3) but has yet to put two victories together. His best effort makes him dangerous. Win contender.

8) Harpers First Ride (10-1 – Paynter – Claudio Gonzalez / Angel Cruz – 17: 10-2-1 - $573,055) The winner of four of his five most recent starts and 10 out of 17 in his career faces a serious class challenge. Most of his victories came at his home track of Laurel Park. His most significant win was in the Pimlico Special (G3) on the Preakness undercard in October. You have to respect what this Maryland-bred has accomplished. He is an unlikely win candidate but certainly is worth using underneath in the exotics. Possible board hitter.

9) Last Judgment (20-1 – Congrats – Mike Maker / Paco Lopez – 14: 6-0-1 - $273,365) The last addition to the Pegasus field won the Sunshine Classic Stakes at Gulfstream Park last Saturday on the front end and comes right back to the races for Mike Maker. In his prior race, he was eighth in the Mr. Prospector (G3), which was won by Sleepy Eyes Todd. Toss.

10) Code of Honor (9-2 – Noble Mission – Shug McGaughey / Tyler Gaffalione – 15: 6-4-2 - $2,644,320) Code of Honor is one of three Grade 1 winners in the Pegasus field. His past performances show only two races that were not graded stakes. Race in and race out, this 5-year-old has run against better competition than any other horse in the field. Yes, 2020 was a disappointment in terms of finding the winner’s circle, but if you believe that class is a significant handicapping factor then Code of Honor must be taken seriously. Hall of Fame trainer Shug McGaughey says that his horse will appreciate the harder Gulfstream Park surface. Top choice.

11) Mr Freeze (15-1 – To Honor and Serve – Dale Romans / John Velazquez – 18: 6-4-1 - $1,595,600) It is hard to know what to expect from this 6-year-old. At his best, he is the winner of four graded stakes, including the Fayette (G2) at Keeneland in October and the Gulfstream Park Mile (G2) in February. However, when he faces Grade 1 competition, he has frequently been a disappointment. To his credit he did finish second in last year’s Pegasus after setting the pace. Possible board hitter.

Summary: This final analysis of the 2021 Pegasus World Cup is focusing on class, and clearly Knicks Go and Code of Honor have an advantage in that regard.

I am going to try to beat the likely favorite Knicks Go. Missing from his past performances are any starts at Gulfstream Park and more significantly he has never raced the nine-furlong distance. Trainer Brad Cox had a tough last weekend when his favorites were both beaten in the big 3-year-old races at the Fair Grounds. In 2021, through Jan. 19, Cox is winning at 19 percent, which is good for most trainers but low for him.  I understand that Knicks Go has a pace advantage, but winning streaks don’t last very long in today’s world of Thoroughbred racing.

Code of Honor has faced the toughest competition throughout his career and that gives him an edge in this field. He’ll need to get back to his best efforts of 2019, but McGaughey has been pointing to this race since he was second in the Clark (G1) in November. Code of Honor is the pick to win.