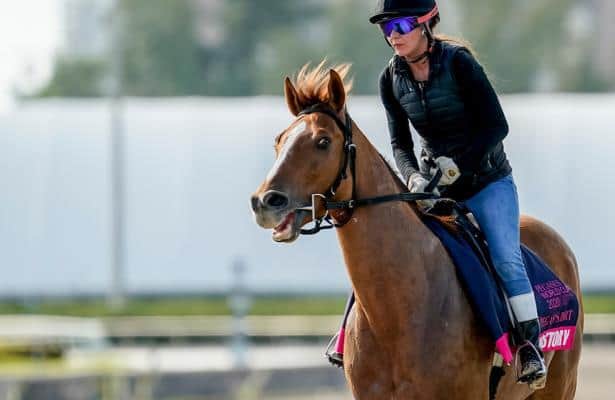 Pegasus World Cup day has arrived, and Gulfstream Park's signature race -- a Grade 1, $3 million event -- is a much different sort than originally expected.

Gone are heavy-headed stars Omaha Beach and Spun to Run, scratched within hours of one another on Thursday due to physical setbacks. Left is a group of 10 and, arguably, a more interesting betting race, especially if you didn't see a way to beat the beat favorites at draw time.

Keep in mind, of course, that all horses will run free of race day medication, including Lasix -- some of them for the first time. The decision drew mixed reaction, including from Dale Romans, who trains a horse in the Pegasus but said this is "too small of a study" to make a difference.

TimeformUS' Pace Projector expects the Dale Romans-trained longshot Mr Freeze on the lead. However, in reality Bodexpress, from the far outside post, is likely to be gunning it out front. He set the fractions last time in the local Harlan's Holiday (G3) and has little choice but to go early again given a short run up to to the first turn. It's either establish position, or get caught way wide.

Diamond Oops, who's 5-for-6 locally and stretching out from a last out victory sprinting in Gulfstream's Mr. Prospector (G3), may also press the pace, and many are touting him as one to watch on the stretch out. As for the new group of main contenders -- Higher Power, Mucho Gusto and Tax -- they figure to chase, but not too far behind.

Overall, everyone can be in a bit less of a hurry without Spun to Run on the early lead. The Breeders' Cup Dirt Mile hero is the type of horse who might not have come back to the rest of the field if allowed on the front end.

The Pegasus World Cup on TV

NBC will broadcast both the turf and dirt races during a 4:30-6 p.m. ET TV window. There, Larry Collmus will be on the call for both races. Meanwhile, TVG will offer full-card, on-site coverage featuring Gulfstream announcer Pete Aiello. Those with a free TVG account can also live stream races from every track, every day.

• How to bet the Pegasus Turf

Twelve races have been carded, with nine of them stakes. First post is 11:30 a.m. ET. Check out Gulfstream Park entries and odds for every race, and get a closer look at the stakes below...