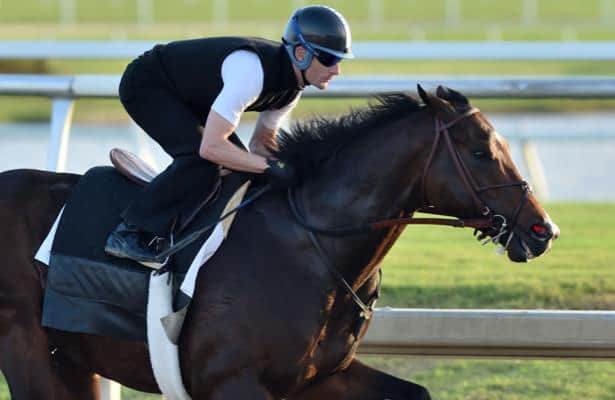 A full field of 12 has lined up for Gulfstream Park’s Grade 1, $3 million Pegasus World Cup, which will serve as heavy favorite Omaha Beach’s career finale before heading off to stud in Kentucky.

Post positions were drawn Wednesday for the Saturday event, which runs under different conditions than past renewals. Connections no longer stake a six-figure entry fee — hence the smaller purse — and contenders will run free of race day medication, including Lasix.

NBC will broadcast the Pegasus World Cup won in the past by Arrogate (2017), Gun Runner (2018) and City of Light (2019). Here’s a look at the field with morning line odds, trainers and jockey assignments.

2. Tax, 12-1 (Danny Gargan/Jose Ortiz): This gelding ran a sneaky-good second in Aqueduct’s Discovery Stakes (G3) on Nov. 30 to position him for the Pegasus. He beat some of the best in his class in the Jim Dandy (G2) last summer and seems to almost always hang around for a piece.

3. Diamond Oops, 20-1 (Patrick Biancone/Julien Leparoux): No doubt this gelding loves Gulfstream Park with a 5-for-6 record locally, but what about the distance? We don’t have a true gauge, as Diamond Oops stumbled at the break of his prior two-turn dirt try in the Breeders’ Cup Dirt Mile.

4. Seeking the Soul, 30-1 (Dallas Stewart/John Velazquez): He won one of eight starts in 2019, that being the Stephen Foster (G2) over his favorite track at Churchill Downs. The form that got him a second in this race a year ago may be in the rearview mirror for the 7-year-old, who’s looked a step slower lately.

5. Omaha Beach, 7-5 (Richard Mandella/Mike Smith): The heavy favorite here has had just one hiccup on his way to the Pegasus, that being a foot bruise that shifted his work schedule but now seems behind the newly turned 4-year-old. Here, he’ll have to stretch back to 1 1/8 miles for the first time since April.

6. Higher Power, 6-1 (John Sadler/Flavien Prat): Since breaking out for new connections in the Pacific Classic (G1), he earned a pair of thirds in Grade 1 company out west, but only after stumbling at the start in the Awesome Again and breaking slow in the Breeders' Cup Classic. If Higher Power can get away cleanly and repeat that Del Mar effort, he holds an upset chance.

7. War Story, 30-1 (Elizabeth Dobles/Joel Rosario): Just when you think this guy’s done, he delivers a winning performance in the Harlan’s Holiday (G3) and is on to the Pegasus — for a third time — in a new barn. The 8-year-old no longer looks like a plodder, but rather a mid-pack runner who could get an earlier run on to the board.

8. Mr Freeze, 30-1 (Dale Romans/Luis Saez): The dominant winner of the 2018 West Virginia Derby (G3) hasn’t duplicated that effort, but there have been flickers, namely a victory in the 2019 Ack Ack (G3) at Churchill Downs. The thinking here is we haven’t seen his best lately. But can Mr Freeze get back to it?

10. Mucho Gusto, 9-2 (Bob Baffert/Irad Ortiz Jr.): He tailed off when fourth in the Oklahoma Derby (G3) last September but earned a pair of Grade 1 placings previously in the Haskell (G1) and Travers (G1). Better with maturity, Mucho Gusto learned to relax near the pace later in the season. Baffert usually brings them ready to run off the layoff.

11. Tenfold, 30-1 (Steve Asmussen/Tyler Gaffalione): This horse jumps up once in a while to deliver big efforts, such as his wins in the 2018 Jim Dandy (G2) and 2019 Pimlico Special (G3). But we’re past eight months since he’s hit the board. Works haven’t been especially sharp for this spot, either.

12. Bodexpress, 30-1 (Gustavo Delgado/Emisael Jaramillo): Despite moving through conditions with two post-Preakness Stakes victories, antics at the gate may have cost him again in the local Pegasus prep, the Harlan’s Holiday (G3). Surely, though, we haven’t seen his best, if at least he can get the mental side of the game down. He has speed, and he'll need it on a short run to the first turn.

Analysis: It’s tough to win big while playing with the general public, but is there really a scenario where Omaha Beach shouldn’t be keyed up and down your tickets?

You may have to find a way to cash using him with a pair I figure will go overlooked, Higher Power and Tax. Both enter with high ceilings and plenty of time between starts.

Meanwhile, Spun to Run hasn’t stopped in nearly a year — we’ve likely already seen his best — while Mucho Gusto, who also figures to take money, has a bigger prize in mind in the Feb. 29 Saudi Cup.

Mr Freeze deserves attention at a price, as other recent results have flattered him. He may not be an exacta player, but if you’re playing the trifecta and superfecta, think of him to round out those wagers.