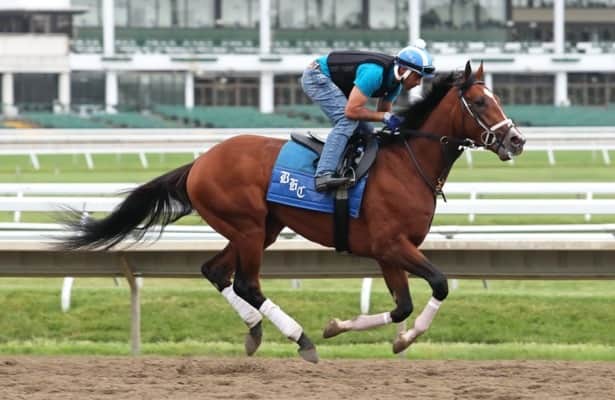 The colt who appears likely to be named the official 2021 Kentucky Derby winner returns to the races Sunday afternoon.

Mandaloun headlines a five-horse field going 1 1/16 miles in the $150,000 Pegasus Stakes at Monmouth Park. Post time is 4:50 p.m. EDT, with TVG to broadcast the local prep for next month’s Grade 1, $1 million Haskell Stakes.

When Mandaloun last raced, the Into Mischief colt finished a half-length shy of first-place Medina Spirit on May 1 in the Kentucky Derby. The Brad Cox trainee went off that day as a 27-1 long shot but outran 17 of his 18 rivals, including favored stablemate and eventual Belmont Stakes hero Essential Quality.

In the weeks since Mandaloun crossed second at Churchill Downs, the race’s order of finish has come under scrutiny.

Two post-race samples revealed Medina Spirit competed with an anti-inflammatory substance in his system that is banned on race days in Kentucky. Should the Kentucky Horse Racing Commission disqualify Medina Spirit, Mandaloun would be promoted to the race victory.

“No one would want to win a race that way,” Cox said last weekend, “but we’ll just accept the result.”

While racing fans await a KHRC decision, they will get to see Mandaloun back in action Sunday under jockey Florent Geroux. The Juddmonte homebred, winner of Fair Grounds’ Risen Star Stakes (G2) in February, is 3-5 morning-line favorite for the Pegasus Stakes.

Trainer Todd Pletcher has the lightly raced Dr Jack (5-1), who improved to 2-for-2 when taking an allowance race last month at Pimlico. Pletcher won the 2019 Pegasus Stakes with King for a Day, who upset eventual 3-year-old male champion Maximum Security.

Here is a look at the 2021 Pegasus Stakes field (trainer and jockey in parentheses) with morning-line odds:

TimeformUS’ pace projections show long shot Lugamo going out to a lead under jockey Angel Cruz, followed by Weyburn. Geroux is expected to have Mandaloun sitting in the middle of the five-horse field early on.

Reinier Macatangay asks the question of who can beat Mandaloun in the Pegasus. Macatangay also takes an in-depth look at Mandaloun’s performances to see how good the Derby runner-up is.

Trainer Brad Cox explained to Monmouth Park’s communications team why Mandaloun will start Sunday in the Pegasus. “This was the race we thought made the most sense on the calendar," Cox said.

This week on HorseCenter, hosts Matt Shifman and Brian Zipse preview the Pegasus while looking back at last weekend’s Belmont Stakes card. The duo highlights performances from Essential Quality, Hot Rod Charlie and other standouts.

New Jersey’s controversial new crop restrictions have been the story of the 2021 Monmouth Park meet. Veteran rider Jose Ferrer told Victor Ryan how he is adjusting to the rules.

Kentucky Derby runner-up Mandaloun will face four other 3-year-olds, including two graded stakes winners, when he marks his return to racing in Sunday’s $150,000 Pegasus Stakes at Monmouth Park.

Unraced since the May 1 Kentucky Derby, Mandaloun drew post position 2 for the 40th edition of the mile-and-a-sixteenth Pegasus Stakes. Trained by Brad Cox, the son of Into Mischief will be ridden by Florent Geroux in the race that headlines the Sunday card. First race post time is 12:15 p.m. EDT.

Cox is using the Pegasus Stakes as a tune-up for Mandaloun for the $1 million Haskell Stakes (G1) on July 17 at Monmouth.

Brooklyn Strong, who won the Remsen (G2) and was fifth in the Wood Memorial (G2), drew post 1 for trainer Danny Velazquez. Abner Adorno has the mount.

Weyburn, winner of the Gotham Stakes (G3) at odds of 46-1 and then fourth in the Wood Memorial, has post position 4 for trainer James Jerkens. Dr Jack, unbeaten in two lifetime starts for trainer Todd Pletcher, and Lugamo, unraced since a 12th-place finish March 27 in the UAE Derby (G2), round out the field.