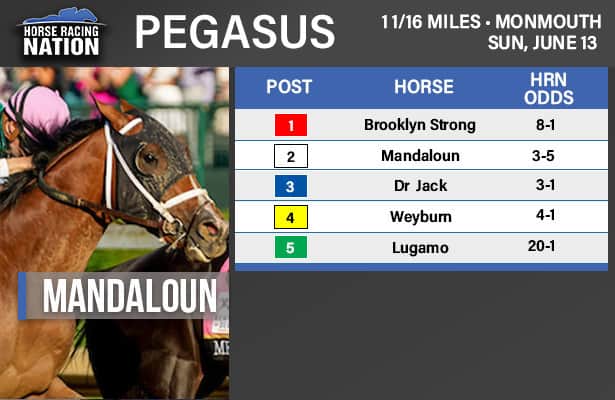 The $150,000 Pegasus Stakes, which will be run on Sunday at a distance of 1 1/16 miles, serves as the local prep race for the Haskell Stakes (G1). The winner of the Pegasus, which this year features Kentucky Derby runner-up Mandaloun, gets a free entry and all starting fees paid for Monmouth Park’s signature race on July 17.

The Pegasus was originated at the Meadowlands Racetrack and was first run in 1981. The race was permanently moved to the Jersey Shore track in 2010.

Here is a full field analysis for the Pegasus Stakes, which is scheduled as race 10 with post time at 4:50 pm ET. Morning line odds were set by the Horse Racing Nation staff.

1) Brooklyn Strong (8-1 – Wicked Strong – Daniel Velazquez / Abner Adano – 6: 3-0-1 - $225,000) It has been a tale of two very different years for Brooklyn Strong. As a juvenile, everything went well – a victorious debut, a win in a NY-bred stake, and then a Grade 2 score in the Remsen at Aqueduct on the Derby trail. However, as a 3-year-old, nothing has worked out as planned. Setbacks caused Brooklyn Strong to have to make his first start of the year in the Wood Memorial and he finished fifth. He still had enough points to run in the Kentucky Derby which was just too much to ask after he got jostled around at the start. Like others in here, he has questions to answer. Use underneath.

2) Mandaloun (3-5 – Into Mischief – Brad Cox / Florent Geroux – 6: 3-1-1 - $961,152) The second-place finisher in the Kentucky Derby (G1) may soon be awarded first-place if, as anticipated, Medina Spirit is disqualified. At the wire, Mandaloun was behind only a half-length. Either way, this Brad Cox runner has been training in Kentucky for his return to the track. He has not run since the first Saturday in May, to allow his stablemate Essential Quality to have the spotlight in the Belmont Stakes (G1).

Mandaloun is the winner of 3 out of 6 career races with earnings just under $1 million. His stalking style is ideal for Monmouth Park. “He is usually forwardly placed,” said Cox. “Any time you have speed like he does it’s a big advantage. I’m not saying he is going to be on the lead in this race but he will be near the lead I’m sure. Any time you have his running style it normally puts you in a good position.” Top choice.

3) Dr Jack (3-1 – Pioneerof the Nile – Todd Pletcher / Paco Lopez – 2: 2-0-0 - $53,640) Dr Jack is unbeaten in two starts in his career that began in April at Gulfstream sprinting and then continued at Pimlico with a three-length victory going two turns last month. He figures to be a late developing long-distance runner with Pioneerof the Nile and an A.P. Indy mare as his parents. He has already overachieved in the sense that he was sold for just $25,000 as a 2-year-old. Use underneath.

4) Weyburn (4-1 – Pioneerof the Nile – James Jerkens / Dylan Davis – 5: 2-1-0 - $277,520) Weyburn is unraced since the Wood Memorial (G2) in April when he pressed the pace and was fourth after getting out-finished down the stretch by three horses, each of which did not fare particularly well in the Triple Crown races. For Weyburn, there were minor setbacks that kept him from racing for the past three months. He had three weekly workouts in May. The Jimmy Jerkens runner is a pace-presser which will work at the Jersey Shore track. This field is small but strong, so it will be a challenging spot for a return from a layoff. Use underneath.

5) Lugamo (20-1 – Chitu – Antonio Sano / Angel Cruz – 5: 2-1-1 - $65,140) As a 2-year-old, Lugamo raced in Maryland for trainer Rodolfo Sanchez-Salomon where he broke his maiden and won an allowance at Laurel Park before running third in the JF Lewis Stakes. This year, he is in the barn of Antonio Sano, the trainer of Gunnevera, who won more than $5.5 million. Lugamo was ambitiously sent to Meydan for the UAE Derby (G2) where he finished 12th in a field of 14. He’s been training for his return at Sano’s Gulfstream Park base. Sano is a crafty trainer, making this one worth a look at a price. Live longshot.

Summary: Mandaloun is the horse to beat in the Pegasus on Sunday. Trainer Brad Cox said that he didn’t want to have 11 weeks off heading into the Haskell, so the Pegasus is the ideal spot to get ready for the $1 million race.

Cox may not have Mandaloun at 100 percent for this race, but three of the other four horses are also coming off long layoffs. Weyburn has not run since the Wood Memorial on April 3, Lugamo ran on March 27 in the UAE Derby, and for Brooklyn Strong it was the Kentucky Derby.

Dr Jack is in fine form with his two victories since April and he could be the biggest threat to Mandaloun.

Letruska as the horse of the year? It could happen
It us something more out of a Hollywood script tha...