Knicks Go 'full of himself' as he settles in for Pegasus 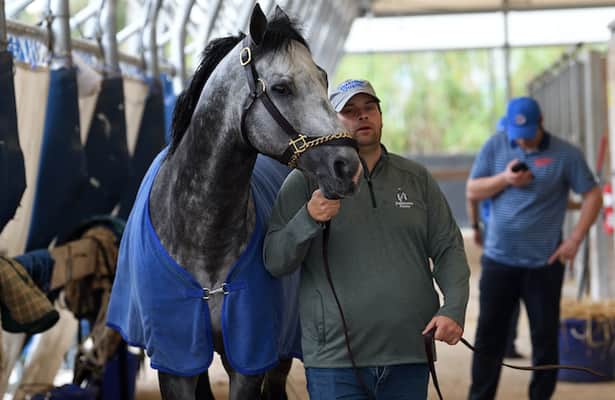 Knicks Go was "full of himself" on his first morning at Gulfstream Park Tuesday since shipping from New Orleans for a title defense in Saturday’s Grade 1, $3 million Pegasus World Cup Invitational.

The Brad Cox-trained 6-year-old, widely expected to be named Horse of the Year next month, will make the final start of his career in the Pegasus World Cup, which he won last year by a dominating 2 3/4 lengths, before starting a second career as a stallion.

“He shipped in here, arrived last night about 11:30. He settled in fine last night. His temp was good. He looked good this morning walking a little bit. His energy level was really good and we decided to train him,” Cox said. “We just jogged him about a mile and a half. He went really, really good. He seemed happy, fresh and full of himself.”

Following his victory in last year’s Pegasus, Knicks Go went on to establish himself as the premier older horse in North America, finishing off his 2021 campaign with a four-race winning streak, including victories in the Whitney (G1) at Saratoga and the Nov. 6 Breeders’ Cup Classic (G1) at Del Mar.

“We’re trying to do what we did last year with shipping from New Orleans here. We didn’t have a plane this year, but that’s all good. That’s not going to be an excuse. He’s capable of getting on a van and taking his show on the road. He did that from Ellis to Saratoga for the Whitney the week of. It’s a similar situation,” Cox said. “He certainly seems like he hasn’t regressed one step from the Breeders’ Cup. We’re in good shape.”

In this year’s Pegasus World Cup, Knicks Go, whose victories last year were accomplished with dazzling speed from gate to wire, is expected to receive a serious challenge for pacesetting duties from CHC Inc. and WinStar Farms LLC’s Life Is Good, the front-running winner of the Nov. 6 Breeders’ Cup Dirt Mile (G1) at Del Mar.

Knicks Go, owned by Korea Racing Authority, once again will be ridden by Joel Rosario, who has been aboard the Maryland-bred son of Paynter in all 10 starts since he was transferred to Cox.