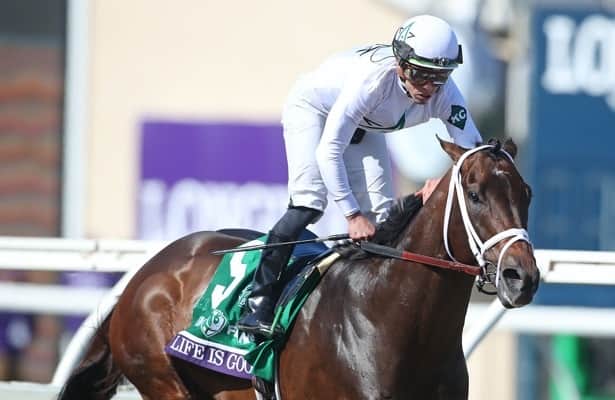 Brad Cox says Knicks Go will not back down Saturday from a speed duel.

“We’re going to break running, hopefully get to the lead,” Cox said.

The same goes for fellow trainer Todd Pletcher and his speedy colt, Life Is Good.

“Hopefully Life Is Good is going to fight back and keep going,” Pletcher said. “That’s what I’m hoping for. That’s the $3 million question, right?”

Who is faster? Racing fans can find out when that duo headlines the Grade 1, $3 million Pegasus World Cup Invitational.

Knicks Go (6-5) and Life Is Good (7-5) take the same pace-setting style into their showdown at Gulfstream Park. Both figure to fight for the early lead, Knicks Go from the inside post and Life Is Good from the No. 4 stall in a nine-horse field.

Knicks Go won the 2021 Pegasus in front-running fashion under jockey Joel Rosario. He shot to the lead, opened separation along the backstretch, led by three lengths into the stretch, and scored by 2 3/4 lengths over runner-up Jesus’ Team in geared-down fashion.

The son of Paynter posted four other gate-to-wire victories last season, including at Saratoga in the Whitney Stakes (G1) and Del Mar in the Breeders’ Cup Classic. He will likely be named 2021 Horse of the Year when Eclipse Award winners are revealed Feb. 10.

Cox enters Saturday’s race knowing the 1 1/8-mile distance is no problem for Knicks Go. He won at nine furlongs last year in the Pegasus and the Whitney, and 10 furlongs in the Classic.

“I think last year, we probably had a little bit of a question mark if he could perform at a mile and an eighth,” Cox said. “He’s obviously proven that. … So we’re coming into it with more confidence this year than last year.”

Knicks Go will start his stallion career after the Pegasus, the 25th and final start of his career. The 6-year-old has earned $8.67 million and won 10 races, five against Grade 1 competition.

The trainer said one of Knicks Go’s greatest strengths comes in the way he makes his turns during a race. The Classic winner scored all five of his wins last year around two turns but did not sustain early speed when taking one-turn defeats in the Saudi Cup (G1) and Metropolitan Handicap (G1).

“I think from the half-mile pole to the 3/8 pole, he gets a little distance, and the jocks and other horses have to go into chase mode,” Cox said. “By the time they get to the quarter pole, he’s still kind of cruising along and they’ve been under a ride for an eighth of a mile, sometimes even a quarter of a mile, and can’t catch him.

“He’s a speed horse that has devastating speed and he’s able to put horses away on the far turn.”

“Devastating speed” could just as easily be used to describe counterpart Life Is Good, who brings a 5-for-6 record into the first race of his 4-year-old season.

Life Is Good has secured the lead by the quarter-mile mark of each of those six starts. The only horse to pass him was Jackie’s Warrior, who handed the Into Mischief colt his lone loss by a neck at Saratoga in the H. Allen Jerkens Memorial Stakes (G1).

In Life Is Good’s last start, he blitzed the Breeders’ Cup Dirt Mile by 5¾ lengths under jockey Irad Ortiz Jr. Ginobili moved up to challenge him at one point, but he put that rival away and coasted past the wire.

“With Life Is Good, you’re talking about a horse that, if you wanted to, could be the best sprinter in the country,” Pletcher said. “He’s naturally just very quick, very fast. He’s also shown in the Dirt Mile that he has the ability to go at a high cruising speed and keep going. And that’s what we’ve seen from his training.”

Knicks Go holds a significant edge in what Cox calls “seasoning,” with his 24 previous starts four times as many as Life Is Good’s six. Pletcher’s colt – who made his first three starts in late 2020 and early 2021 for trainer Bob Baffert – also is stretching out to 1 1/8 miles for the first time.

“Everything he’s shown us in the morning indicates that he’ll run further,” Pletcher said. “So we’ll let him run his race. Some of it’s going to be jockey decision. You’ve got to make sure your horse is comfortable. But we’re not looking to alter his running style.”

Pletcher won this event five times when it was the Donn Handicap but is looking for his first victory since it was rebranded into the Pegasus in 2017.

That inaugural Pegasus brought a highly anticipated showdown between flashy 4-year-old Arrogate and California Chrome, making his career finale as a 6-year-old. Arrogate got the best of that matchup, crossing first while his older rival was strung out wide and finished ninth.

Pletcher recalled that Arrogate vs. California Chrome showdown when looking ahead to Life Is Good’s battle with Knicks Go.

“I think anytime you have two horses of this caliber,” Pletcher said, “especially two horses that have similar running styles, it makes it a very exciting matchup.”