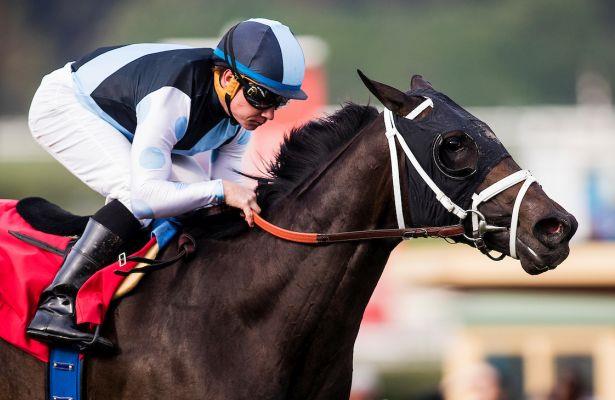 Photo: Alex Evers/Eclipse Sportswire
The trouble line for Paved explains her disappointing 12th-place finish in the Breeders’ Cup Filly & Mare Turf on a good course Nov. 3 at Churchill Downs: “bumped, checked 1st turn.”
Draw a line through the race, says Michael McCarthy, trainer of the Quality Road filly, who is set to rebound in Saturday’s Grade 1, $300,000 American Oaks at a mile and a quarter on turf.
“Obviously we didn’t get the trip we were looking for on a turf course that wasn’t to her liking,” McCarthy said. “We’ll try to regroup on Saturday.”
Meanwhile, City of Light, the only runner to defeat Horse of the Year contender Accelerate this year, will work this weekend for a rematch with the John Sadler trainee in the $9 million Pegasus World Cup at Gulfstream Park on Jan. 26.
City of Light handed Accelerate a neck defeat in the Oaklawn Handicap on April 14.
The field for the Oaks, Race 8 of 10 with a first post time of noon ET: Colonia, Joe Bravo, 6-1; K P Pergoliscious, Tyler Baze, 20-1; Amandine, Mike Smith, 4-1; Princess Warrior, Brian Hernandez Jr., 6-1; Paved, Drayden Van Dyke, 3-1; Retro, Brice Blanc, 30-1; Competionofideas, Joel Rosario, 4-1; and Californiagoldrush, 5-2.
Kodiak West was scratched.
ROBERT J. FRANKEL STAKES HONORS LATE, GREAT TRAINER
The Grade 3, $150,000 Robert J. Frankel Stakes honoring the late Hall of Fame trainer will be run tomorrow, and there’s barely a race tracker alive in Southern California or elsewhere who doesn’t have a tale about the legendary horseman who died at the age of 68 on Nov. 16, 2009.

Tony Matos is no exception.

“Frankel was the one who hooked me up with Angel Cordero Jr. at Aqueduct in New York years ago,” said the veteran agent, currently representing 2017 Eclipse Award winner as outstanding apprentice Evin Roman.
“I had another jockey at the time and Angel had another agent, but Bobby got us together. I was his agent for 11 years, and when I came to California, Bobby was always a good friend of mine.
“I won the Kentucky Derby twice with Angel, on Cannonade (1974) and Bold Forbes (1976), and it wouldn’t have happened if it weren’t for Bobby.”
The field for the Frankel, for fillies and mares, 3 and up at 1 1/8 miles on turf: Lucy De, Flavien Prat, 8-1; Escape Clause, Ruben Fuentes, 7-2; Quebec, Joel Rosario, 8-1; Fahan Mura, Edwin Maldonado, 5-2; Sweet Charity, Tyler Baze, 5-1; Gliding By, Drayden Van Dyke, 12-1; Amboseli, Kent Desormeaux, 8-1; and Excellent Sunset, Rafael Bejarano.
YOUNG TRAINER PROVES A QUICK ‘LERNER’
Andrew Lerner is a fresh face among Southern California trainers who is making an impact thanks in no small part to the use of social media. The Agoura Hills native has 20 head on hand for Santa Anita Winter Meet.
The 29-year-old graduate of Arizona State numbers Vindicate Racing, Del Mar Summer Racing Club, Jack Schwartz and Eric Homme as principal owners.
“We’re excited to be back here for the long haul,” said Lerner, who learned the basics during a tour with trainer Mike Pender.
“We have some nice horses and some two-year-olds coming in. We have a promising filly named Arctic Roll we hope to campaign here. We’re optimistic about the future.”

Department of Corrections: Contrary to an item that appeared here one week ago, retired Hall of Fame jockey Gary Stevens will not be going to work for Aaron Gryder. “I was supposed to have my back operated on yesterday, but the surgery has been put back a few days,” said Stevens. “Aaron’s a good friend, but I’m not in a position to go to work for anyone.”

Finish Lines: John Sadler has “nothing written in stone” for Gift Box’s next race, “but he came back really good, so we’ve got a lot of great choices.” Gift Box, making his first start since last March and his first for Sadler and principal owners Kosta and Peter Hronis, won the San Antonio Stakes (G2) opening day by a half-length under Joel Rosario. Meanwhile, Horse of the Year contender Accelerate breezes 6:30 Saturday morning (PT) in preparation for the $9 million Pegasus World Cup at Gulfstream Park on Jan. 26. Sadler’s assistant trainer, former jockey Juan Leyva, will be aboard. Sadler said Catapult will work Sunday for the $7 million Pegasus World Turf Cup, part of the Pegasus World Cup Invitational Series.

Agent Derek Lawson has Flavien Prat booked to ride Gray Magician for Peter Miller in the Sham Stakes (G3) for 3-year-olds at one mile on Jan. 5.

Kent Desormeaux, approaching a career milestone of 6,000 victories in North America currently at 5,993, credits horsemen and his family for his long and winding road to success. “I’ve been blessed,” said the three-time Kentucky Derby winner, who turns 49 on Feb. 27.

McKinzie’s overpowering move winning Wednesday’s Malibu Stakes (G1) by 4 ¾ lengths was unprecedented according to jockey Geovanni Franco, who rode sixth-place finisher Calexman. “I never heard a noise like that from a horse going by me before,” Franco said.

It was uncharacteristically windy Friday morning at Clockers’ Corner. How windy was it? “It was the first time,” one trainer said, “I ever spit in my own eye.”