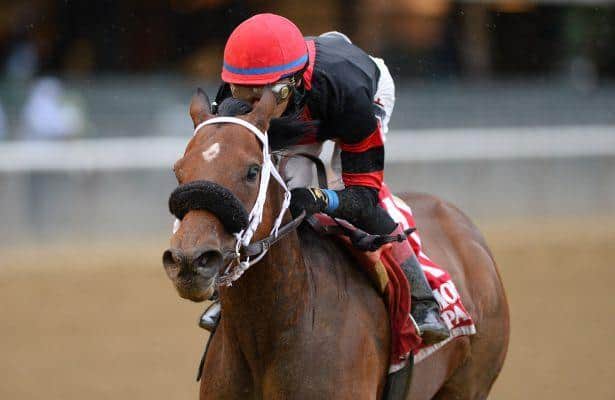 The 4-year-old daughter of Ghostzapper settled close behind West Coast Chick and Momameamaria, who pressed through the early quarter-mile in 22.24 seconds and the opening half in 45.25. Ortiz waited patiently for a seam to open between the leaders and, eyeing enough room on the outside of West Coast Chick at the top of the stretch, stormed Paulassilverling through her rivals to draw clear under the wire.

"I knew I had to break out of there and made [West Coast Chick] and [Momameamaria] go," said Ortiz. "I then sat and then she went like nothing. It felt like in two jumps she was in front of them."

Paulassilverlining, who won the Grade 3 Distaff over next-out Grade 2 Ruffian winner Cavorting, her first graded victory in more than 18 months, returned $2.40 as the overwhelming 1-5 favorite and completed the 6 ½ furlongs in 1:15.82.

"Jose gave her a perfect ride," said winning trainer Michelle Nevin, who also teamed up with Ortiz to win Race 3 with Touchofstarquality. "What more could we want? Each step she shows us more and more with her development. We're not sure where we're going to go next but she definitely showed us a lot today."

West Coast Chick finished second, ahead of Stormy Sky in third. Momameamaria and Blithely completed the order of finish.

One race earlier, Lightstream recovered from a slow break to keep her perfect record intact in the $100,000 Soaring Softly for 3-year-old fillies on the Widener turf.

Trying the grass for the first time in her three-race career, the lightly raced Harlan's Holiday filly spotted her rivals a few lengths out of the gate but quickly regrouped under jockey Eric Cancel. Tracking a sharp early pace set by Wonderment, who led the field of seven through an opening quarter-mile in 22.90 seconds and a half in 45.84. Cancel tipped Lightstream out in the turn and the filly responded with a hard charge through the stretch, catching Summer Reading in the final strides to win by a half-length.

"I always get worried when they break a tad slow like that but it seems to be that her best efforts, her three starts, have been that way," said trainer Brian Lynch.

"At first, it looked like he was going to take her on the inside and she got stopped there," he said. "So he got her out to the outside and the pace was cooking and the turf's been fast all day. I didn't know if she could get to them from where she was, but the good ones come from where she came to do what she did. Thank God she's on our team and we're not playing against us."

Lightstream, owned by Up Hill Stable and Head of Plains Partners, debuted as a 3-year-old in March with a 2 ¼-length maiden special weight victory that garnered an attention-grabbing 103 Beyer Speed Figure. The $55,000 yearling purchase successfully stepped up into the stakes ranks in her next start, taking the Grade 3 Beaumont by three-quarters of a length at Keeneland.

Lightstream could be making a return engagement at Belmont this summer, said Lynch, admitting that he will take a keen look at the Grade 1, $1 million Belmont Oaks Invitational on July 9, during the Stars & Stripes Festival.

"It's a great option to have," he said of the Oaks, a Breeders' Cup "Win and You're In" contest. "Hopefully, she qualified herself to get an invitation to that and it's certainly on the radar. I'll have to consult with my owners and, obviously, at this stage, she's eligible for a lot of conditions and we'll just take a deep breath and go from there with her."

Welcoming closed with fury to finish third, a neck behind Summer Reading. Saharan, Seaside Schiller, Wonderment and Brinkley completed the order of finish.

Main track only entrants Clair de Lune and Estelle were scratched, as well as Morethanjusthello.