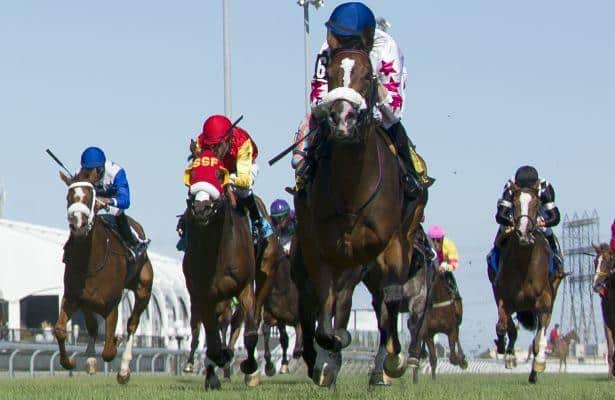 Robert Marzilli's Caren, patiently handled by Jesse Campbell, made the lead and never looked back en route to a comfortable score in Sunday's $251,600 Wonder Where Stakes, third leg of the filly Triple Tiara, at Woodbine.

Trained by Mike DePaulo, the Society's Chairman bay competed in all three legs of the Triple Tiara finishing third in the Woodbine Oaks, presented by Budweiser, before taking the second leg, the Bison City Stakes, in her familiar front-running fashion.

The start of the 1 1/4-mile turf event was eventful as Wonderland, after being forced inward and bumping with favoured Gamble's Ghost, dismounted jockey Jim McAleney.  Caren, sent to post at odds of 5-1 in the field of 13, was away quickly and set a moderate pace with Conquest Dynasty and Neshama, the Oaks winner, tracking her early foot.

Caren led the field to the top of the lane with a 3 ½-length advantage and had plenty left in the tank to secure a three-length score.  Conquest Dynasty carried on for place, a neck the better of Swoop and Strike. Zermatta, at odds of 122-1, rallied to complete the superfecta.  Caren covered 1 1/4-miles over a firm E.P. Taylor Turf Course in 2:03.10.  An inquiry into the start of the race resulted in no changes.

Campbell was thrilled with the effort of Caren who he has now partnered to six added-money wins, including victories in the Shady Well, Nandi, Victorian Queen and Princess Elizabeth Stakes in an electric juvenile campaign.

“She was comfortable out there,” said Campbell. “The filly learned how to rate herself nice. She’s just a pro. She’s just gotten to where she doesn’t want me to be real aggressive any more. She’s given me everything she has to begin with. We let her do her thing, and she just keeps on truckin’.”

Caren, bred in Ontario by James A. Everatt, Janeane A. Everatt and J. Arika Everatt-Meeuse, banked $150,000 in victory while improving her record to 7-2-2 from 12 starts.

Tiz Imaginary, under a perfect trip from pilot Emma-Jayne Wilson, bested a talented field of ten in Sunday's co-featured $143,300 Duchess Stakes, at Woodbine.

Trained by Mike Doyle for owner Windhaven Farms Inc., Tiz Imaginary returned to sprinting in the seven furlong Tapeta event for sophomore fillies after competing in the first two legs of the filly Triple Tiara where she finished seventh in the Woodbine Oaks and fifth in the Bison City Stakes.

With Wilson aboard for the first time in the Duchess, Tiz Imaginary settled behind the early speed of R Girls a Charmer who rocketed through splits of :22.07 and :44.73 while under pressure from Moonlitediscretion. Moonlit Promise, sent to post the 3-2 mutuel favourite under Luis Contreras, attempted to launch her run through the turn but lacked racing room inside of the rallying Miss Katie Mae and Cactus Copy.

R Girls a Charmer maintained a precarious lead at the top of the lane but the perfectly positioned Tiz Imaginary, full of run, took command and surged to a 1 1/2-length victory. Moonlit Promise found racing room late in the lane and made a valiant run for second, a neck in front of Calling Rhy Rhy.  Tiz Imaginary covered seven furlongs in 1:23.56.

Wilson hurried home to Woodbine for Sunday's card after spending Saturday riding in the Shergar Cup at Ascot, in England, as the captain of 'The Girls' team.

"Watching her replays, she's a pretty impressive horse and she has a nice late run," said Wilson. "Mike said to let her be where she's happy and she what unfolds. My horse had a nice path inside the speed along the rail. A beautiful hole opened up and as soon as I asked her, she shot right through like an older horse. When they run like that, you know they want to be racehorses."

Tiz Imaginary enjoyed success right out of the gate in sprint events, winning her debut in October by 2 1/2-lengths.  The Tizway bay, out of the Mr. Prospector mare Imaginary Gold, came right back to win the Fanfreluche before ending her juvenile campaign with a fifth-place finish in the Glorious Song Stakes.

Her 2016 season started with a game third-place run in the six furlong Star Shoot Stakes, setting up a rallying 1/2-length score in the seven furlong Fury Stakes ahead of her Triple Tiara attempts.

Tiz Imaginary, bred in Ontario by William D. Graham, banked $90,000 in victory while improving her record to 4-0-1 from eight starts.

Oklahoma Derby Analysis: Best Actor leads the cast
If Best Actor is a name you’re unfamiliar with, do...