How Three Diamonds is vying for Saratoga owning title 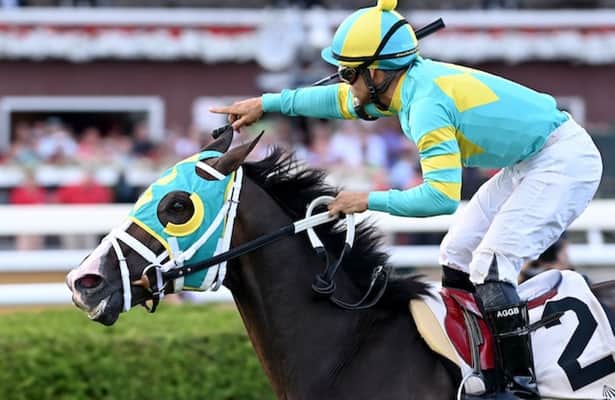 Look back at Saratoga's leading owners and trainers in the last few years, and a few names show up repeatedly. Klaravich Stables, Michael Dubb, Repole Stable among the owners. Nobody but Todd Pletcher and Chad Brown among the trainers since 2010.

That is a trend that might be in the midst of change.

Halfway through this year's meet, Kirk Wycoff's Three Diamonds Farm stands at No. 2 among owners, with six wins to Klaravich's seven. Three Diamonds also had the second-most wins among owners in the 2019 meet and stood in third place last year.

"I just think we're having a good year," Wycoff told Horse Racing Nation this week. "Sometimes you have good years and sometimes it's a little tough."

The trainer standings show an even greater change: Mike Maker is at the top of the list with 16 wins. Brown is in second place with 14, and Pletcher and Steve Asmussen are tied for No. 3 with 11 each.

The ascendance of Wycoff and Maker is not a coincidence. Of Three Diamonds' 24 starts at Saratoga this year, Maker was the trainer for all but one.

Wycoff said Maker "trains most of our horses for us because he is easy to work with. And he's happy training horses of all levels. And we're not the owners that are going to go spend three, four, five, $600,000 on yearlings and 2-year-olds. That's not our game plan. And so I call Mike and say, 'Will you train this horse?' he doesn't ask me whether I paid 10,000 or 210. He says yes."

And Three Diamonds' six winners during the meet? All trained by Maker.

"He does well with all levels of horses, because he's pretty easy on his horses. If you look, there's not a lot of fast works. And the average ownership period that Three Diamonds owns horses for is typically two, three, four years. And longevity is important in this game, especially with what's happened with purses. Most horses aren't going to start more than 30-40 times. So if you run them 14 times a year, they're not going to be around very long. We like to run six and eight or 10 times a year and closer to six or eight for the better horses."

Maker, for his part, told HRN in a text message that Wycoff "is as passionate about horse racing as anyone I have ever met. Sales, racing, breeding, handicapper – he does it all. Very hands-on, which gives you different perspectives."

The stable got its first graded-stakes win of the meet when Cross Border scored in the Bowling Green (G2) on July 31.

"Cross Border is a classic mile-and-an-eighth, a mile and three-eighths horse," Wycoff said. "He loves Saratoga. My son picked him out because he was a New York-bred, and he likes it here. And he ran pretty good at Fair Grounds, which is a track that looks about like this, and Gulfstream. He's a very handy horse. I'll look forward to having him run back in the Sword Dancer."

The 7-year-old ridgling finished second to Channel Maker in last year's edition of the Grade 1 race.

"I think Mike now has the owners, of which we would count ourselves as one, but with Paradise and with Mike Dubb and with Repole, he's got the kind of horses that you can compete at a meet like Saratoga. And I know it's one of his goals to someday win this meet; we're happy to be a part of it."