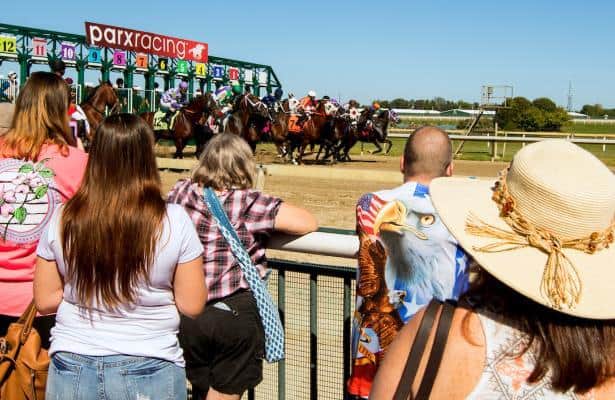 A jockey and two trainers at Parx have been suspended based on items found in their possession during a sweep during Pennsylvania Derby week. Jockey Edwin Repollet-Rivera was suspended for having an electrical device at the racetrack gates; trainers Cesareo Marquez and Miguel Penaloza both were suspended for possessing loaded syringes and one or more needles.

In a ruling dated Friday the Pennsylvania Horse Racing Commission said it found two electrical devices when searching Repollet-Rivera at the Parx entrance gates on Friday. In horse racing rulings, "electrical device" typically refers to a buzzer, a small battery-operated device used to shock a horse into running faster. Under Pennsylvania law it is unlawful for a jockey, owner, trainer or anyone authorized to handle a horse to have a buzzer.

The commission said in a ruling dated Monday that Repollet-Rivera appeared before the stewards on Monday and the summary suspension in Friday's ruling was affirmed. The length of his suspension will be determined after a full hearing at a later date. A news release from the Organization of Racing Investigators stated that Repollet-Rivera refused to testify at Monday's hearing.

Under Pennsylvania law, only a veterinarian may possess syringes and needles at the racetrack, unless that person has a specific exemption for a medical condition that requires them to have a syringe at the track. Trainer Marquez had multiple loaded needles and syringes at the Parx stable gate on Friday, according to a Friday ruling by the PHRC and an affirming ruling on Monday.

These are Marquez's first disciplinary rulings; he took out his trainer's license this year. In 73 starts this year, all of which have come across the mid-Atlantic, he has won three times, most recently with Broad Jumper in a claiming race at Parx on Aug. 24.

Officials found two loaded syringes and a needle in trainer Penaloza's barn Friday, according to a PHRC ruling dated Friday. He was summarily suspended, pending a hearing. According to the ORI news release, that hearing is expected to happen Tuesday.

Penaloza has 172 wins in 1,360 starts dating to 2015. His highest-profile win came last year when he won the General George (G3) with Share the Ride. This year he has won 18 times in 142 starts across the mid-Atlantic, most recently with Mani Pedi in a claiming race at Parx on Aug. 30.

Repollet-Rivera, Marquez and Penaloza are denied access to Pennsylvania horse racing facilities during the course of their suspension. They each have the right to appeal in writing within 10 days of these rulings.