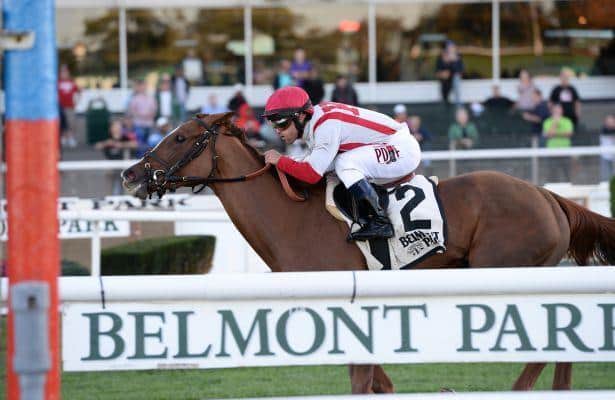 Photo: NYRA
Klaravich Stable and William Lawrence’s  Partisan Politics and Long Lake Stable LLC and Beacon Hill Farm’s Tammy the Torpedo – a powerful 1-2 punch from the stable of trainer Chad Brown – and two-time stakes winner Celestine, who has fashioned a four-race win streak for Hall of Fame trainer Bill Mott, head an overflow field of 3-year-old fillies entered to compete in Saturday’s 25th running of the $200,000 Mrs. Revere Stakes (Grade II) on the Matt Winn Turf Course at Churchill Downs.
The 1 1/8-mile Mrs. Revere, the final North American graded stakes race of the year for 3-year-old fillies on grass, attracted 18 entrants, but the race will be restricted to 14 competitors. It is the featured 10th event on a 12-race Saturday racing program with a first-race post time of 12:40 p.m. (all times EST).
The race is named for Dr. David Richardson and Dr. Hiram Polk’s homebred Mrs. Revere, a mid-1980s star trained by Mott whose career record features six wins at Churchill Downs. Four were stakes triumphs in the 1984 renewals of Churchill Downs’ Regret, Edgewood and Dogwood and the 1985 Kentucky Cardinal. Mrs. Revere won 12 of 28 races and earned $429,546 over three racing seasons. Drs. Richardson and Polk annually provide and present the winner’s trophy for the Mrs. Revere.
Along with Mott, the high-profile roster of trainers represented by fillies in the Mrs. Revere includes Todd Pletcher, the seven-time Eclipse Award honoree as North America’s outstanding trainer who currently leads North American trainers in victories and earnings in 2015; Shug McGaughey, trainer of 2013 Kentucky Derby Presented by Yum! Brands (GI) winnerOrb; Graham Motion, who saddled Animal Kingdom to win the 2011 Kentucky Derby; Chad Brown, winner of two races in the recent Breeders’ Cup World Championships at Keeneland; Mark Casse, also a two-time winner at the 2015 Breeders’ Cup; along with Kiaran McLaughlin, Christophe Clement, Tom Proctor, Kenny McPeek and Robert Reid Jr. Brown and Casse will each saddle two fillies in the race.
Brown, who ranks second in earnings by North American trainers in 2015, could hold the strongest hand among that elite group as he will saddle Partisan Politics, the 4-1 favorite in Churchill Downs handicapper Mike Battaglia’s morning line odds, and Tammy the Torpedo, the 6-1 co-second choice.
Partisan Politics comes into the Mrs. Revere off a victory in Belmont Park’s one-mile, $200,000 Pebbles over Mrs. Revere rivals Devine Aida, the runner-up trained by Christophe Clement, and Isabella Sings, fourth for Pletcher in that race. The victory improved the 3-year-old record for the daughter of More Than Ready to 1-2-0 in four races following a 2014 campaign that ended with a sixth-place finish to her Brown-trained stablemate Lady Eli in the Breeders’ Cup Juvenile Fillies Turf (GI) at Santa Anita. Regular rider Javier Castellano will travel from New York to ride Partisan Politics, who will break from post 11.
Brown’s Tammy the Torpedo ran seventh in last year’s Breeders’ Cup Juvenile Fillies Turf (GI) and also enters the Mrs. Revere off a visit to the winner’s circle. Also a daughter of More Than Ready, Tammy the Torpedo won an Oct. 18 allowance race on the Belmont Park turf in her first race since last year’s Breeders’ Cup run. A winner of two of four lifetime starts, Tammy the Torpedo will break from post five and will be ridden by Florent Geroux.
Phaedrus Flights LLC’s Celestine, the 6-1 co-second choice, brings a four-race winning streak into the Mrs. Revere that includes a narrow victory over Partisan Politics in the $100,000 Wild Applause in her most recent start on June 14 over the Belmont Park turf. The daughter of Scat Daddy has lost only once in five races on the turf and also won Belmont’s Wait A While in May.  Shaun Bridgmohan will ride Celestine, who drew the outside post in the field of 14.
A victory by Celestine would be the second for Mott on the race named for one of the most important horses of the early years of his Hall of Fame career. Mott saddled My Typhoon to win the Mrs. Revere in 2005.
Trainer Mark Casse has entered the duo of Calumet Farm’s Return to Grace and Woodford Racing LLC’s Season Ticket in the Mrs. Revere. The former, a daughter of English Channel ridden by Joe Rocco Jr., finished fifth to Her Emmynency in Keeneland’s Queen Elizabeth Challenge Cup (GI) in her most recent start. The Ontario-bred Season Ticket took the Aug. 15 Wonder Where at Woodbine for her only stakes triumph in nine starts on the year. Corey Lanerie, the leading jockey of the Churchill Downs Fall Meet, will be in the saddle aboard Season Ticket.
A victory by Return to Grace would return legendary Calumet Farm to sole possession of the top spot for stakes wins by an owner at Churchill Downs. Calumet, which has won eight Kentucky Derbies in its storied history, is currently tied withClaiborne Farm with 33 stakes wins beneath the Twin Spires.
Pletcher is represented in the Mrs. Revere by Siena Farm LLC’s Isabella Sings, who ran fourth to Partisan Politics in the Pebbles and was a close runner-up in the Boiling Springs (GIII) at Monmouth Park. Jockey Paco Lopez will ride the daughter of first-year sire Eskendreya, a front-running winner of the Little Silver Stakes on the Monmouth Park grass, from post 10.

Another Mrs. Revere hope is Stuart Janney III’s New York-based Onus, who ships to Kentucky after winning the Commonwealth Oaks (GIII) at Maryland’s Laurel Park for McGaughey. The daughter of Breeders’ Cup Classic (GI) winner Blame has won three consecutive races over the Laurel turf and will break from post 10 under Maryland-based jockey Forrest Boyce.

Other invaders set to swoop-in to Churchill Downs in hopes of securing a victory in the Mrs. Revere include theKiaran McLaughlin-trained Robillard; the Motion-trained Rainha Da Bateria; the Proctor-trained Bobbi Grace (IRE), who ships from Maryland’s Fair Hill Training Center; and Darling Sky, a winner at Philadelphia’s Parx Racing in her most recent start for Reid.

Churchill Downs stars that hope to hold-off the autumn invaders for the Mrs. Revere include Darrel and Sadie Brommer’s Prado’s Sweet Ride, winner of the Regret (GIII) on the Churchill Downs turf on June 13, and Five D Thoroughbreds’ Kathballu, a McPeek trainee who ran a close fourth to Sarah Sis in the recent Raven Run (GII) on the main track at Keeneland. She gets the services of Julien Leparoux, who has won the Mrs. Revere a record four times:Acoma (2008), Marketing Mix (2011), Centre Court (2012) and Sparkling Review (2014).

All starters in the Mrs. Revere will carry 118 pounds.

Four also-eligible fillies were entered in the Mrs. Revere and could draw-in to the race in the event of scratches among the 14 fillies with spots in the starting gate. That group includes Cara Marie (Ricardo Santana Jr., 20-1), America Mon Amie (Albin Jimenez, 30-1), Urtheoneeyelove (Pablo Morales, 30-1) and Weiner Valkyrie (GB) (Geroux, 10-1).