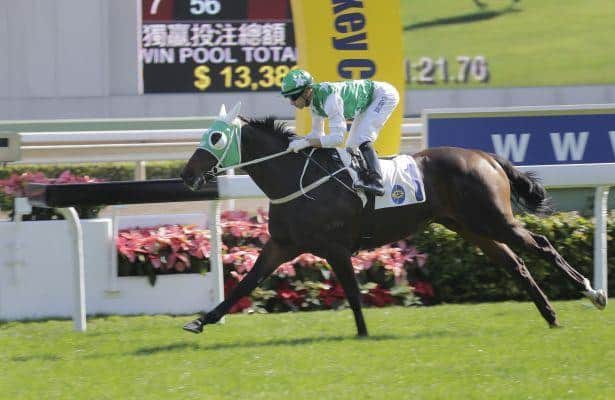 Photo: Hong Kong Jockey Club
The Stewards today interviewed Mr A S Cruz, the trainer of PAKISTAN STAR which, in a 1600 Metre barrier trial conducted at Sha Tin Racecourse yesterday, refused to gallop with the field after travelling approximately 100 Metres.  The Stewards also interviewed J Moreira, the rider of PAKISTAN STAR, in the barrier trial.  Mr K Din, representing the Owner, Mr Kerm Din, was also in attendance.
Jockey Moreira stated that as the horse did at its last start on 25 June 2017, PAKISTAN STAR, despite being vigorously ridden along, refused to stretch out after travelling a short distance and then became detached from the field.  He said whilst PAKISTAN STAR did not completely stop in the barrier trial, as it did at its most recent race start, nonetheless it took some time and effort to have it recommence galloping.
Mr Cruz was again unable to offer any explanation for PAKISTAN STAR’s racing manners in yesterday’s barrier trial other than PAKISTAN STAR has on a number of occasions been reluctant to gallop when on the turf track at Sha Tin.  He added that when he worked the horse this morning, he had removed the hood from the horse in an endeavour to see whether that would make PAKISTAN STAR more alert.

In order to protect the interests of all parties concerned, the Stewards ruled that before being permitted to race again, PAKISTAN STAR would be required to satisfactorily undertake two gallops from the 1800 Metres along the Back Straight on the turf at Sha Tin during track work and if the horse is able to successfully undertake these two tests, the horse would then be required to undergo two satisfactory barrier trials over 1600 Metres on the turf at Sha Tin.  Mr Cruz was advised that these four tests must be completed consecutively and that any reoccurrence of the behaviour exhibited by PAKISTAN STAR at its last race start and in yesterday’s barrier trial would result in the Stewards revisiting the embargo placed upon the horse.