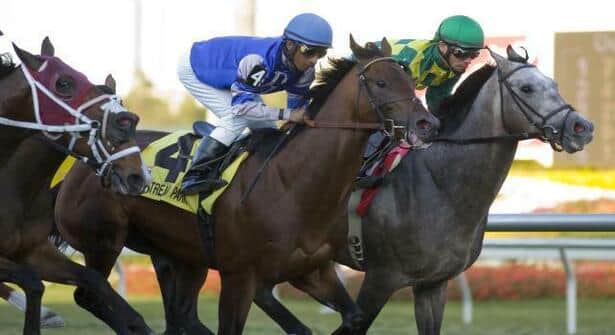 A field of seven horses, including Kentucky Derby runners Paddy O’Prado and Dean's Kitten, are set to go for the 6th running of the $500,000 Colonial Turf Cup (g. II) on Saturday, June 19th at Colonial Downs.

Drawing the inside post was Paddy O’Prado, the best finishing Triple Crown horse to ever run in the Turf Cup since its inception in 2005. Trained by Dale Romans, the El Prado (IRE) colt finished third in the Gr. III With Anticipation Stakes before breaking his maiden in Gulfstream’s Gr. III Palm Beach Stakes. The grey colt then switched racing surfaces and went on to a second place finish in the Gr. I Blue Grass Stakes on a fast dirt track before running third in the Gr. I Kentucky Derby. In his most recent start, the Gr. I Preakness Stakes, Paddy O’Prado ran sixth. Having finished in the money in six of eight lifetime starts, the colt has earned $464,497 and will be ridden by Kent Desormeaux.

In the second post is Workin For Hops, a City Zip colt trained by Michael Stidham who broke his maiden by an impressive seven lengths on first asking. While he encountered trouble in his first graded stakes try, the Gr. II American Turf, Workin’ For Hops redeemed himself in his most recent start by taking the $100,000 Arlington Classic. In four tries on the turf, Workin For Hops has lost only once and has earnings of $142,976. E. T. Baird has the mount.

Kindergarden Kid, a colt owned by Lael Stables and trained by Barclay Tagg, will break from the third post position. After finishing fourth in his first start, the Dynaformer colt broke his maiden and went on to win his most recent race, an allowance optional claimer at Belmont, by ¾ of a length over three year olds and up. He has earned a bankroll of $54,200 in his short career on the turf, and will be ridden by regular rider Cornelio Velasquez.

In the fourth post is Vamos a Ver, a Smart Strike colt trained by Graham Motion who broke his maiden on third asking despite his rider dropping his whip. He then went on to finish sixth in an allowance at Keeneland before winning an allowance optional claimer at Tampa Bay. In his most recent start, Vamos a Ver led the entire way at Colonial Downs to win by 1 ¾ lengths over three year olds and up. The colt has finished out of the money in two of six lifetime starts, with earnings of $58,771. Edgar Prado has the mount.

Winstar Farm’s Doubles Partner, a Rock Hard Ten colt trained by Todd Pletcher, will go to post in the fifth hole. Having finished in the money in four of seven starts, the colt’s greatest victory came in his most recent race, the Gr. II American Turf at Churchill Downs. Doubles Partner, who will be ridden by Garret Gomez, has never lost on the turf and has earned a bankroll of over $180,000 lifetime.

Dean’s Kitten, a colt who has earned over $415,000 lifetime, drew post position six. Bred in Kentucky and owned by Kenneth and Sarah Ramsey, Dean’s Kitten is a Michael Maker-trained colt who broke his maiden on third asking at Saratoga’s turf course. He went on to run decently in several stakes races, including a win in the Vision Stakes at Belmont and a sixth in the Gr. II Breeders’ Cup Juvenile Turf, before winning his first graded stakes race, the Gr. II Lanes End, at Turfway on his first try on dirt. His most recent start, the Gr. I Kentucky Derby, resulted in a fourteenth place finish after a tight start. Alan Garcia is scheduled to ride the Kitten’s Joy colt.

Breaking widest of seven is Two Notch Road, a Partner’s Hero gelding bred in Virginia by James Hackman. After going winless in three starts, Two Notch Road took the Continental Mile Stakes at Gulfstream Park at odds of 107 to 1. Trainer Glenn Thompson then sent the Partner’s Hero gelding to Saratoga for a seventh place finish in the Gr. III With Anticipation Stakes before returning the horse to Monmouth Park this year, where he won an allowance race by two lengths. Two Notch Road, who will be ridden by local rider Sheldon Russell, has won three of seven lifetime starts, with earnings of $81,688.

The Colonial Turf Cup (gr. II) is scheduled to go to post at 5:19 PM as the tenth race on Saturday’s card. Festivities for the event include the Rhythm Bets ‘N’ Brews festival and a motorcycle Ride for the Kids, presented by Bikers Against Child Abuse. First post time is 12:55 PM.

Runhappy progeny are cashing in at longer distances
When Smile Happy powered home to a 3 1/4-length wi...