Paco Lopez ties own Monmouth record with 7 wins, including stakes 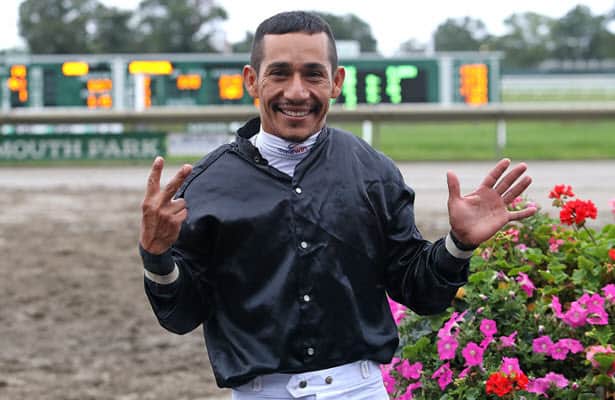 It may be true that records are made to be broken, but jockey Paco Lopez keeps tying his own one at Monmouth Park.

Lopez matched the record he set twice in 2014 by winning seven races on Saturday’s 14-race card, capping the performance with a half-length victory aboard Vigilantes Way in the $100,000 Miss Liberty Stakes.

Lopez, well on his way to an eighth Monmouth Park riding title, won five consecutive races spanning the fifth through ninth races before matching his track record in the co-featured Miss Liberty Stakes aboard the heavily-favored Vigilantes Way.

Trained by Shug McGaughey, Vigilantes Way rebounded from a loss in the Grade 1 Diana in her last start. Prior to that she won the Grade 3 Eatontown Stakes at Monmouth Park on June 20.

In the co-featured $100,000 Rainbow Heir Stakes at 5½ furlongs on the turf, Belgrano found an opening along the rail early in the stretch and burst through for a two-length victory. It marked the first time 79-year-old trainer Frank Russo saddled a winner in a six-figure race.

But the day belong to Lopez, the runaway leader in the Monmouth Park jockey standings with 72. Isaac Castillo, who rode Belgrano to victory, is second with 40 winners.

“I think I was very lucky today,” said Lopez, who won the Grade 3 Charles Town Oaks aboard R Adios Jersey on Friday night. “You look at these last couple of horses I won with and they handled the track. It’s a little wet both on the dirt and turf. I’m lucky this horse (Vigilantes Way) likes this grass course.

“When I looked at the horses I was riding today I felt good. I felt quite a few had a shot. I am very grateful to do this again. I guess the next thing I have to get to is eight wins here.”

Vigilantes Way covered the mile and a sixteenth over a turf course listed as “good” in 1:43.14, having just enough to hold off the late-running Miss Teheran. It was another 1½ lengths back in third to Counterparty Risk.

The victory was the sixth in 14 career starts for the 4-year-old daughter of Medaglia d’Oro, who was bred and is owned by the Phipps Stable. She is 2-for-2 on the Monmouth turf course.

“I was pleased with the way she ran,” said McGaughey. “It was a little bit different. She was stuck there for a minute but Paco Lopez worked out of it and we beat a nice filly who was second.

“I think she likes the quick turns. She does like Monmouth but the quick turns seem to suit her, because she has run good at Pimlico. She handles about any type of turf course. So when it rained a little it didn’t bother her. I think we’ll try her in the Violate Stakes (Sept. 25 at Monmouth Park) next.”

Vigilantes Way returned $3.20 to win in the field of six fillies and mares, three and up.

Belgrano, who won the Virgil “Buddy” Raines Stakes at Monmouth Park a year ago, earned his fourth win in six starts on the track’s turf course. The 7-year-old gelding was coming off a six-length win in handicap company at a mile, with the shorter distance proving to be no issue. He finished two lengths ahead of Grateful Bred, who was a neck better than The Connector.

“After this race I think I can say for sure that this is the best horse I have ever had,” said Russo, who has been training since 1976. “I thought it might be tough for him at the end, especially going shorter, but he sort of got his way at the beginning of the stretch when the rail opened. It was a perfect trip.

“It’s a great feeling. This is the biggest race (purse-wise) I have ever won. I was worried about the rain. If it was off the turf we were out. So I’m happy it stayed on the grass. I think he is at his best right now. Could not be happier with him than I am right now.”