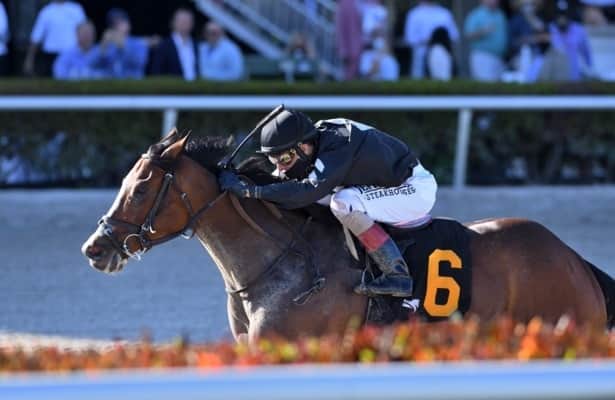 Pacific Gale entered Saturday’s Grade 2, $200,000 Inside Information Stakes without a win since October 2018. She snapped a 17-race winless streak with a strong closing move to become a graded winner.

Trained by John Kimmel, Pacific Gale upset seven rivals at Gulfstream Park in the seven-furlong Inside Information for 4-and-up fillies and mares. The 6-year-old Flat Out mare returned $34.20 as a 16-1 long shot, hitting the wire in 1:22.60.

"Even though she’s oh-fer the last two years, just to see her fire like you’ve never seen her fire was just a tremendous accomplishment for a filly that’s been a bridesmaid against some top quality horses," Kimmel said. "To see her get her due diligence here today is just really, really special.”

Pacific Gale won two of the first three starts in her career, including a Monmouth Park stakes win in September 2017. Since then, the only victory she recorded was an allowance optional claiming win more than two years ago at Belmont Park.

In Pacific Gale’s last start, she ran third at six furlongs a month ago at Aqueduct in the Garland of Roses Stakes. The added furlong of distance in the Inside Information proved advantageous.

Under jockey John Velazquez, Pacific Gale settled in the middle of the field out of the break. Up front, 2-1 co-favorites Cinnabunny and Thissmytime dueled through fractions of 22.45 and 45.13.

Velazquez had Pacific Gale between horses coming through the turn, trailing the top two. The Hall of Fame jockey found running room in the four-path turning for home, while Cinnabunny entered the stretch with a length lead but gave way.

Pacific Gale powered up to take the lead, scoring by 2 3/4 lengths over runner-up Thissmytime and third-place Piedi Bianchi.

“Finally! I always try to keep her covered up and make one run with her," Velazquez said. "Today was the day. I kept her covered up and when we passed the quarter pole and got to the three-sixteenths pole I got out and she responded right away. It set up the way we wanted to.”

Tobey Morton campaigns the Kentucky-bred Pacific Gale, who now sports a 28: 4-6-5 lifetime record and more than $500,000 in career earnings.