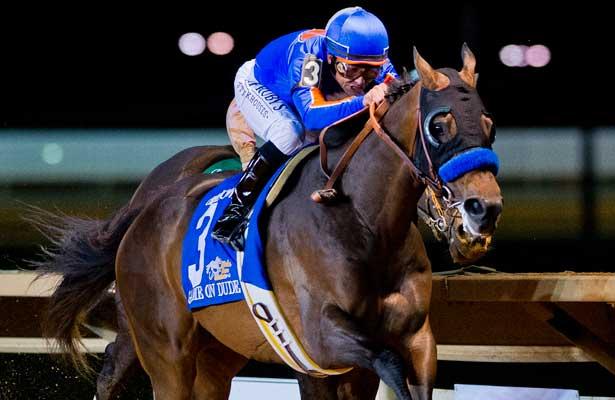 The first name out of the box at Wednesday night’s post position draw for Sunday’s Grade I $1 million TVG Pacific Classic was Game On Dude. The first numbered “pill” out of the bottle which determined the horse’s stall assignment, was “11.”

At that point, the relative silence on the lawns outside the Rancho Valencia Resort and Spa was broken by a loud “Yes” shout from Bernie Schiappa, one of the horse’s owners, and “It’s over” as he moved rapidly to the back of the gathering to make a cell phone call.

“I dreamed about it last night,” Schiappa said later. “I’m elated.” The explanation: post positions No. 7 and 11 have proven lucky for Schiappa’s horses, going back to days when the ones he owned and raced were standardbreds in New Jersey, not one of the top thoroughbreds in the country and the best California-based one.

Hall of Fame trainer Bob Baffert was also pleased with the starting spot in the field of 13 for Game On Dude, who was made the 5-2 morning line favorite by oddsmaker Russ Hudak. “It’s a good draw because he’s on the outside looking in,” Baffert said.

That 12 others chose to take on Game On Dude, who has victories in the Santa Anita Handicap and Hollywood Gold Cup in a 4-for-4 2013 campaign, was not surprising to Baffert.

“It’s the synthetic track, that’s why, it can be a crapshoot,” Baffert said. “I’m not offended. It’s a $1 million race. Everybody thinks they can win. I can’t keep them out.”

The field, from the rail out:

The TVG Pacific Classic is a Breeders’ Cup Challenge race with the winner receiving a fees-paid trip and automatic berth in the $5 million Breeders’ Cup Classic on Saturday, November 2, at Santa Anita.

Doug O’Neill, Richard’s Kid, No. 6 – “I’m super pleased. We’ll be loading near the end, so he won’t have to stand in there very long, and we should be able to get a good spot.”

Mike Pender, Jeranimo, No. 12 – “We can dictate our own trip. We’re the master of our own destiny even if we are a little bit outside.”

John Sadler, You Know I Know, No. 5 and Kettle Corn, No. 7 – “If you would have asked me before the draw what would I like, I would have said somewhere in the middle. For us, it’s a good draw for either horse. Those are kind of interchangeable posts.”

Simon Callaghan, Byrama, No. 8 – “I like it. It’s what we would have chosen. From there, we’ll have a lot of options.”

Tammy Fox, Dullahan, No. 9 – “It is what it is. I don’t know how well the outside posts have been doing here, but the best horse is going to win and if he’s the best, he can win from there.”

Ever have a first date that seemed very promising but wound up having -- to say the least -- its ups and downs?

That’s essentially what happened Thursday morning for jockey Garrett Gomez and Farraaj, the European import Gomez will ride in Sunday’s $1 million TVG Pacific Classic. They met at the appointed 7 a.m. at Barn Y, Gomez was given a leg up into the saddle and proceeded a short distance to the track.

Then, one minute Gomez was up on the back of the 4-year-old son of Dubai Destination and …

“The next thing I knew, I was on the ground,” Gomez, who was unhurt, said later. “He just dropped his shoulder and tried to go out the gap (off the track).” Farraaj was quickly secured by a rider on his accompanying pony and Gomez got back up. But a planned five-furlong exercise intended, in his handler’s words, “to stretch his legs, open his lungs and get a grip on the track,” had to be aborted soon after the start when it appeared sensory overload got to Farraaj.

“Some horses come over here and they’re not used to seeing all this activity,” Gomez said. “They’re used to galloping in groups with everybody going one way and here, there’s horses going every which way.”

Asked if it was uncommon to get unseated on the first encounter with a horse, Gomez said: “For a Grade I stake, yeah.”

Joanne Banks, the traveling head girl for trainer Roger Varian, said of Farraaj dumping Gomez: “That’s a good sign, not a bad one. You wouldn’t want (Farraaj) all head down and disinterested.”

Banks, and regular exercise rider Daria Wozny, expressed confidence that Farraaj would be fine under the circumstances of the race. For Gomez and Farraaj, the Pacific Classic will serve as a second date.

Dullahan Back At The Scene Of The Triumph

Defending TVG Pacific Classic champion Dullahan had an uneventful journey from Churchill Downs to Del Mar on Monday and made his first visit to the track on Tuesday.

Tammy Fox, who accompanied Dullahan to Del Mar last year and served as exercise rider while deputizing for trainer Dale Romans who stayed back east, wasn’t aboard this time. She’s still recuperating from an ankle injury incurred a few weeks ago when she made an awkward landing on a dismount.

“But he looked just like he did last year training on it,” Fox said.

Dullahan’s 2013 campaign consists of two multi-million dollar races in March in Dubai in which he was a non-factor and, after nearly four months off, a third in the Grade III Arlington Handicap over the Arlington Park turf on July 13.

“When he got back to Churchill after the R&R from Dubai, I was only able to get on him two days before I got hurt,” Fox said. “But he was training fine. His race in Chicago was a good prep for him and hopefully he’ll rebound like he did last year and get the money.”