Don’t let his looks deceive you.

“He looks so nice and polite,” said his agent, Paula Bacon, laughing because those are in fact two traits Morales possesses in abundance. “But he’s actually a baby-faced sharpshooter in sheep’s clothing.”

Bacon’s metaphor hasn’t been far off the last two Saturdays at Tampa Bay Downs. After riding five winners on Jan. 1, Morales did it again today, starting 4-for-4 before cooling off to go 5-for-8 with a second. 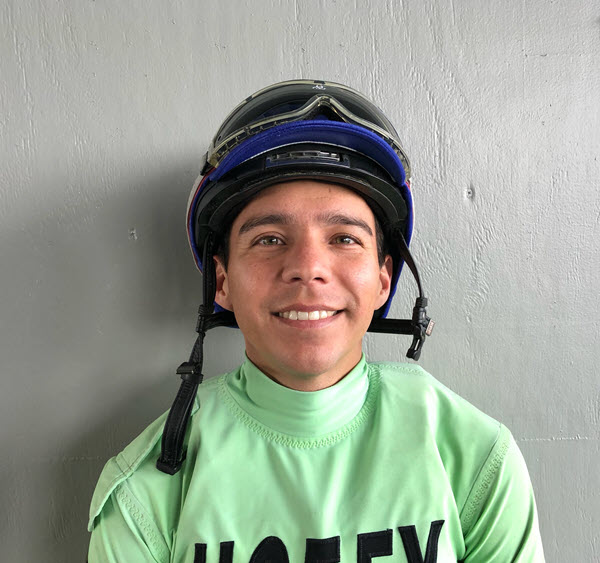 The performance gives Morales 23 victories at the meet, moving him into a tie for first with Antonio Gallardo. It is the third time Morales has won five races on a Tampa Bay Downs card.

“Unreal. That was awesome, what can I say?” said Morales. “I’m just as happy as I can be. This game is definitely weird, and we just have to stay after it every day. Things like this are what help me keep on going, no matter what.”

Bacon, a former jockey, said all the pieces are coming together for the 33-year-old Lima, Peru product to make a run at his first Tampa Bay Downs meet title. Morales has won seven titles at Presque Isle Downs, where he more than doubled the runner-up with 120 winners last season.

“He’s been getting good mounts and he’s making them count,” Bacon said. “He’s riding incredibly well. He has a lot of natural physical ability, he picks things up right away and he is making smart decisions in his races.”

Bacon, who watched today’s card at home, marveled at Morales’s winning ride in the fifth race, a maiden claiming event at a mile on the turf for 3-year-old fillies. After keeping his mount, trainer Tim Hamm’s gray filly Music Amore, in a stalking position early, Morales spotted an opening on the turn for home and steered Music Amore to the promised land, resulting in a length-and-a-half victory from Sign and Seal.

“He made a last-second decision to cut the corner turning for home, and I thought that was a really smart move,” Bacon said. “When he altered course to go inside, I thought that won the race for him.”

Morales’s winning streak was halted in the seventh race on the turf, the Lambholm South Race of the Week, when he finished second aboard Pythoness by a half-length to Bleecker Street, a 4-year-old filly ridden by Hector Rafael Diaz, Jr., and trained by Chad Brown.

“Yeah, it took dang Chad Brown to get him,” Bacon said of the four-time Eclipse Award-winning trainer.

Morales’s first victory came in the second race on Daily Briefing, a 4-year-old filly owned by Curragh Stables and trained by John P. Terranova, II. She paid $8.40 to win as the second wagering choice.

Morales won the third race on Bear Creek, a 5-year-old gelding owned by Mark Hoffman and trained by Dennis Ward. He paid $10.80 to win.

After sitting out the fourth and winning on 2-1 favorite Music Amore, Morales captured the sixth race on 5-2 favorite Curlin’s Thrill, a 5-year-old gelding owned by Sabal Racing Stable and Patrick Rhodes and trained by Darien Rodriguez.

The jockey’s fifth victory came in the ninth race, a come-from-behind effort by 5-year-old Florida-bred gelding Cajun Casanova, owned by Monster Racing Stables and trained by Jose H. Delgado. Cajun Casanova paid $5.80 to win as the second betting choice. “That horse just ran huge today,” Morales said. “He has been running against tough horses, but when things go his way he is a monster. He liked to run and he gives it his all.”

Bacon, who has been retired as a jockey since 2002, looks forward to teaming with Morales throughout the season in hopes of challenging for the top spot.

“We still have to work our butts off to get anyplace,” she said. “This is a very deep jockey colony, but I know Pablo is going to keep to the task.”

Morales agrees with Bacon’s assessment that he is physically and mentally capable of contending. “I’m in good shape and I’m healthy, and that’s the main thing. I’m going to keep on working and wait for the right opportunities, and when I do get them, thank God I’m able to prove myself, because by proving myself to the trainers and owners they’ll opt to ride me. Obviously, I can’t do anything without their help,” he said.

“I’m extremely thankful to all the connections. I do this for myself, my family and the people who root for me. It can be sort of a roller coaster here, but days like this put me in the fight, and hopefully I’ll get in a groove of staying more busy.”