Ownership for all? MyRaceHorse talks Authentic 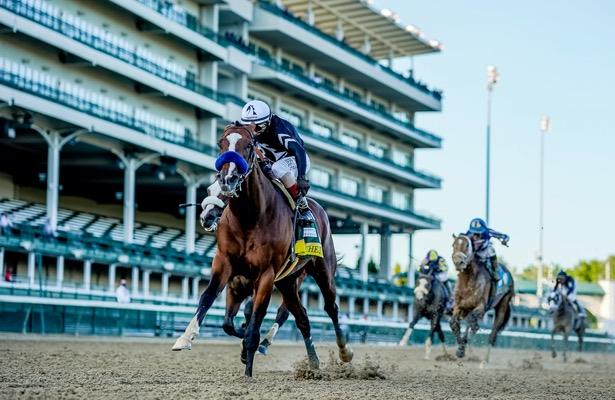 When Funny Cide won the 2003 Kentucky Derby, the gelding’s unique ownership group at Sackatoga Stables made headlines and captured the hearts of fans across America because of the partners’ image as an everyman group.

Sackatoga is still around, but Kentucky Derby winner and Preakness runner-up Authentic has a true everyman ownership group, one with just a $206 buy-in. However, the low price has raised questions about what micro-owners really get for their money.

That $206 could net a return of hundreds. It also could be also be a total loss.

While majority ownership of the colt belongs to Spendthrift Farm LLC, Madaket Stables LLC and Starlight Racing, a 12.5 percent stake is owned by MyRaceHorse, a company that allowed anyone to buy into Authentic for that low price.

“It makes it actually really easy to get involved,” MyRaceHorse founder Michael Behrens said Friday. “If you think about it, it’s kind of hard to try horse racing. You come to the track, you’re going to be intimidated."

The micro-ownership offered by MyRaceHorse makes the buyer a true part-owner of the horse, with 12,500 shares in Authentic being sold. The company is sold out of shares in any horse, according to its website, but it plans to offer more in the future.

Ahead of Authentic’s start in Saturday’s Preakness, Behrens said interest has exploded, leading the company to become more aggressive in acquiring new talent for the MyRaceHorse portfolio.

“The number of people who have signed up to be notified, we’ve never seen an amount this high,” Behrens said.

If everything goes well for their horse, the shares offer the opportunity to make back the initial investment plus hundreds of dollars through his breeding career.

But like any other investment, the shares are not without risk, and a slow or injured horse could lead to the customer losing his or her $206.

As for payouts, the company offers shares of winnings to owners as well as any sort of post-racing earnings. But for Authentic's Kentucky Kentucky Derby victory, the owners will not see any sort of profit. Those winnings will go toward paying MyRaceHorse’s share of a $9 million kicker to the previous owners.

A kicker is a portion of the sale agreement that raises the purchase price if the horse accomplishes an agreed-upon objective, such as a Derby win or an Eclipse Award emblematic of a championship.

Authentic has five kickers listed in MyRaceHorse’s filings with the U.S. Securities Exchange Commission. Some of them are a Grade 1 victory, which was already hit, a Breeders’ Cup Classic victory and winning the 3-year-old Eclipse championship and/or Horse of the Year. The Kentucky Derby kicker was by far the most expensive.

According to Behrens, a win in the Preakness also would not have generated a payout, again because of the Derby kicker.

“We want to pay down the debt,” Behrens said. “We want to get that stallion revenue as soon as we possibly can, and since we didn’t make the shareholders pay that liability — the kicker — we want to get that paid off as soon as possible so when he gets into the shed, we can start providing those annual dividend checks.”

If race winnings and money from investors are not enough to cover the kickers and other costs, they will be paid back from stallion fees, with a 3.5 percent annual interest rate.

MyRaceHorse claimed in a statement on social media after the Kentucky Derby that the owners will “reap the dividends” of Authentic’s stud career, which became more lucrative with the Derby victory.

As for what those dividends will look like, a lot can change between now and when Authentic goes to stud. Elliott Walden, CEO of WinStar Farm, which owns Triple Crown winner Justified, estimated that if he was sent to stud this year, Authentic would command a stud fee of between $30,000 and $40,000.

Walden added that the fee could go up to about $70,000 or higher if all goes well for Authentic in the future. Even if he were to continue racing but start losing, Walden said, his rate would not fall very far.

Walden said he imagined the colt would be able to cover about 200 to 250 mares per year. To do some rough math and assuming the colt goes to stud after this season, 200 multiplied by $40,000 would be $8 million.

The 12.5 percent share owned by MyRaceHorse would come to $1 million. Dividing that by 12,500 shares would come to $80 per share annually, assuming the colt’s stud fee stays exactly the same every year, which is usually not the case.

At that rate of return, and without any more kickers, it would take about three years to earn back the original $206. This would make the investment much more worthwhile than other “shares” available in the sports world, particularly those offered by the NFL’s Green Bay Packers, who have never paid a dividend.

The potential for loss also exists, though at a much smaller level than in traditional horse ownership.

“It’s tough to promise, and we want to be careful on that,” Behrens said. “In terms of do you really do it for the investment? That’s a pretty risky proposition, but if you love it and you wouldn’t mind getting a little bit of money if you’re right, that I think is the perfect disposition to go into it with.”

At a time when the sport is in need of fresh blood in the ownership ranks, the concept could plant a seed that turns shareholders into full-blown horse owners. According to Behren, that has already happened.

“We’ve actually raced against our micro-share owners before,” Behrens said. “When we first started it, people assumed what we were doing was giving accessibility because of price point. That’s a big part of it … but it’s proven to be a really interesting way for someone to try it.”

In the future, Behrens said, he expects to have competition in racing’s micro-share space. He also said the company is in the process of creating an online secondary market for micro-shares.

And although Authentic could go to stud after this season, Behrens said the plan is to continue racing for another year, though that plan could always change.

“We’re hopeful that there will be a 4-year-old campaign,” Behrens said. “But we’re going to leave that in the hands of (Spendthrift Farm). At the time, after the Breeders’ Cup, we’ll make that decision there."