Tiz the Law owners confident for Travers after convincing wins 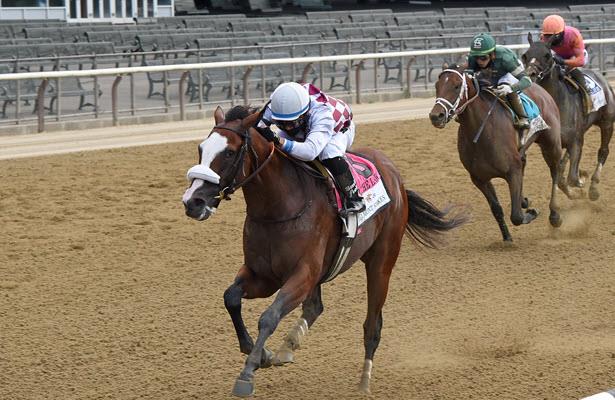 After winning the Belmont Stakes, Tiz the Law is clearly the horse to beat in Saturday’s Grade 1 Travers Stakes. How good is the colt trained by Barclay Tagg and owned by Sackatoga Stables?

Good enough that he’s shaping the plans of a Hall of Fame trainer of several other Kentucky Derby contenders.

“I’ll get an idea if I can run with him or not,” Bob Baffert, who trains Uncle Chuck, also in the Travers, said on a National Thoroughbred Racing Association media call on Tuesday. “It’s going to be exciting at the same time. I’m hoping we’re as good as he is, so that’s why we’re going [to the Travers].”

“If you look at his three races this year, he’s won each of those convincingly,” Knowlton said during the call. “3 1/4, 3 1/2, 4 1/4 lengths. And Manny, Manny Franco, our jockey hasn’t really had to get after him to get him to win those races.”

For Knowlton, the Travers holds extra importance because it's at Saratoga, near his home base and that of many other members of Sackatoga. It also would be another win in the Empire State for the New York-bred colt, who, in addition to the Belmont, won the 2019 Champagne (G1) at Belmont Park.

“If we could get this win, it would mean an awful lot, I think,” Knowlton said. “In his history and also in the history for the New York bred program.”

Knowlton said that 12 Sackatoga owners will be attend the race, in accordance with Saratoga’s limits on the number of owners who can enter the venue. He expressed hope that all of the stable’s owners, as well as other fans, will be able to attend the Kentucky Derby on Sept. 5.

“If owners weren’t allowed, that would be a big blow,” Knowlton said. “We have 35 partners, and the idea of having an opportunity like the Kentucky Derby, which I think is every horse owner’s dream, if that were to be swept away, that would be a bitter pill certainly for all of us to swallow.”

With the Derby in the not-so-distant future, the Travers will be a distance test for the son of Constitution. In most years, the Run for the Roses is the first attempt at 1 1/4 miles, but the Travers will take that role this year for many contenders.

Knowlton said the new distance doesn’t intimidate him, and neither does running the length four weeks before the Kentucky Derby.

“We think he is well suited for that,” Knowlton said. “He is obviously well rested, the schedule with the pandemic this year has been one where there’s been many weeks between races. … We feel like we have a fresh horse.”