Owner is loyal to Baffert ahead of Illumination’s Saratoga run 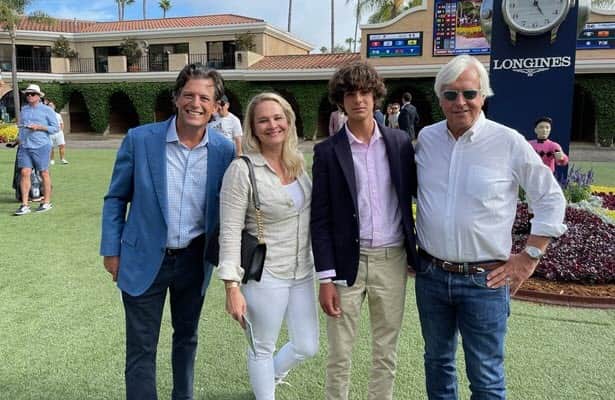 Adding to the intrigue of Saturday’s Grade 1, $500,000 Test Stakes at Saratoga is the expected presence of Illumination.

The 3-year-old filly, winner of only a maiden, is slated to be Bob Baffert’s first starter at a New York Racing Association track since his suspension by NYRA was overturned by a federal judge for failing to meet due process. The suspension and subsequent reversal on July 14 followed Medina Spirit’s failed drug test after winning this year’s Kentucky Derby.

Illumination made the cross-country trip to Saratoga for the Test on Tuesday, where she was bedded down in trainer John Terranova’s stable. Although Baffert is not expected to be in attendance at Saratoga, Illumination co-owner George Bolton will be there. On Tuesday, Bolton made it clear he remains in the corner of his “good friend” and longtime trainer.

Baffert has maintained that Medina Spirit’s positive for betamethasone, which is banned on race day in Kentucky, was the result of a topical cream used to treat a rash.

“Look, if Bob’s guilty of cheating, I’m 100 percent against him. Simple as that,” said Bolton, who last year campaigned Grade 1 winner Nadal with Baffert. “I’m not putting money up for a guy that juices. Or have someone who is juicing beat me. That’s what drives people out of the sport.

“But in the (Medina Spirit) case, there was no malicious intent,” Bolton continued. “I know the cream he uses. He’s used it for 16 years. It’s in the barn. But it shouldn’t have been put on that horse before the Derby. It was a stupid move and he should be guilty of that. But not guilty of injecting a horse to make it run faster.”

Bolton said in 20 years of sending horses to Baffert, his stable had not had a single failed test. He added that the pair spent a day at the races at Del Mar last week, where they had a “heart-to-heart” discussion about Baffert’s travails.

“He’s really banged up,” Bolton said. “The guy was on top of the world, then was gutted. Nobody wants people to look at them like they are a bad guy. But this is not a Lance Armstrong situation. Far from it. That’s why I told him we can’t go down like that if you’re really clean. You have to go back to Saratoga and hold your head high.”

As for Illumination, a $900,000 auction purchase as a yearling, the Test will be a big step up in class in her second start off a more than seven-month layoff. Last year, the Medaglia d’Oro filly, while still a maiden, was third in both the Del Mar Debutante (G1) and Anoakia Stakes and fourth in the Chandelier (G2).

Illumination went to the sideline after October's Anoakia and returned to Baffert’s string at Los Alamitos this spring. She had a work tab covering some three months before finally resurfacing on June 4 and airing by eight lengths in a Santa Anita maiden race. She completed 6 1/2 furlongs in a swift 1:09.81.

“When she ran back we were all scared to death,” Bolton said. “I had pretty low expectations because I didn’t know what she would do. She had never really run great. But I was pleasantly surprised.”

Illumination was scheduled to make a start at the Los Alamitos meeting in early July as a prep for the Test, but the prospective race failed to fill, Bolton said. Instead, the one-time winner heads straight to the main event.

Baffert “called me in May and said we’re going to the Test,” Bolton said.

Hall of Fame jockey John Velazquez, who has started slowly at the Saratoga meet, will ride Illumination for the first time.

“She’s really grown up, gotten taller and longer,” Bolton said. “It’s all that you pray for. But obviously there are going to be some tough horses in there. It’s Saratoga. It doesn’t even have to be a Grade 1. It can be an allowance race and you can get buried there.”

Out of Grade 1-placed Light the City, a Street Sense broodmare, Illumination is co-owned by Bolton, Peter Leidel, Karin Leidel, Kerri Radcliffe and Barry Lipman. Radcliffe signed the high-priced ticket for the filly as agent at the 2019 Fasig-Tipton Saratoga yearling sale. Bolton noted Illumination will run in the colors of Peter Leidel on Saturday.

“I know what we’re getting into with a race like this, but I also think we might have kind of the best upside,” Bolton said. “So that’s fun.”

The Test is part of a blockbuster Saturday card at Saratoga that features the $1 million Whitney (G1) and three other stakes. Entries will be taken on Wednesday.