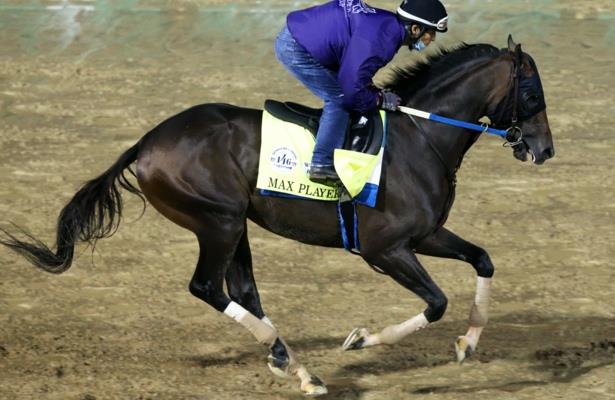 George Hall, co-owner of Max Player, said he doesn't know what's next after the colt's fifth-place finish in the Kentucky Derby.

For now, he's still thinking about what happened at Churchill Downs on the first Saturday in September.

Going into the race, signs were encouraging for Max Player.

After winning the Grade 3 Withers in February, the Honor Code colt went on to third-place finishes in the Belmont Stakes and Travers Stakes — both of which were won by Derby favorite Tiz the Law.

Hall and co-owner SportBLX Thoroughbreds switched trainers after the Belmont Stakes, to Steve Asmussen from Linda Rice. Hall said at the time that Asmussen "has won a lot of races at Churchill Downs, and as far as I could tell, he seemed to be the best fit. I talked to a lot of people and got a lot of advice."

Hall said Monday that doesn't know what's next for Max Player, who was bought as a yearling for $150,000.

"We want to give him a little bit more time and see how he’s doing, and we’ll obviously look at what races are available. We’ll see how quickly he’s ready to run. But he came out of the race in great shape, and he’s starting to work out again, so we’ll see. We really don’t know."

Max Player had his first work since the Kentucky Derby on Monday, breezing 4 furlongs in 51.50, ranking 46th out of 49 works at the distance.

The colt's effort in the Kentucky Derby was both disappointing and encouraging, Hall said.

"If you look at it, we never really were too happy with the 2 post, which turned out to be the 1 post" when Finnick the Fierce scratched. "As everybody knows, in the Derby, with so many horses, the inside post is a little tricky.

"He came out of the gate slow to begin with, so he was immediately behind horses," Hall said. "But I think he just got too far back and had too much to do at the end. But he certainly came running and showed a lot of heart at the end and passed a lot of horses. So we were pleased with the end, disappointed with the start. But in terms of his last quarter or half a mile, his pace was pretty good."

Another factor, Hall said, might be that Max Player had a new jockey aboard in Ricardo Santana Jr.

"One of the things that has been disappointing with this whole pandemic situation is we couldn’t keep consistency with jockeys," Hall said. "Joel (Rosario) couldn’t come down. I think Ricardo is a terrific jockey, but he’s never raced the horse before. I think Joel Rosario probably learned a few things and had some experience riding him in two races, and then we had to have a fresh start with Ricardo. Hopefully, we’ll get a little more consistency in jockeys, going forward."

Hall said Max Player is "a really calm horse. As I understand it, he takes care of himself, he’s happy to lie down, he eats all his food, he doesn’t get himself stressed out. I think he’s really a great horse from a personality standpoint. That being said, his personality needs to rise to the occasion and get out of the gate and start moving a little quicker."