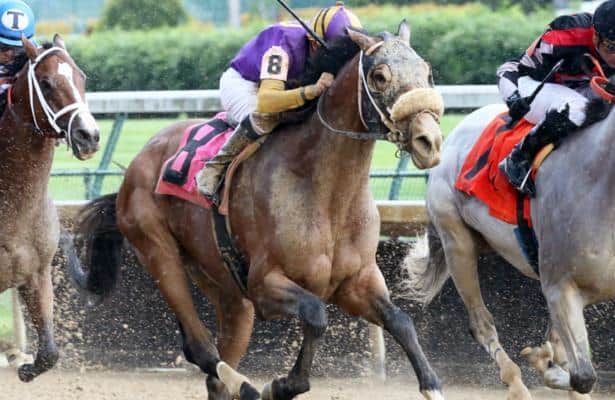 Setting himself up for a graded stakes start next, Owendale rallied from the back of the pack Saturday and emerged victorious from a three-wide duel to the wire in Churchill Downs’ $100,000 Blame Stakes.

As scattered showers began to douse the Twin Spires, Owendale rallied off sharp fractions of 22.74 seconds for the quarter mile and 45.63 for the half over a track still rated fast. He needed every bit of the one-turn mile to get there in front, sweeping past outside of upset-minded Everfast and Silver Dust in the final furlong.

Under jockey Florent Geroux, the final time was 1:34.74 for Owendale’s first start since he finished second in the Clark Stakes (G1) last November at Churchill. Owendale also won multiple Grade 3 events in 2019 — the Lexington Stakes, Ohio Derby and Oklahoma Derby — as a late-emerging 3-year-old.

"This isn’t his best distance and not the end goal, but it was very exciting to see him return to the races off of a layoff like that," Geroux said.

Brad Cox trains the Into Mischief colt for Rupp Racing. Given he's based at Churchill Downs, Saturday’s victory could propel him on to the June 27 Stephen Foster (G2), a local “Win and You’re In” race for the Breeders’ Cup Classic.

"This definitely puts him in a position to try more graded stakes later on in the year at a better distance going two turns," Cox said. "I thought he was breezing well enough that he would return to the races sharply and ended up doing so. We’ll look like races like the Stephen Foster for his next start but he will like the two turns better.”

After leaving the gates at 7-2, Owendale returned $9 to win, set up by a pace duel between Diamond King and Backyard Heaven, who were head and head into the far turn.

It also helped Owendale's chances that the top-two choices missed the board. Global Campaign, bet to favoritism off a sharp allowance victory at Gulfstream Park, suffered his first defeat around one turn, never factoring, and Mr. Money, another Grade 3 win machine, didn't have enough kick late, finishing fourth.

*Rating is based on HRN fan votes, which rank the Top Active Horses in training.
Owendale Blame Blame (2020)