Owendale eyes graded company after 'the start of a big year' 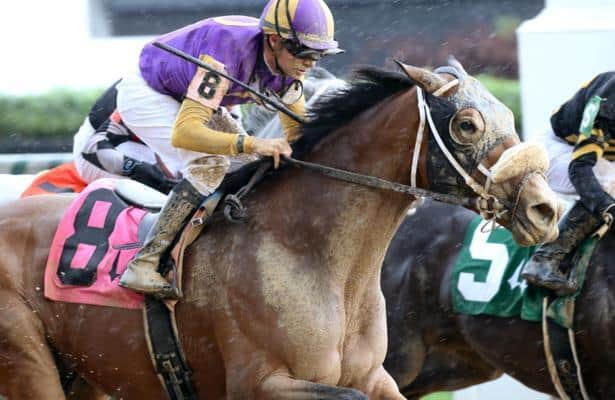 Neither going a one-turn mile off a layoff nor having to do so against a graded-caliber field in Saturday’s $100,000 Blame Stakes were ideal circumstances for Owendale.

But the Into Mischief colt added to his resume at Churchill Downs nonetheless, rallying from last to first in what trainer Brad Cox hopes is “the start of a big year for him.”

Cox said Sunday that Churchill’s June 27 Stephen Foster (G2), which measures a more comfortable 1 1/8 miles, could be next for Rupp Racing’s 4-year-old Owendale. The Foster is also a “Win and You’re In” race toward the Nov. 7 Breeders’ Cup Classic at Keeneland.

“He was able to pick off three Grade 3s last year and beat an extremely good horses yesterday,” Cox said.

As Owendale looped past the Blame Stakes competition Saturday, he breezed by, among others, graded winners Silver Dust, Mr. Money and Global Campaign.

“It set up extremely well for him,” Cox said with Backyard Heaven and Diamond King dueling through a half mile in 45.63 seconds over a track that had started taking on rain.

“A one-turn mile off the layoff — that’s always a tough distance. Florent (Geroux) gave him a good trip, and he’s a good horse.”

Cox isn’t stressing the upcoming race decision for Owendale, which could impact another of his top 4-year-olds, Warrior’s Charge. The Razorback Stakes (G3) winner ran second most recently in a stacked renewal of the Oaklawn Handicap (G2).

The speedy Warrior’s Charge has among his options the Stephen Foster and the July 4 Metropolitan Handicap (G1).

“We’ll do what’s best for each horse,” Cox said. “They have totally different running styles, and I’m not afraid to run them against each other.”

Warrior’s Charge finished fourth, one spot behind Owendale, in the 2019 Preakness.