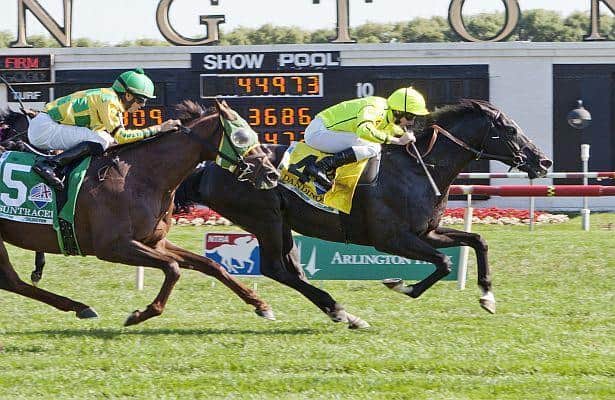 Eight European contestants for the International Festival of Racing at Arlington International Racecourse have arrived on the grounds and are currently in quarantine with an expected release on Tuesday.  Arriving first via an Air France flight at 8:35 p.m. on Saturday was the French contingent of the Niarchos Family's Smoking Sun and Augustin Stable's Sparking Beam.  Smoking Sun is pointing toward the Grade I Arlington Million and expected to be one of the favorites, while Sparkling Beam is a slight outsider aimed toward the Grade I Beverly D.

Arriving via a Qatar Airlines flight at 5:00 a.m. was the English shipment.  Team Valor International's sophomore Euro Charline and Qatar Racing's Just the Judge - both expected for the Beverly D. - joined a third filly in Listed $400,000 American St. Leger contestant Moment in Time.  Three older horses, including Mick and Janice Mariscotti's Havana Beat, Australian Thoroughbred Bloodstock's Dandino and Pearl Bloodstock's Side Glance, were also on the flight.  Havana Beat and defending champion Dandino are expected to join Moment in Time in the American St. Leger, while Side Glance will have a second consecutive go in the Million.

The final flight - from Ireland - is expected to arrive late Tuesday evening and contain the Ballydoyle-based Coolmore contingent of trainer Aiden O'Brien.  Eye of The Storm, Belisarius, Adelaide and Million favorite Magician are expected on such.