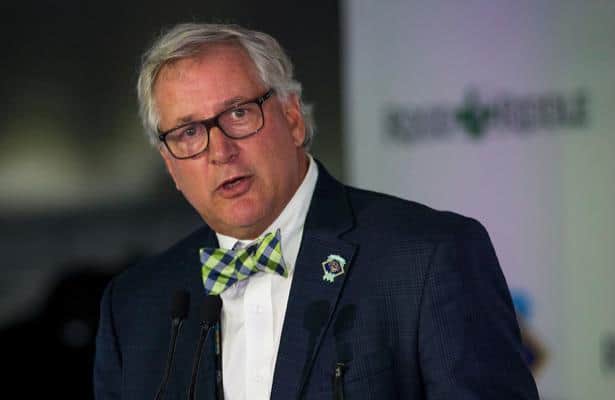 This weekend’s Breeders’ Cup World Championships at Santa Anita will mark the end of Craig Fravel’s tenure as president and CEO of Breeders’ Cup Ltd. Upon his departure from Breeders’ Cup, Fravel is set to become the new chief executive officer of racing operations for The Stronach Group.

In an interview Sunday on San Diego-based radio show Track Talk, hosted by Felix Taverna, Fravel provided insight into his eight years at Breeders’ Cup, why he’s leaving, the decision to keep this year’s Breeders’ Cup at Santa Anita, and the potential for his new role with The Stronach Group.

[ Bet Breeders' Cup with a $150 Hollywood Races bonus! ]
First, the decision to keep this year’s event at Santa Anita. A spike in equine deaths during the past winter/spring season at Santa Anita led to a cascade of negative publicity. It also spurred Breeders’ Cup to consider moving this year’s world championships to a different venue.  Fravel said as the safety issues surfaced, the Breeders’ Cup board met directly with Belinda Stronach, chairman of The Stronach Group, to discuss the reforms being put in place at Santa Anita. The board heard what it wanted.  “You’ve got to give people credit where credit is due. It wasn’t like people were just saying ignore the issues and come over and join us anyway,” Fravel said on Track Talk. “It was look, we’re doing something about it, we’ve done something about it and we’re turning the corner. "The Breeders’ Cup going somewhere else would send entirely the wrong message. When people are trying to do the right thing, you need to stick with them. The entire Breeders’ Cup board was unanimous in that decision and we’re certainly glad to be here.” Fravel, speaking from Santa Anita in Arcadia, Calif., also outlined the accomplishments he is most proud of during his time at Breeders’ Cup. He cited the Breeders’ Cup solidifying its role as a world championship event, expanded television partnerships and bringing the Breeders’ Cup to new venues such Del Mar and Keeneland.  “Unequivocally, we’ve been steadfast at making sure this is viewed as an international championship,” Fravel said. “It’s conducted in America but we want to be welcoming to people all over the world. I think that’s been emphasized since day one.” Fravel’s arrival at Breeders’ Cup in 2011 came around the time ESPN was shedding itself of all horse racing programming. This potentially critical void was largely filled through a deal with NBC. “When I got to Breeders’ Cup our television relationships were fading,” Fravel said. “We were able to enter into a long-term partnership with NBC Sports...they have been incredible partners. They have stuck with us and helped us grow this brand and expand its presence.” Fravel also set a new direction Breeders’ Cup when adding venues such as Keeneland (2015) and Del Mar (2017) as host sites for the world championships. Keeneland will again host the Breeders’ Cup in 2020 with Del Mar following for a second time in 2021.  “We really only had two venues we could go when I started in Churchill [Downs] and Santa Anita,” Fravel said. “The focus was on getting crowds, or reported crowds, of 60 or 70 thousand. We were more interested at the end of the day to exposing the world and promoting other brands in racing. The positive impact a Breeders’ Cup can have on a Del Mar or Keeneland. There were a lot of people who said those couldn’t be done, so I certainly take a lot of pleasure in those being successful.”

Fravel, who prior to joining Breeders’ Cup was president of the Del Mar Thoroughbred Club, said the ability to return to his family in California played a role in his decision to leave Breeders’ Cup for The Stronach Group. “Let’s not kid ourselves. My family has been living at Del Mar the past three years,” Fravel said. “I’ve been speeding back and forth [from Kentucky] so it’ll be nice to at least be living in the same state." Fravel is hoping his vast experience in the industry can help get California racing back on track after its recent struggles.  “I’ve tried everywhere I’ve been to hopefully leave each place better than when I started there,” Fravel said. “I view this next role as probably being one of my last in racing...The first priority is going to be putting California racing back where it belongs as one of the top circuits in all of racing. “It’s been a tough year, but we’re going to do everything we can to make sure we’re back on top.” Taverna also asked Fravel about The Stronach Group’s commitment to racing in California, particularly at Santa Anita. Throughout California racing circles, there are constant murmurs that The Stronach Group would sell Santa Anita’s vast tract of land to developers. “That was one of the first questions we asked, not about my career but about Breeders’ Cup in general -- was what are your intentions for this place?" Fravel said. "Like I said, you’ve got to give credit where credit is due. Someone who is less committed in the midst of some of the bad publicity that was going on and finger-pointing would have said, ‘I don’t need this’ and do exactly what you’re saying. But that’s not the case. "People say you want to sell it. The answer was no. What [Belinda Stronach] told me was if we’re going to do it we’re going to do it right. So I think the commitment is there and that’s been easily demonstrated.”