Our Flash Drive gets 3rd graded win in Bessarabian at Woodbine 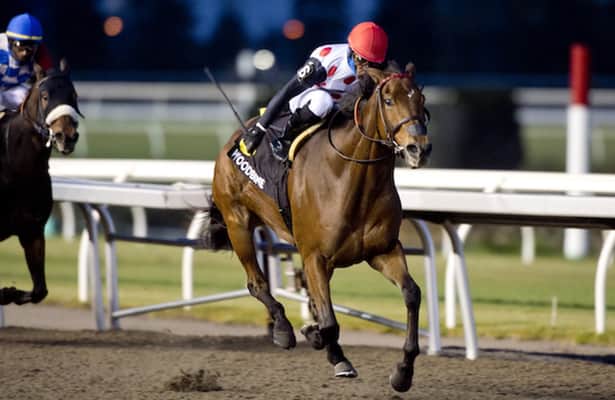 Our Flash Drive watched an early front-end scuffle unfold and then delivered a knockout blow down the lane in Saturday’s Grade 2, $176,550 Bessarabian Stakes at Woodbine.

Lorena, Hazelbrook and Loyalty all broke sharply at the start of the 7-furlong main-track race for fillies and mares, 3-year-olds and upward. Lorena eventually claimed the top spot then led her eight foes through an opening split reached in 23.25 seconds.

Sweet Enough, at 31-1, then burst through along the rail to hold a head advantage after a half in 45.44, as Patrick Husbands, aboard Our Flash Drive, the 8-5 choice, kept his charge running comfortably and unfettered in sixth spot.

When the field navigated the turn for home, Our Flash Drive was plugged in and ready to pounce, effortlessly gliding past her rivals and then turning on the jets to dash away from her foes.

Ahead by two lengths at the stretch call, the 4-year-old daughter of Ghostzapper, bred and owned by Live Oak, breezed home a 5 3/4-length winner in a time of 1:20.76. Hazelbrook edged Loyalty for second, and 54-1 Awesome Treat was fourth.

Our Flash Drive came into the Bessarabian off a strong runner-up performance in the Ontario Matron (G3) on Oct. 22.

“I was getting the perfect trip down the backside (Saturday), trying to find out where Ortiz (jockey, Jose, aboard Artie’s Princess) is. I just tipped out at the top of the lane. Actually, she ran a winning race (in the Ontario Matron). That horse (Kate’s Kingdom) just followed me and caught me.”

It was third graded-stakes score for Our Flash Drive, who took last year’s Selene (G3) and Ontario Colleen (G3). The well-traveled Florida-bred also won the De La Rose Stakes this August at Saratoga.

Trained by Martin Drexler for owner and breeder Franco Meli, the 4-year-old daughter of Souper Speedy was full of run down the lane to record her third career score and first graded-stakes victory in the 1 1/4-mile Tapeta test for fillies and mares, 3-year-olds and upward.

Settled into fifth early by Civaci, Il Malocchio, sent off at 9-1, watched an early scramble for the lead develop, as 2-1 choice Transient, with Jose Ortiz in the irons, eventually struck front after leaving from the outside post 11 and then proceeded to take her 10 rivals through an opening quarter in 23.93 seconds.

Transient was a half-length on top through a half-mile reached in 47.12, while Il Malocchio, still fifth, was yet to be given her cue from Civaci.

As the field turned for home after three-quarters in 1:11.82, Transient was under pressure from Angelou to her outside, while Il Malocchio kept gaining on the leaders, moving into third position at the stretch call.

With Angelou and Transient matching strides, Il Malocchio blew by to earn a one-length victory in a time of 2:02.55. Angelou bested Transient by half-length for the runner-up spot, while Silent Causeway rallied from far back to secure fourth.

The Ontario-bred came into the Maple Leaf having gone 7: 0-3-1 on the season.

“First of all, she’s enjoying the cooler weather for sure,” Drexler said. “She had a couple little setbacks in the summer. I also thought she got the perfect trip today. It was a perfect setup right from the beginning. She sat just off the pace, there was a little bit of pace to run at, she saved ground, and the rail was good today. It just really set up for her. She’s just been always on. Some days, she struggles in the heat a bit. This weather and the type of track we had today, I think she enjoyed that.”

Meli, who turned 50 on Sunday, was equally pleased with the filly, who won the 2020 edition of the Victorian Queen Stakes and last year’s Bison City Stakes.

“For some reason, I was very confident,” offered Meli. “It was the distance. The mile and a quarter I thought would really help her, and the cooler weather. I knew she had a really rough summer.”