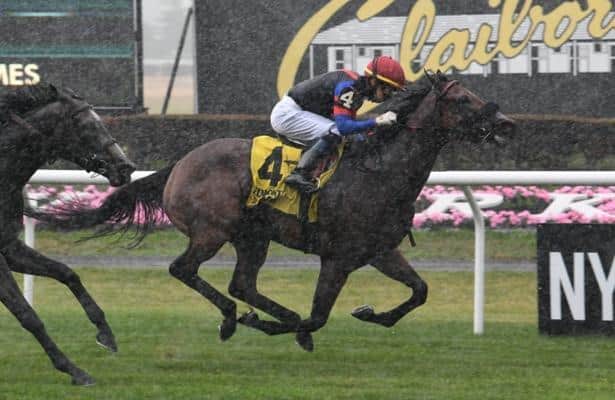 Trained by Ray Handal, the 4-year-old Point of Entry turf specialist arrived at the six-furlong inner turf sprint from a pair of troubled trips when sixth in the Captiva Island in March at Gulfstream Park and a last-out fourth, elevated to third, in an optional-claiming sprint May 30 at Churchill Downs.

With Jose Ortiz aboard for the first time, I'llhandalthecash enjoyed a perfect trip, tracking the early foot of Miss Auramet through an opening quarter mile in 22.02 seconds on the inner turf course rated firm.

I'llhandalthecash took command through a half in 45.56 as Miss Auramet gave way and longshot A Great Time, at 33-1 under Hall of Famer John Velazquez, worked her way into contention.

I'llhandalthecash maintained a length advantage at the stretch call as Dalika, the even-money favorite under Joel Rosario, launched an all-out bid from last with a stubborn A Great Time still in the mix. Under urging from Ortiz, I'llhandalthecash stayed the course for a half-length win in a final time of 1:09.11. Dalika completed the exacta, three-quarters of a length the better of A Great Time.

Rounding out the order of finish were Getmotherarose, Souper Escape, Escapade, Bridlewood Cat and Miss Auramet.

The victory marked the second stakes win of the 25-day Belmont spring/summer meet for the 31-year-old Handal, who previously captured the Easy Goer on June 25 with Celtic Striker.

Handal credited the victory to his rider for a smart in-race decision.

"Jose called an audible,” Handal said. “We were thinking about taking back when we talked about the game plan.

"When they broke, they didn't show any speed from the outside, so he just said, 'I'll put her in the game' and initiated early. She's been stopped so many times in her races, he just wanted to give her a clear shot at it.

"Kudos to Jose for calling that from the gate. With the rain coming down, just keeping her in the clear and giving her a shot; I thought it was a smart move on the backside, everyone was trying to get better position, and she was up there, so it was really a heady ride and it paid off."

It was the third consecutive License Fee score for Ortiz, who won in 2018 with Lady Alexandra and last year with Fire Key.

Ortiz said he had confidence in I'llhandalthecash to handle the early tempo.

"I knew the six (Escapade) and the seven (Miss Auramet) had speed," Ortiz said. "I saw the seven broke really well and the six took back a bit. I said, 'if the six doesn't go, it's going to be a slow pace,' so I took advantage and I just rode her like the best horse."

Rosario said he was pleased with the strong closing kick from the graded stakes placed Dalika.

"She came running at the end and made a big run," Rosario said. "I was impressed with the performance. It looked like they were going fine. I got a little further back than I wanted to in the middle of the race, but she came running after them and did really well."

A $150,000 purchase at the April 2018 OBS Spring Sale of 2-year-olds in Training, I'llhandalthecash is out of the stakes winning Ghostzapper mare Sudden Ghost.