Ortiz Jr. to ride at Belmont Thursday, 2 weeks after spill 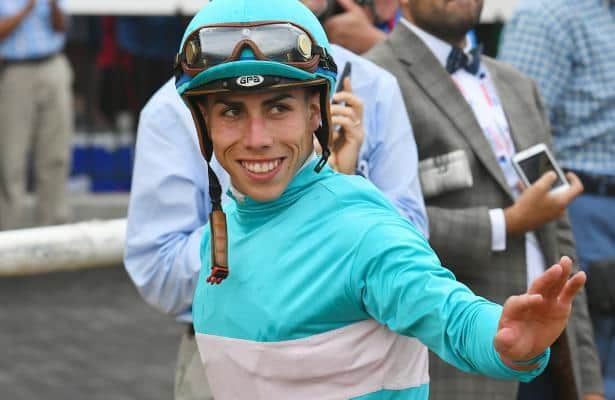 Irad Ortiz Jr., who has been sidelined since a June 3 spill at Belmont Park that left him hospitalized, is named to ride four horses on the Thursday program at Belmont Park.

The three-time reigning Eclipse Award winner is set to ride three horses for trainer Rob Atras and one for Danny Gargan. Ortiz's mounts consist of Bee Bit in the second race, a $32,000 claimer going seven furlongs on turf; Kreesie in the third race, a second-level allowance for New York breds; Trash Talker in the fourth race, a $40,000 claimer; and Ice Princess in the eighth race for Gargan, an entry-level allowance on turf.

Two days before the June 5 Belmont Stakes program, Ortiz was on the lead in the stretch aboard Equal Pay when his mount appeared to take a bad step. Ortiz was bucked off Equal Pay and then appeared to get stepped on by a trailing horse.

Ortiz was sent to nearby North Shore Community Hospital where he was treated for cuts and bruises, but a CT scan and X-rays all came back negative. He was forced to miss 12 scheduled rides on the stakes-filled Belmont Stakes program, including Known Agenda in the main event.