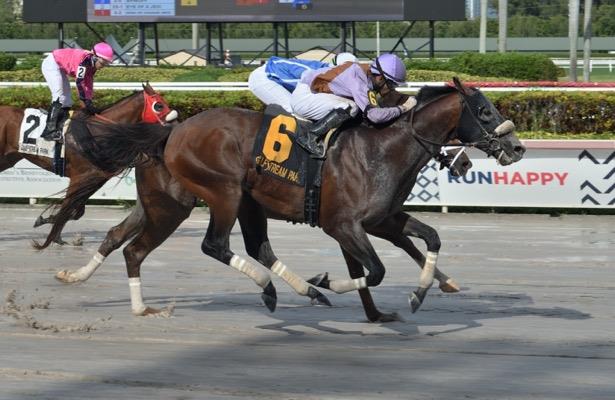 Matz, an accomplished equestrian who competed at three Olympics, gained fame in the thoroughbred industry as the trainer of 2006 Kentucky Derby winner Barbaro and added a second American Classic win with Union Rags, who surged up the rail to collar Paynter in the 2012 Belmont Stakes.

Just Whistle, a 5-year-old son of Pioneerof the Nile, is lightly raced with a record of 3-3-1 from 12 career starts. The veteran horseman said he has always held the late-developing horse in high regard.

"We've always thought he had a lot of ability," Matz said. "When he was younger, he had a lot of little things, like bone bruising, that hopefully now that he's older have grown out. He seems to be a little more consistent this year and I hope he keeps it up."

Just Whistle will tackle the one-two-three finishers of the 2019 Belmont Stakes on Saturday when he squares off against Sir Winston, Tacitus and Joevia.

The talented bay added blinkers two starts back when rallying to be second in the Hal's Hope (G3) at 1 1/8-miles at Gulfstream Park and arrives at the Suburban from an impressive score in the nine-furlong Sunday Silence held May 17 on a sloppy Gulfstream Park main when a neck the better of graded-stakes placed Spinoff.

"Since we put the blinkers on, he seems to have matured and settled down,” Matz said. “Hopefully, we can have a little more consistency this year.”

Just Whistle will exit post 7 under Belmont spring/summer meet leading rider Irad Ortiz, Jr. in the Suburban, which is slated as the last of 11 races on Saturday's Runhappy Met Mile Day card.

"Every jockey that comes back on him has certainly earned their money,” Matz said. “They have to ride him the whole way. He's just laid back and that's him. He's a grinder that hopefully there's enough speed in the race that they'll come back to him.

"We were lucky to get Irad. We'll keep our fingers crossed that there's enough speed in the race and that Irad ate his Wheaties that day."

Ortiz, Jr., who has captured the Eclipse Award for outstanding rider the past two seasons, last piloted Just Whistle in the 2019 Pimlico Special (G3).

Matz noted that Runnymede Racing's Postulation, a Grade 3 winner with $551,411 in purse earnings, is nearing the start of his 8-year-old campaign.

The Harlan's Holiday gelding, bred in Kentucky by Juddmonte Farms, captured the 2017 American St. Leger (G3) at Arlington Park and last year added the Presious Passion to his ledger in his seasonal debut in August at Monmouth Park

Matz said Postulation could make his return in the Elkhorn (G2) slated for July 12 at Keeneland.

"He's doing well,” Matz said. “We're just looking for a race for him.

"We might consider the Elkhorn for him. He runs well fresh, so we'll see what happens. This year we gave him the whole winter off and he's almost ready to come back. He was pretty consistent last year and hopefully we can find a couple races for him this year."

"This is the first time we got her to go two turns and she did it well," said Matz. "She's a Canadian-bred and she's nominated for the Oaks up there. I'm not sure if we'll get another race into her in-between, but we'll take a look at what horses go in the Oaks. Being that it's a mile and an eighth, I think it will suit her real well."