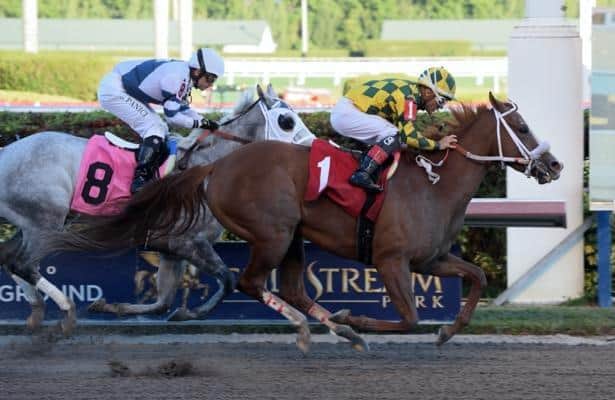 The 38th running of the Grade 3, $100,000 Sugar Swirl offers the promise of an early clash among several high-speed fillies and mares Saturday at Gulfstream Park.

Trainer Joe Orseno, trainer of Northwind Thoroughbreds LLC’s Ms Meshak, is one who is particularly interested in how the early going of the six-furlong sprint shakes out.

The Sugar Swirl is one of five stakes on Saturday’s program that will feature the $100,000 Harlan’s Holiday (G3) and $200,000 Fort Lauderdale (G2), preps for the Pegasus World Cup Championship Invitational Series at Gulfstream on Jan. 25.

Ms Meshak, who usually does her best running late, figures to have a good view of the highly anticipated clash of speed types. The versatile 4-year-old daughter of Shackleford, a winner on both dirt and turf, has won three of five starts at the distance, each time rallying with a strong kick.

“She really does anything I want her to do,” Orseno said. “I think her best races are when she can sit just a little bit off of it. The key to her is if she can get a good first quarter on her own and be relaxed.

“That’s what we’re trying to do, and she finishes a lot better.”

In her most recent start over Ocala’s synthetic surface, Ms Meshak lacked her usual late kick while finishing third in the $125,000 OBS Sprint, 4 ½ lengths behind A Bit of Both.

“She went to a sale in Kentucky, but she didn’t sell, and they sent her back to me,” Orseno said. “I lost 13 days training her and we ended up running in the race in Ocala. She came up short on me, but I think she could have won the race.”

Cristian Torres, who rode Ms Meshak to a sharp 2 ½-length score in the Added Elegance at Gulfstream in July, has the mount.

A Bit of Both’s triumph in the OBS Sprint was her sixth victory in her last seven starts. Trained by Jason Servis, the 3-year-old daughter of Paynter, has won stakes on both turf and dirt.

Paco Lopez has the return mount aboard the multiple stakes winner.

Lady’s Island will seek her fifth straight victory in the Sugar Swirl. The Georgina Baxter-trained 5-year-old mare, who has also won on turf and dirt, turned in a dazzling 13 ½-length victory in a starter allowance at Saratoga two starts back.

Emisael Jaramillo has the return mount aboard the Florida-bred daughter of Greatness.

Heavenhasmynikki is slated to make her first start since finishing off the board in the Breeders’ Cup Filly & Mare Sprint at Santa Anita on Nov. 2. In her previous two starts, the 4-year-old daughter of Majestic Warrior won an Ohio-bred stakes at Thistledown before scoring a front-running victory in the Vagrancy (G3) at Belmont.

Tyler Gaffalione has the call.

Bronx Beauty overcame a slow start and early pressure to capture the Regret at Monmouth Park in her most recent start. The Anthony Margotta Jr.-trained 4-year-old filly, who finished fourth in the Sugar Swirl over a sloppy track last season, has won seven of 11 starts on a fast track.

The daughter of Liason will be ridden by Jose Ortiz.

Matalona Thoroughbreds LLC’s Stormy Embrace, who has won back-to-back runnings of the Princess Rooney (G2) at Gulfstream, will be looking to get back on track after back-to-back fourth-place finishes.