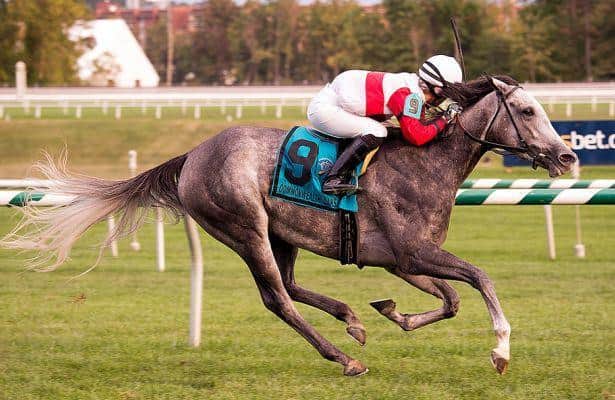 Looking to build off a stellar 4-year-old debut in May, graded stakes winner Onus will headline a field of 10 in the $100,000 Perfect Sting for fillies and mares going one mile on the Widener turf course at Belmont Park on Saturday.

A gray or roan daughter of Blame trained by Hall of Famer Shug McGaughey for owner Stuart S. Janney III, Onus has won three out of her last four starts including a victory in the Grade 3 Common wealth Oaks last September at Laurel Park.

Following that win, she ended her year in the Grade 2 Mrs. Revere Stakes at Churchill Downs encountering a difficult trip to finish ninth. Set down after the race, Onus made her return in her first career start at Belmont on May 21 where she impressively won an optional claiming race by 5 ½ lengths while picking up a career and field high Beyer Speed Figure of 101.

In her most recent breeze in preparation for the Perfect Sting on June 26, Onus picked up a bullet after completing four furlongs in 46.70 seconds on the Belmont main track.

"She came out of a good race off a layoff," said McGaughey. "She was just a little banged up after the Miss Revere last year so we just elected to give her some time for the winter and it's worked out well so far. She worked well the other day so I think it's a good spot for her. If she's not on the lead she'll be close to it."

With leading meet rider Jose Ortiz in the irons, Onus will depart from post position 8.

Trainer Christophe Clement will saddle a pair of runners in French-bred Stormy Victoria, A 4-year-old for Tango Uniform Racing and Notte d'Oro, 5-year-old for owner Robert S. Evans. After making a successful North American debut taking an optional claiming race at Belmont on April 29, Story Victoria followed last out finishing fifth in the Grade 2 Nassau Stakes at Woodbine Racetrack on May 29. A victim of perennial tough trips in her three starts this year, Notte d'Oro will look to rebound most recently finishing fourth in the $150,000 Intercontinental Stakes at Belmont on June 9.

"They are both doing and training well so we're giving each a shot," said Clement. "It's obviously a very tough race with Mr. McGaughey's Onus running but we'll try for the best. I thought Stormy Victoria ran well last timeout. She lacked a little bit of racing luck but she ran a nice race. She came back in good shape and has been training forwardly. Notte d'Oro got beat at Belmont but she also ran a nice ran so we're not discouraged."

Drawing post 2, Stormy Victoria will be ridden by Joel Rosario and to her outside in post 3 Notte d'Oro will leave with Hall of Fame rider John Velazquez.

Mississippi Delta for owners Mike Rutherford, Terry Green and trainer Mark Casse will look to be a legitimate threat picking up a pair of second-place finishes in the Grade 2 Nassau Stakes at Woodbine and the Grade 2 Honey Fox at Gulfstream Park last April. A 4-year-old daughter of Giant's Causeway, she most recently ran to a sixth-place finish in the Intercontinental Stakes at Belmont on June 9.

With Junior Alvarado aboard, Mississppi Delta will leave from post 7.

Rounding out the field are My Sweet Girl for trainer Barclay Tagg and owner Joyce B. Young, most recently coming off a fourth-place finish in the Miss Liberty Stakes at Monmouth Park on May 29; Distorted Beauty for trainer Bruce Leine and Bloodlines Racing Partnerships; Cali Thirty Seven for trainer Joeseph Orseno and owner Robert McLynn; Tammy the Torpedo for trainer Chad Brown and Long Lake Stables; Old Harbor for trainer Russell Cash and owner Joseph Birnbaum, and Miss Ella for trainer Graham Motion and owner Jack Swain III.