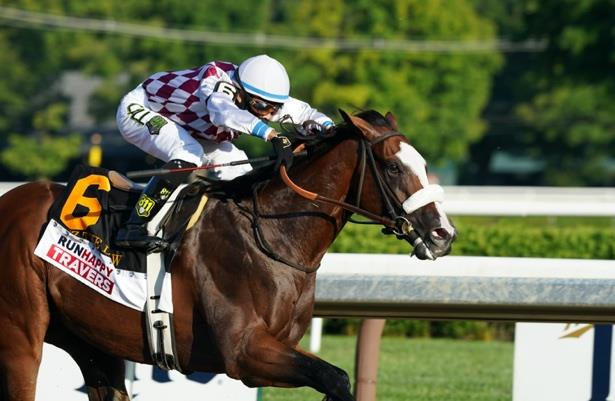 Tiz the Law is the clear favorite going into the 2020 Kentucky Derby. The colt has proven himself on the biggest stages of the strange 2020 racing season, winning both the Belmont Stakes and Travers (G1), the latter at the Derby’s 1 1/4 mile distance.

The son of Constitution could face up to 19 opponents in the Run for the Roses, including a handful that would seem to have a real shot at victory. Several connections across the probable Kentucky Derby field recently spoke of Tiz the Law standout season, most of them in glowing terms.

“Tiz the Law is one of the best horses in the country,” said Javier Castellano, jockey for Caracaro, who finished second to Tiz the Law in the Travers. “He's developed and had a lot of great, great races in the past in the Holy Bull, the Florida Derby and the Belmont.”

Luis Saez was aboard Uncle Chuck, who is undecided about the Kentucky Derby, in the Travers and led through the the first half until Tiz the Law ran him down through the far turn.

“I thought we were going to get away from him after a half-mile,” Saez said. “But Tiz the Law was right there and just kept on going.”

Elsewhere this past racing weekend, Art Collector took the victory in the Ellis Park Derby and his connections were asked about the showdown looming in the Kentucky Derby.

The son of Bernardini’s owner, Bruce Lunsford was complimentary of both Tiz the Law and his trainer.

“I know Barclay [Tagg] pretty well because he sits next to me at Saratoga,” Lunsford said. “He’s a phenom. And I’m not allowed to tell how old he is, but for those of you who know, he’s a phenom and for me to be in the company of a gentleman like him is special.”

However, Lunsford said he believes in Art Collector and isn’t intimidated by Tiz the Law’s recent dominance.

“I’ve seen a lot of horses through the years come to Churchill Downs,” Lunsford said. “I don’t necessarily think the horses he’s run against are a whole lot better than what we’ve gone against.”

Rounding out the Art Collector contingent was jockey Brian Hernandez Jr., who will be making his third appearance in the Kentucky Derby, after finishing 12th on Tom’s Ready in 2016 and 8th on McCracken in 2017.

Hernandez also complimented Tiz the Law, emphasizing that he felt Art Collector still has a chance in the race.

“Tiz the Law will be the favorite but everybody that’s going to be there to the Kentucky Derby, they’ve all earned their chance,” Hernandez said. “You have to go in there with an open mind and just go in there and read your race.”

The Kentucky Derby is scheduled for Sept. 5, after being delayed from its traditional date of the first Saturday in May because of the COVID-19 pandemic.