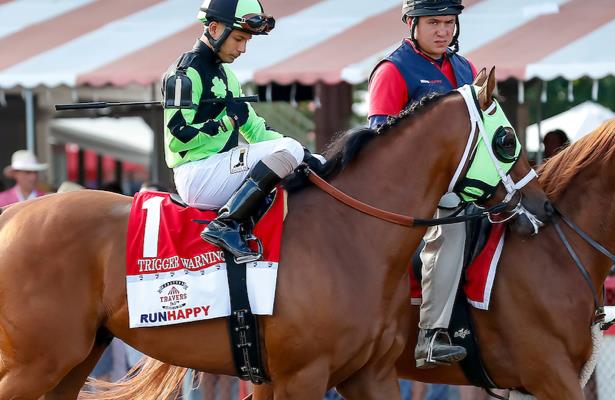 Trigger Warning, who won Monday's Steel Valley Sprint in a photo finish one race after contending in the Breeders' Cup Dirt Mile, did not survive a condylar fracture in his left-front leg after crossing the wire a nose in front.

Owner Jim Thompson said he and trainer Michael Rone drove the 3-year-old son of Candy Ride, who also ran in this year's Travers Stakes (G1) and Pennsylvania Derby (G1), 5 1/2 hours after the race for surgery at the Rood & Riddle Equine Hospital in Lexington, Ky.

“We all thought he would be OK — that he could even get back to racing — but this morning, (Dr. Larry Bramlage) called me and said the X-rays show more damage, and it doesn’t look good," Thompson said.

“I told him I do not want this horse to suffer, but I want to save him if I can. He called and said, ‘Jim, I don’t even think he can be pasture-sound. It’s that bad.’”

Trigger Warning banked more than $555,000 from his 16 starts, earning his tries in Grade 1 competition after running third in the Ohio Derby (G3) at 86-1 and second by a head in the Indiana Derby (G3) at 12-1. The colt set all the fractions in the $250,000 Steel Valley Sprint, narrowly holding off Bobby's Wicked One as the two bumped in deep stretch.

“That fracture — I’m saying — if you look at the replay, it obviously happened before (the wire)," Thompson said. "He finished with that fracture, and that’s probably why it tore it up so bad. He left it all on the track for us — special horse."

Trigger Warning is the highest-earning runner for both owner and trainer. Rone, a former blacksmith, said, "God put that horse in my life for a reason -- to give me a taste of what it's all about. I will honor that moment."

“I just started doing this 18 months ago — started basically with him and a Pioneerof the Nile colt," he said. "I ended up with nine horses, but he’s the only one I picked out on my own. I didn’t know anything about horses, honestly. I just had a gut (feeling) about him.”

Trigger Warning died a year to the day after he broke his maiden third out at Turf Paradise. Thompson didn't anticipate then the places he'd go with the horse.

“I think I’m going to build something on his legacy," Thompson said. "...We’re supposed to keep going. This horse came into our lives and touched us. I’ll stay with it, but he was definitely a special horse. He was one of a kind.”