On roll of a lifetime, Servis says chatter is 'embarrassing' 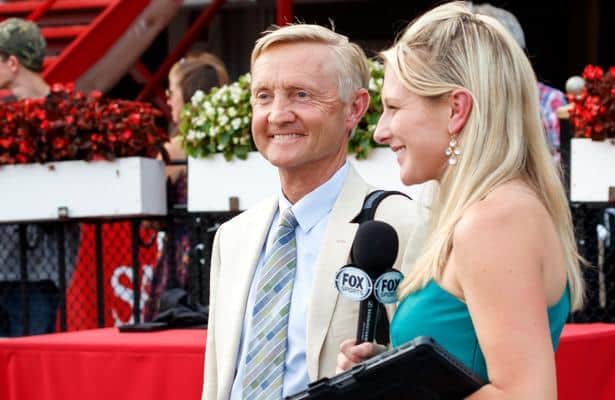 Jason Servis is on the best run of his career, with the trainer who hits at 24 percent lifetime reaching even higher numbers early this summer. Then Saturday, Firenze Fire put an exclamation point on the barn’s roll with a commanding victory in Belmont Park’s Grade 3, $300,000 Dwyer Stakes.

But by Sunday, Servis wasn’t celebrating. He was venting, calling the conversations about his success — and allegations on social media that he’s potentially cheating — “embarrassing.”

“People are talking a lot of shit,” Servis said, “and I’m really not happy about it.”

Now in his 60s, Servis began training in 2001 after working around horses for many years before that. He quipped that, “I’ve only been training about 20 years. Am I getting better at it? Probably. I’m just on an unbelievable run right now. Some of the horses are winning, and they’re surprising me.”

It’s showing, as heading into Sunday, Servis was 19 of 35 (54 percent) at Monmouth Park’s current meet and 17 of 35 (49 percent) at Belmont. Overall this year, his horses have won 34 percent of their races, with 66 percent of starters in the money, according to Equibase.

“I’ve got my kids telling me they’re saying stuff on Twitter. I don’t tweet, so I don’t know anything about that,” Servis said. “It just doesn’t really feel that good. It’s like I have to root for the horses to run bad.”

Servis credits both his spotting of horses — “if I can’t be 3-1, I don’t really want to be in there” — as well as clients who allow him to be patient for his general success. Among others, he works with Michael Dubb, Ron Lombardi’s Mr. Amore Stable and Monmouth Park executive Dennis Drazin, whose Sunny Ridge rolled to a win in Belmont Park’s State Dinner Stakes on Friday.

Allegations against Servis aren't new. In 2009, Andrew Beyer listed Servis in The Washington Post among his list of tongue-in-cheek "miracle workers."

Those trainers, Beyer wrote, "compile winning percentages that dwarf the records of horsemen enshrined in the Hall of Fame. They acquire horses and transform them in ways that history's greatest trainers never dreamed of."

Servis has also been associated with drug positives. But in 2017, when longtime turf writer Ray Paulick revealed many positives were thrown out due to Florida state incompetence, Servis appeared on a list with the well-regarded Todd Pletcher, Mark Casse and Kiaran McLaughlin.

“By the end of the year I’ll probably be back down to 26 or 25,” he said of his win percentage. “It’ll be back to normal, but I have been on an unbelievable roll.”

Amid the chatter about his methods, the trainer added, “I’ll just press on.”