On eve of retirement, Mutamakina proves a winner for Clement 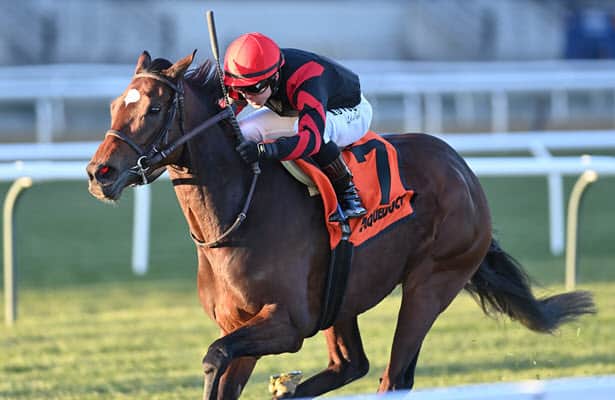 The 5-year-old daughter of Nathaniel defended her title in the Long Island, which she won last year when collaring stablemate Traipsing up the rail in the final strides. Mutamakina saw added ground in this year’s Long Island, which was moved from 11 to 12 furlongs.

“I’m still enjoying the win,” Clement said. “I’m very grateful for the owner, and hopefully we can be lucky again.”

Her career reached new heights when transferred to Clement in New York, finishing a troubled third in last year’s Zagora at Belmont over yielding turf en route to her first Long Island score to close out her 4-year-old campaign.

After three losses at Belmont at stakes level to launch her 2021 season, including a second in the Sheepshead Bay (G2) and a third in the River Memories, Mutamakina went on a three-race tear, traveling to Woodbine Racetrack to capture the Dance Smartly (G2) and E.P. Taylor (G1) ahead of this year’s Long Island.

“She had a real career in the states. It was a great decision on their part to send her here because she improved her resume by coming here,” Clement said. “When things work out with staying fillies like her, these things happen. She’s talented and an above-average horse and, like most horses, she got better as she got older.”

Dylan Davis, undefeated aboard Mutamakina, piloted the mare to all four of her triumphs in North America. She provided Davis with his first Grade 1 win by besting stablemate La Dragontea by a neck in the E.P. Taylor in October.

“I got aboard her because Kieran Lalor, the racing manager for Al Shira’aa Stud, really wanted me to ride her after I rode her in last year’s Long Island,” Davis said. “She had different riders in between then, but once I got back up on her this summer, we hooked back up. She was my first Grade 1 winner, I went 4-for-4 on her. How much better can you get than that? I’m going to get a nice big picture of her and put it in my house.

“She’s pretty straightforward,” Davis continued. “She was actually a little more on edge at Woodbine. She’d be more on it those first couple of jumps out of the gate. After that she would settle down, but over here she was more relaxed.”

Mutamakina is slated to ship to Ireland for a broodmare career, where she will be bred to Dubawi.

Bred in Great Britain by Widgham Stud, Mutamakina is out of the Danehill broodmare Joshua’s Princess. Her fourth dam is 1995 European Horse of the Year Ridgewood Pearl, who captured that year’s Breeders’ Cup Mile at Belmont Park.